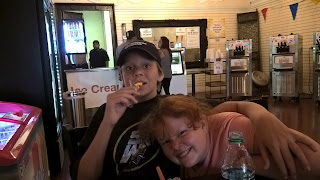 So, Mate and I made it down to San Diego in eight hours.

We were all smug, right? EIGHT HOURS! That's why you leave at six-thirty in the morning, bitches! THAT'S how you get it done!

Well, Saturday night (the RITA's-- congrats to Alexis Hall and Sarina Bowen/Elle Kennedy for being the first to win RITA's with LGBTQ books btw!) I got to bed understandably late. I spent the after party with Margaret, Karen and a host of wonderful people who were willing to listen to my goofiness and very impressed with my knitted sock. I loved that conversation-- wouldn't have traded it for the world--but it did mean Karen and I left a little late the next morning.

I was NOT prepared for the 5 1/2 hours it took for us to get over the pass--and how miserable that driving would be. Karen drove for a HUGE bit after that, and then I finished up--and I'm telling you, we talked the whole time. The company was amazing (I have been gifted--TRULY blessed--with some awesome drive time mates this year--Kim Fielding, Christopher Koehler, Karen Rose--I would have been lost without these people!)

Anyway-- by the time I got home, I was, shall we say, a wee bit fried.

Today, we took Karen to go get her rental car-- and stopped in Old Sac as well. Alas, Darrin was not there, but the people at Candy Heaven treated us well anyway, and Karen was very impressed. (But thought the scary clown was WAY TOO SCARY.)

While we were at Candy Heaven, I realized I'd left my wallet/phone back in the car, and I had to haul my fat, slow ass to the car and back.  Karen was gracious enough to wander with my kids and check out GWhilikers (a toy store) and then take them to ice cream. They seemed to have had the best time--and on the whole, going to the airport has never been so much fun.

But I have to admit--I'm sort of done driving by now.

Like, if I didn't have to get in a car again for a week, I wouldn't miss it.

Which is good--because I've got a month's worth of work on my desk.

But it HAS been a wonderful time.
Posted by Amy Lane at 12:13 AM