Happy Release Day and Blog Tour for Fish Out of Water 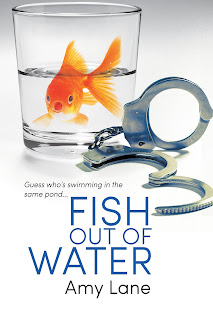 PI Jackson Rivers grew up on the mean streets of Del Paso Heights—and he doesn’t trust cops, even though he was one. When the man he thinks of as his brother is accused of killing a police officer in an obviously doctored crime, Jackson will move heaven and earth to keep Kaden and his family safe.
Defense attorney Ellery Cramer grew up with the proverbial silver spoon in his mouth, but that hasn’t stopped him from crushing on street-smart, swaggering Jackson Rivers for the past six years. But when Jackson asks for his help defending Kaden Cameron, Ellery is out of his depth—and not just with guarded, prickly Jackson. Kaden wasn’t just framed, he was framed by crooked cops, and the conspiracy goes higher than Ellery dares reach—and deep into Jackson’s troubled past.

Fish Out of Water is Available from

Blog Tour for Fish Out of Water--

*Note-- This is not the definitive list--I will continue to add to this and repost it as the tour goes on. These are just the people who have reported to me with links so far.  Not all of these go live at the same time.  *sigh* Remember that post about the assistant? Yeah. That.

Long and Short of It Reviews-- A Cat and a Fish


And now a few words about Fish...

I've said this on a couple of the blog sites for the tour, but I'll tell it again here for good measure:

A lot of this stems back to my childhood when my father got pulled over a lot.  It was the early seventies, and he was a tall scary looking guy with curly hair and a beard. (Big T is his spitting image actually, but Big T's hair is a lot more red.)

My dad drove a primer green Volkswagen Bus-- customized in a lot of ways, including green and white American flags which he used as curtains.  (They were a symbol of peace, and you know, I sort of wish we had some of those now!) It was a great vehicle for taking kids camping when there were no seat belt or safety seat laws and you didn't care about seeing the pavement rush under your foot whenever you used the clutch, and it was a cop magnet. CHP, local police--hell, we even got cased once by the FBI.

Two things saved my dad from being incarcerated for driving as a hippie  that last time. One of them was me. The other was the deaf Dalmatian dog protecting me. The third thing might have been that when they asked him where my mother was, he had to say the looney bin, so yes, that was me again, they just didn't want to bother with the kid in the back.

That sort of thing leaves a mark.

I have rarely trusted policemen.

There have been some memorable exceptions.

Once I got out of the theatre after breaking down the set to find my fuse had blown and I had no headlights, the local Sheriff who's daughter had been in my graduating class drove in front of me with a spotlight, so I could get home at two a.m. and my dad could fix it in the morning.

Yes, he knew who my dad was. Yes, he knew he worked on cars. Yes, the town was that small.

My husband's assistant coach for four years of coaching soccer was a policeman, and a genuinely nice (if scary competitive) guy.

Once I was standing in my classroom and a CHP officer walked in, fully dressed in uniform, looking stern. I looked at him suspiciously, and said, "Who are you here for?" totally prepared to advocate for the poor kid who would be locked in this asshole's grasp.

"You, Ms. Lane--Don't you remember me? I graduated four years ago!"

Yeah-- THAT guy, I trusted.

But seriously-- it's a short list. Those who have been following me for a while know it, too. Last year, when meth-cooking squatters moved in next door, pretty much ALL OF YOU said, "Darling, I know this will burn like acid, but you have to call the police."

It didn't actually burn like acid, but watching them all gather around the house next door while they threatened to shoot the guy on the roof did not inspire me with confidence either.

When reports started to emerge across the nation that people of color were being victimized by the police, I was not surprised. I had seen the rampant disrespect in person, to friends and  students and I'd been appalled and helpless to stop it.  I was relieved that the issue was gaining national attention, because hopefully that would mean racial injustice at the hands of the authorities could be stopped.

But I still have hope--I really do.

There ARE people like Jackson out there. That kid who came back into my classroom, wearing his uniform, proud as hell--he wasn't going to go out and beat up the people he grew up with.

We need more people like that in the uniform.

So Fish is a reflection of how things are, and how bad they can be--but I also wanted it to be a hope that they can get better.

I hope people see that fervent wish for better in the pages.  We need all of it we can get. 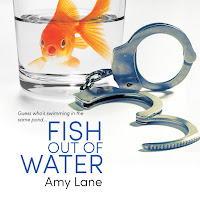 
He found Dave and Alex out by the parking garage behind the ambulance entrance, sharing a cigarette break.

That was pretty much where he expected to find them this time of day, because they would have screwed each other silly in Alex’s car for the first part of their lunch, and this was their comedown. You learned a lot about the nurses who took care of you on a daily basis.

Dave had given him his twelve-o’clock painkillers and had talked about taking his break with his boyfriend. Alex had changed his catheter bag at two, and he’d always looked freshly laid. It hadn’t been that hard to put together.

“Hey, handsome—you taking care of our property?” Alex asked as Jackson trotted out of the parking garage to greet them. Alex—tiny, perky, and blond as a cheerleader—smoked like he was about to hide the cigarette from his mother.

“It’s not yours anymore,” Jackson said, smiling. “The hospital gave me a full lease on the equipment when I left. You remember the paperwork?”

“Oh no, honey.” Dave was taller, wider, darker in hair and skin, and built like a tank; he wielded his cigarette like a magic wand and camped like a Boy Scout. “We don’t do paperwork.”

Jackson rolled his eyes. “Who needs paperwork when you bitches put out in person, right?”

“You know it, baby,” Alex purred. He drew hard on the cig and then crushed it out in the sand pit. After he’d exhaled smoke, he stepped forward and shook Jackson’s hand. Some of the cheerleader fell away and he gave a genuine smile. “How you doing, hon?” he asked seriously. “The whole hospital is talking about your friend this morning—apparently you stepped on Dr. Snidenhower’s toes.”

The boys knew Kaden, Rhonda, and Jade—they’d been his only visitors over those months of recovery. Jackson had seen Alex and Dave working as he’d been pulling the strings that got K out of the hospital and into the jail—and he’d been grateful.

“Yeah, well, that guy was a jerk when I was here,” Jackson muttered. Hence the nickname Snidenhower. Jackson had it on good authority that Alex and Dave were the only reason he wasn’t walking around with a colostomy bag under his belt. Scheideman was a little overzealous with requesting surgery, and apparently both of Jackson’s boys—as he’d called them by the end—had lobbied fiercely to let Jackson’s body try to heal first.  It was a thing for which Jackson would forever be grateful.

“The guy’s a jerk anyway.” Dave flicked his ash into the sand pit, dark fingers curving gracefully. “But that’s not what you’re here to talk about, is it.”

Jackson shook his head. “You know what I’m here to talk about?”

Dave looked over his shoulder to see if anyone else was coming out to the back bay to nurture their filthy habit. Nobody so far, so he gestured Jackson in with a jerk of his chin. “Your boy? The friend who caught the po-po bus? So, Scheideman got pulled off that poor dead kid in the cop’s uni—he was trying to resuscitate him because he didn’t have the balls to call TOD.”

Nobody wanted to call TOD on a cop. Nobody.

Dave tsked his impatience but kept going. “So Doc Memphis called TOD, but Scheideman got sicced on Kaden, the hot guy with the cute kids.”

“There was a wife too,” Jackson supplied dryly, mostly to see Dave roll his eyes.

“Right. Anyway, so a guy—not in uniform, but smelled like bacon if you know what I mean—he grabs Scheideman’s arm on the way down the hall, and he’s talking like they’re planning a terrorist attack. Anyway, I got into the room about two steps after them. You were at reception raising six sorts of hell—baby, I just stayed out of your way. Anyway, Scheideman didn’t even look at the chart when he called for the Haldol. He didn’t know your friend had been throwing up—”

“Like a champion,” Alex confirmed. “It’s not that the meds weren’t appreciated, just that, you know, makes it that much harder to figure out if he’d been roofed.”

“Did they run a tox screen?” He’d asked for one—had asked every doctor within shouting distance for one—but that didn’t always mean what he hoped for.

“Yeah, we ran you one—before the Haldol—and no, the doctor didn’t ask for it. We had the blood work in before ol’ Shiny Man opened his mouth.”

Dave dropped his camp for a second. “You were in our unit for months, Jackson. And we saw the marshals there for protective custody until the case got out of court. Honey, if you were there battling for Kaden, screaming for a tox screen, you knew what you were doing.”

Jackson let loose a sigh of relief and managed a smile. “You know, some people don’t believe in guardian angels anymore, but you two give me faith.”

Dave exhaled the last puff and ground his cig in the sand. “Yeah, you say that, bitch, but you never put out.” He winked and nodded to Alex. “Baby, our break’s up. I’ll cover for you if you go get the results from the car.”

Jackson gasped a little, but Dave looked at him meaningfully.

“Go,” he said, his voice dropping. “We made copies. We did the same for you, although I know you don’t remember. The minute the popo came asking for your charts, Alex and I felt a tingle in our short hairs.”

“Wait!” Jackson called, hoping for a break—or a familiar name, at least. “Do you know the name of the cop who was putting weight on Scheideman?”

Dave shrugged, but Alex nodded. “Yeah—name was Owens. Short guy, dark hair, sort of greasy. Wore a uniform. Totally fucking average—I couldn’t have picked him out of a lineup if he was sucking Scheideman’s dick.”