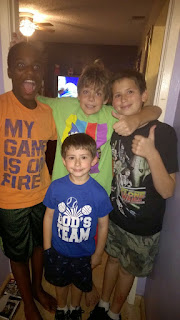 So, a year and a half ago, at ZB's 11th birthday, I took this picture, and my heart broke a little.

I love all of the little boys in that photo--the one on the left has since moved away, but I talk to his mom sometimes on FB, and I'd seen him grow, playing soccer since he was eight years old. We still see the one on the right (and his little brother, the short one ;-) and his adorable family--they, in fact, gave us our adorable little dog.

But this picture was taken in November of 2014, and the country was becoming steadily aware that old hatreds--hatreds we'd thought had been put to bed, were in fact alive and killing our young men in brutal ways.

I looked at this picture--the three spazzy boys (and yes, all of them are ADHD like whoa) and realized that whereas I saw three equals, my son and his friends, kids I loved, the police force in this country did not see the same kids I did.

They saw the one on the left as a threat.

I loved that kid. Loved his mom, loved his two twin brothers.

And our law enforcement was apparently looking at this family and seeing "scary people".

I feel so helpless, watching my country tearing itself apart like this. Baton Rouge, Falcon Heights,  Dallas--how are we still fighting this war? (I looked back to my post after Ferguson--I said the same thing. Arghh!!!)  How do people look at that picture of those awesome kids and not see four beautiful boys?

How are we still giving guns to assholes who think guns are the answer? That's cops and snipers and terrorists--all of them. The number one questionnaire on the paperwork to get a gun should be, "Do you think the gun is the answer?"

IT'S NOT THE FUCKING ANSWER, PEOPLE!!!!

Ask a school teacher who walks into her classroom unarmed, if she thinks a gun would make her job better or worse. She doesn't have a gun to enforce order--she has personal skills to de-escalate situations. She has respect for her students and a willingness to do what's best for them at the expense of her own ego. She has the knowledge that if things go south, she needs to rely on her wits and her own force of will.

I recently found out that an old colleague of mine talked a kid out of his gun in the middle of her classroom. He handed her the thing and she said, "I"m sorry. I've never touched one of these. I don't know what to do with it."

"Maybe we should just put it down."

Do you know what would have happened if a cop had been in that room?

Everybody would have fucking died, because he would have drawn another gun and there was nowhere else to go.

And I know policemen--black and white policemen, for anybody who cares. They are good men. They are kind, and good fathers. I've seen them studying for sergeants exams and restless because injuries have kept them out of the field. They've been kind to me (soccer parents are mostly kind, I've found) and funny, and have laughed at my dumb jokes and rooted for my kids on the field.

I don't want to go to their funerals. Their children must be so scared.

I know I am so afraid--for everybody.

But mostly for those boys in the picture, and their siblings, and the other children they're growing up with. Because we have let them down.

Because we're still fighting this war.