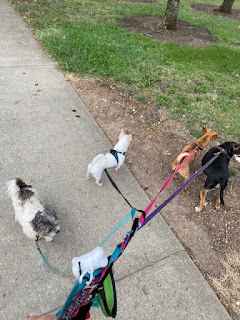 I mean I think she's fine.

But, you may remember, not too long ago I blogged about how she disappeared and I did about sixty-thousand things to get her back and lo and behold! Somebody brought her back. YAY!

So awesome. The internet works. 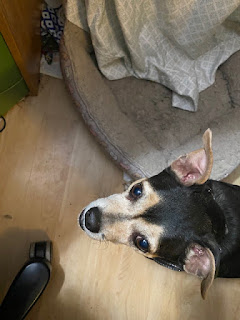 Remember when we found her, and we were like, "Oh, who would want to leave such a precious dog to wander the streets alone!"

Turns out nobody left her to wander the streets--she LEFT, and wandered the streets because she has no sense of direction and can't get home. 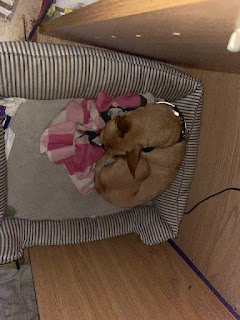 Mate has shored up the weak places in the fence four times. We're implementing new protocols, including stuffing pillows in the pet door whenever I go anywhere.

And I think--THINK mind you, that besides leaving one perfectly sized grumpy-poop in Squish's room every day--she is also systematically chewing perfectly round holes in ours and ZoomBoy's blankets.

And she loves going for walkies. Personally I think it's because she's trying to kill me, but I'll let you be the judge. 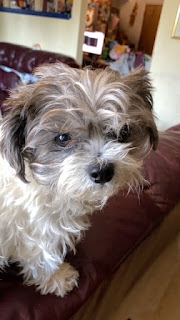 There was a moment this morning, as Mate opened the front door to greet the newest person going, "Hey, is this your dog? I saw your wife's post on FaceBook!" (Four people. FOUR PEOPLE--all different--have returned the dog!) when they were like, "How can we be sure this dog is yours? We checked the chip out--it didn't give us an address. And what's with this harness--it looks like it came from a cat?"

Mate was like, "Yeah, we don't know what's up with the chip either. It IS a cat's harness--it's all that fits. And as for the dog--"

At that moment, the dog leapt into his arms and placed her chin on his shoulder, cuddling in a way she hadn't been cuddling with the people dropping her off.

"She has no respect for personal space," he told them.

"No respect for YOUR personal space," they said.

And then he brought her inside, where she proceeded to stick her face up my nose in greeting.

Yeah. We could easily fall in love with this dog. It would be great if the little Houdini would stick around.

As for the other dogs?

As long as I feed them first, they're willing to concede she exists.

I adore them so.

I admit it--between the new dog and the Fabulous Follow event last week, I did forget to send out the all-call for Kermit Flail last week--but that's just fine, because I've got a couple of great guests anyway!

The first is the ever quirky, always adorable E.J. Russell--and I'm super excited now because she's writing paranormal suspense, which is one of my FAVORITE SUBGENRES!!! Also--can you see the title? IT'S ADORABLE!!! So yes-- E.J. Russell releasing Five Dead Herrings is cause for celebration!

In addition to E.J. we have Andrew Grey writing cowboys, and this could be the sub-genre he does best!  This month he's got the second in his newest cowboy series, Nowhere to Hide, and trust me, with Andrew, we don't want our guys hiding a thing!

And finally, we've got lil-ol-me, with Spencer, and Hidden Heart. I... well, I love this book. I mean, I love all of them, but writing during the pandemic was hard, and this book--this book reminded me of how much fun it could be. Balls-out action-packed fun. With romance built in. I had a blast writing it and I like to think it shows.

So there you go--three great releases for a busy September! Let's pray for cooler weather, lots of rain on the west coast, and some reading time, yeah? 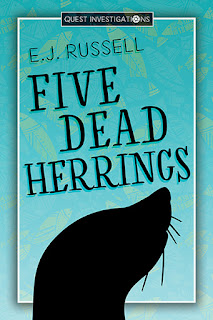 Something’s definitely fishy about this case…

On my last stakeout for Quest Investigations, I nearly got clotheslined by a grove of angry dryads. I expected my bosses to reprimand me, but instead they handed me my first solo assignment. Me! Matt Steinitz, the only human on the Quest roster!

Okay, so the mission isn’t exactly demanding. Obviously, the bosses wanted to give me something they think I can’t screw up. I’m determined to show them what I can do, however, so I dive right in with no complaints.

At first glance, it looks as simple as baiting a hook: A selkie’s almost-ex-husband is vandalizing his boat with unwanted deliveries of deceased sea life. All I have to do is document the scene, tell the ex to cease and desist, and present the bill for property damages. Boom. Mission accomplished, another Quest success, and as a bonus, I get to keep my job.

But then things get…complicated. Suspicious undercurrents muddy up my oh-so-easy case. Nothing is as clear as it should be. And the biggest complication? My inappropriate attraction to the client, who may not be as blameless as he claims.

Turns out those dead herrings aren’t the only things that stink about this situation.

Five Dead Herrings is the first in the Quest Investigations M/M paranormal mystery series, a spinoff of E.J. Russell’s Mythmatched paranormal rom-com story world. It contains no on-page sex or violence, and although there is a romantic subplot, it is not a romance.

Grab it at Amazon/Kindle Unlimited 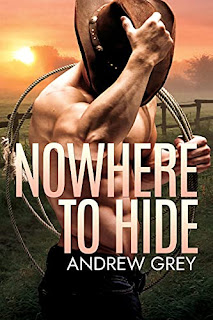 Stylish Sinclair Llewelling has little contact with his family, but he loves his cousin Lilly very much, and agrees to help her plan the elegant country wedding of her dreams. There’s just one problem: the foreman of the ranch where the wedding is to take place.

Former rodeo cowboy Dawson West takes his job very seriously, and he doesn’t appreciate anyone who gets in the way. Ranching is in his blood, and the people he works for are like family to him, so when Sinclair and his plans add to his work, he isn’t quiet about making his displeasure known.

Sinclair and Dawson have more in common than they realize, including a strong work ethic, horses, and spines of steel. Their fighting shifts to mutual respect, and heat flares as they see past each other’s walls to the men beneath. Just as Sinclair is getting a taste for ranch life, problems at his late father’s business pull him away from the cowboy who has lassoed him in. They’ll need to team back up to balance jobs, ranch, wedding, and what their hearts want. 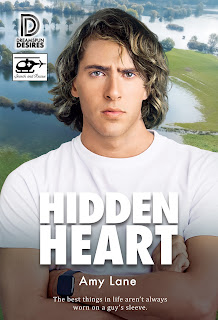 Search-and-rescue worker Spencer Helmsley has everything he needs: a job he loves, a flight partner he’d die for, and an amazing dog.Then he flings himself out of a helicopter to rescue Theo Wainscott.Stuck on a raft in the middle of a flood with the most stubborn, argumentative man in the world, Spencer soon finds himself asking not how they’ll survive but what’ll kill them first—the water, each other… or the sexual tension.While Theo and Spencer are trying to beat the odds, Theo is also trying to beat some sense into his rescuer. Spencer seems to have no regard for his own safety, and that’s a problem for Theo. Maybe he’s never seen another gay man in the wild, but it doesn’t take him long to recognize that he’d like to get to know this one better.If they make it out alive, Theo will have his work cut out for him convincing Spencer to risk his heart instead of his life….

What was I doing again?

Yesterday, ZoomBoy and I were on our way out of the house to go pick up Squish and we think that's when it happened. Because when we got back to the house, New Dog--a.k.a. Ginger, was missing.

I went into action. Posters, OUT. Canvassing the neighborhood, DONE! Posting on appropriate websites, CHECK!

Me falling exhaustedly into bed for a very short and belated nap before fixing dinner-- GAH. Too. Tired. For words.

And later that night there was a knock on our door. Somebody (they'd posted on the websites but by then I was napping or fixing dinner) returned our New Dog to us, just in time for her vet's appointment to be scanned for a microchip.

That was today. Brought the dog in to have her scanned and checked out--and to get a pedicure. There was a microchip. As God is my witness, nobody at the vet's office knew what to do with that. Took me 45 minutes to find out. (It's currently posted at all the local shelters--someone looking there will be given our contact information.) Anyway, ACK! Forever. Finally, left the dog there, went home and got the OTHER two dogs and took them for a walk.

It was a lovely day. I thought, "Okay, getting errands done, time to go to Oilstop for a 30 minute oil change and to get the tire pressure checked." Yes, there were gauges going off--I don't do this out of the blue.

Anyway, 30 minutes--with the dogs, mind you--turned into TWO HOURS. My blood sugar dropped. I had to pee. And I was trapped in the car. (Thank God it was a nice day with a breeze.) I had water for the dogs, and they'd just peed. Mostly, they slept and I read (no knitting!) But two hours!

Finally--FINALLY--we get out of there and I HAVE to go get food because I can feel the loopy/crying blood pressure thing going on. And then it's time to get New Dog back from the vets. So the fourof us are going through Bannfield to get a new halter (since she's wearing the cat's, at present) and I pause to see if I have everything I need, and the dogs...well, they weave the Gordian Knot between my knees with their leashes. It was incredible. I've never SEEN such dedicated entanglement. And there I was, unweaving three leashes and paraphernalia from around my ankles and under my feet, when a Little Old White Lady shows up with an opinion.

"Your dog stepped on her leash," says LOWL.

"I see that," I say, barely managing to stay upright.

"It's under her feet," she says, pointing at new dog, who is, at most, 10 inches tall, including her ears, and on four feet--only one of those feet, btw, is over the leash, which is on the ground.

"Yeah, I know." At this point I am untying a three-way knot involving poop-bag dispensers, hand sanitizer, and a portable water dish.

"Sure, lady, the dog's the one we have to worry about," I say, going in, under, around and through, like a Hippopotamus doing the laser beam scene from Entrapment.

Anyway, she huffs off for some reason, I have no idea why.

So, by the time I get home... well, I'm done. I'm exhausted, I haven't showered yet, my blood sugar's doing a roller coaster, and I haven't done a lick of work in two days. Mate makes sure I shower before assuring me he can pick Squish up from their friend's house after school, and I slink off to bed wondering if I overreacted.

Ginger didn't seem to think so. She cuddled up under my chin as though she was never in danger of tripping and falling that dreadful 8 inches to the tile.