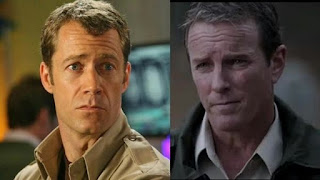 P.S.-- I'm calling this fandom John/Jack.  Since nobody else seems to have thought about it or named it, I'm going to claim that in the name of Amy Lane!

For those of you who didn't tune in LAST Friday, this is John Carter from Eureka and John Stilinski from Teen Wolf with a side of Sterek!  Enjoy :-)

That part where Stiles resolved never to think about what his father did with Jack Carter was a total lie by the way.

After breakfast, during which Jack offered Stiles a career on a plate--and one nearby, so that he wouldn't have to move away from Derek, because sex with Derek was getting to be a staple of his existence-- Stiles and Derek spent a lazy Sunday morning in the living room, reading each other funny memes from the internet.

During a lull in the conversation, Stiles decided to broach the subject.

"Ask who what?"  Derek was making lazy circles with his big toe on Stiles's ass through his sweats. Stiles wiggled, hoping his Dad and Jack would be gone long enough for them to have Sunday day sex, which was probably as awesome as Saturday night sex.

"Ask my dad."  Duh. Derek couldn't possibly tell him that he didn't think about it too!

"Ask your dad what?"

Stiles rolled over and looked at him, because it was obvious he was just being dense.

Derek got up and left the room.

The conversation had not changed as John had driven them from the bar.  They bantered, they talked about their jobs in law enforcement, they told their funniest/weirdest cases, and even, when the silences between them grew ruminative, their wives.

But John pulled the car up next to his son's battered jeep in the driveway--and next to Derek's sports car--and killed the engine. The silence between them fell thick and heavy.  John stared straight ahead and felt the heat radiating from Jack's body.

He thinks we're going to have sex.

In his mind's eye he saw that homely/handsome face, and his heart and stomach clenched. Would it be hard to touch that face? To feel that mouth on his? Would he reject this man who would be nothing but kind to him, out of a moment of old inhibitions that he'd never believed were valid anyway?

The thought of Jack Carter hurt, faking it like he had in the bar--that made John ache in a whole different way.

He turned to look at Carter and saw the other man studying him in the light.

His logical Sheriff's brain kicked in.

Lips: soft as a woman's.

Texture: Stubble rough against my jaw and cheeks.

Neck beneath my hands: Skin a little tougher, but still sensitive.

Jack took over the kiss.

John found himself shoved back against the car seat with Jack's broad chest covering his, Jack's big, rough hands holding his biceps under his sports jacket.

HIs mouth on John's demanded a blunt, no-bullshit return for the solid domination of cheeks, lips, and tongue.

John returned it, stroking Jack's cheeks with his thumbs and keeping his eyes closed against the alien thought of a man doing this to him.

Although he wasn't kidding himself at all-- Jack Carter tasted like all man.

Jack pulled away from him and John opened his eyes, gasping in surprise.  Jack's hands cupped his cheeks, and his blue eyes--colorless under John's flickering self-installed street light--bored into John's.

"How you feeling?" he asked soberly. "Do you think you can do it aga--"

John kissed him again, this time dominating, pushing Jack back against his seat rest, and upping the game. The texture fascinated him. What would Jack's stomach feel like under his shirt? The skin was silky against John's palms, the muscles hard and compact. The hair was silky too, and his pecs were hard and heavy.  Oooh… solid muscles, John loved that. He kneaded them, warming his fingers against that silky skin, and then, oh, wait, there they were, against his palms, against his fingertips…

Tiny, pointed nipples. He rubbed circles with them as he continued to drive his tongue into Jack's mouth, and then, as they grew erect under his fingers, he pinched them both.

Jack groaned, and John felt strong fingers grasping the short hair at his crown and tugging.

"I was trying to go slow!" he gritted.

John paused, saw the toughness, the vulnerability, the basic decency of this plainly pretty man. He pulled Jack's hand from his shoulder and kissed the knuckles, letting his tongue trace the scars that had come from a life lived between civility and violence, between law and insanity.

Jack had let go of his hair and had started squeezing his cock through his pants--he was as hard as he could ever remember being, harder than he'd ever thought to be again after his wife died.

"You need to tell me if I need to be gentle," Jack cautioned.

John traced his lower lip with a thumb. "I will take whatever you think I need," he said, closing his eyes and ceding his body and his pleasure to this other human--at least for this night.

Jack nodded, and he sealed the bargain with short, chaste kiss.  "Not in the car," he said, grimacing. "Aren't we a little--"

They both separated and got out of the car, as efficient and utilitarian in their movements as they both were probably in their day to day lives.  John led the way to the side door, pausing before he unlocked it.  "You know, I really liked the kissing part," he said frankly. "Does the rest of it live up to that?"

Jack cupped one cheek and pulled him into another one.

"One way to find out."  He pulled up a corner of his mouth and John rubbed it with his dumb.

"Looking forward to it."

John preceded him through the door.

Derek leaned forward, mindless of the mess, of his own full to bursting cock, throbbing for release in Stiles's ass.  His kiss was slow, languorous, and soulful.

When he pulled away, Stiles's eyes were still closed, and Derek's orgasm pulsed upward, from this thighs, stomach, and groin.  His erection, hard and clenched tightly, beat in time to his thundering heart as he groaned and fell forward.

Oh God, even a slow, lazy fuck, brought him to his knees.

He collapsed against Stiles, panting, hips still twitching as the climax vibrated out through his cock.

For a moment, there was nothing in the room but their hearts beating in time.

"Stiles," he said after a moment, careful because this was something they hadn't said before.

He felt Stiles smile against his stubbled cheek. "Yeah, Sourwolf. Love you too."

He pulled back and looked deeply into those playful, bitter gray eyes, hoping Stiles would see what he was trying to say.

"Yeah--I really love you too. What's up?"  Sudden panic almost flailed the both off the bed.  "You're not breaking up with me, are you?"

"No," Derek said decisively. "But we're not officially boyfriends, and not 'hooking up' like you told Scott the other day, so know that."

"You're not jumping the gun. I love you, this is real, and you need to know that."

"Why do I need to know right now?"

Derek swallowed and touched foreheads with his beloved.  "Because. Stiles, I'm not asking your father who tops when he's with his new boyfriend."

Stiles smiled under his lips. "Yes you are."

Stiles kissed him, hard, and not playfully at all.  Derek, who had thought he was replete and done with sex for the day, began to get hard while still in Stiles's body.

"Yes," Stiles murmured, and Derek groaned and kissed him silent.

And tried really hard not to think about what he was going to have to do after Stiles fucked him into submission.

Okay folks-- We'll see what John and Jack actually did in the bedroom NEXT week!
Posted by Amy Lane at 1:32 AM