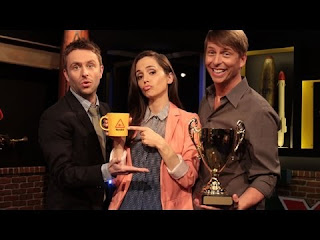 *  The @midnight episode with Jack McBrayer was the best thing about my day. Saying. Surprising minx that he was, I very much enjoyed watching the other players and Chris Hardwick tease him into relaxing and kicking ass on the show. Favorite moment?

Chris Hardwick was just about to tell him that because it was his first time on the show, the fact that Jack was in last place still wasn't getting him kicked off of the final round.

To which Jack responded, "Please let me leave!"

I died laughing. Particularly because THAT'S how I felt about this entire fucking day.

*  First of all, I've done some math this year. ZB is going to a different school than Squish, and while Mate drops him off in the morning, I pick him and Squish up in the afternoons. I am losing between 30 and 45 minutes out of my day because of this. And because of a change in the soccer/dance schedule, I went from two nights a week doing extracurricular activities to three, plus some extras on the side (Squish wants in the GATE program, which means I pick ZB up at 2:30 and Squish up at 4:30 and THEN we all ride together to dance lessons!)  All told, I lost between 5-7 hours of time a week which I used previously to work. Given that the rest of my day is a little more fractured, It's like trying to do 40 hours worth of work in 32, and I'm scrambling. So, if I'm late with e-mails, or absent on social media (although I seem to bitch more when I'm stressed because I can't concentrate, so that's not a good measurement) or if you sent me an interview that I thought I could do or asked me a question that I was SURE I could get to--

I can't. I just flat out can't. And it's driving me crazy. I worked so hard to be reliable and I've been a fucking twatwhacking mess since… June, mostly, but I thought it would get better when things settled down. Turned out, things are settling down with 7 less hours and I don't know what to do to get them back.

*  And we started out this Monday with poop in the hallway. And under Squish's bunk. And pretty much in piles everywhere. Squish was late to school because: poop.

*  And I got to aqua and it turns out that the aqua classes that have been keeping me alive and mobile have all been canceled. Seriously-- I was M/W/F like clockwork, and the only ones they have left are T/Th. Which will teach me to bitch about the instructors btw-- I should have known that was coming.

*  Got home and worked past my nap time.  I napped for about 45 minutes and  when it was time to go get ZB and then Squish, I… well, I had my head up my ass, or down the editing rabbit hole or… whatever. I went to Squish's school first, which meant I was 20 minutes late picking up Zoomboy and then 5 minutes late when I came back and got Squish.  They were fine--but *headdesk*-- there goes mother of the year…

*  Got back and worked past the postage time.  The good news is, I've submitted the damned book, and I can pull my head out of my ass for at least a couple of days. And since I've got a dentist appointment tomorrow (grrrrr….)  I should be able to get to the post office!

*  The bad news is that I've been holding back the raging waters with my finger in the dike while I've been frantically finishing this project with my other hand. I am SO FAR BEHIND. I can't even write another list, because it will just make me cry.

*  Whatever it was I wanted to make for dinner got subverted for my need for comfort carbs and dudes… I don't want to talk about dinner. It was tasty and horrid.  Ulg.

This is sort of a pathetic whine about MOnday.  I mean, Chicken worked sick, and had to deal with $200 repair on her car-- that was a worse Monday. Mate has had soccer meetings for the last month of Mondays-- that would put a damper on ANY day of the week.

And when I posted a whine on Twitter/FB, the general response I got was, "It HAS been a cruel and unusual Monday, hasn't it?"

So I'm going to be interactive if I can-- what basically miserable stupid shitty thing happened to make your Monday less than ideal?  No tragedies-- I mean… dudes. If somebody passed away, that's not a Monday thing, that's a big painful deal. No-- this is, you know, dogs pooping, cars breaking down, checks not making it on time, the traffic light that lasted 45 minutes with the kids screaming in the back… share your Monday story, because right now, my whine is pretty pathetic, made painful mostly because I had my head up the dragon cave and wasn't functioning on all 8 cylinders.

I'm so glad you asked! My TJM went into overdrive on Thursday along with muscles in my neck, so I've been in agony for days, though it's getting better. Well enough that I could do some work today. And what work did I do, you ask? I spent 6 hours on the phone with Century Link to discover, 10 separate people and visits to every department at least twice and more "Jazzy" hold music and "special offers" than anyone should ever be forced to listen to, that "it's the best you can possibly get and there are no improvements possible." And I now know more about how the interwebs works than I can ever even use for a book. THEN, I received an email from...Century Link...sharing that my changed email was going into effect. What the literal fuck? So, I get onto the online chat help. For the next 2 hours and 3 people. I was screaming in all caps by the time I got a supervisor and it still took over an hour to get things semi-straightened out. Inquiries are being made as to who out of the 10 people I talked to chose to change my email address (apparently they wanted my name spelled Ginei because obviously) without my permission or knowledge. Oh, and did I mention that I'm as late as you on all my deadlines? So, um, yeah. 8 full hours spent with our phone and internet provider to...change nothing OTHER than the email address BACK to what it was before someone else chose to change it. And SHOCKINGLY it made me tense so guess what's hurting again? Yeah.

But one of my BFFs wins. She has both parents in different hospitals tonight. So, she's winning the Sucky Monday Competition we all wish we weren't having.

{HUGS} to you, babe. You made me feel like it's just the moon and the day out to get us all, and if they're after all of us, well, we can just fight back together, can't we?

Being bombarded by emails and drive by's from a supplier who wants to get paid ASAP, when the girl who knows all about this stuff is out on vacation until Tues. Trying to call our AP department to figure it out, having the phone ring once, then dead air, then hang up - for hours. Driving home from work, only to have it take twice as long because of all the Milwaukee people heading to Green Bay for the Monday night game (at least they won!). My freeway exit being closed all week. Craving Costco lasagna, stopping to get it, and then finding out it has to bake for two hours (I was starving, but it was worth the wait!). Thank god it's Tuesday.