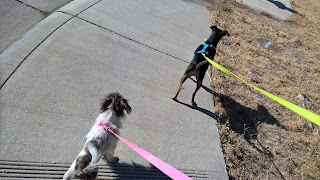 So, I sent this picture to Chicken, who has been calling the dogs "assholes" since they chased her cat away.

And yes, she was correct. That IS two assholes straining.  (I carry a little cylinder full of plastic bags for no other reason than to pick up poop. Yes, I find this hilarious.)

Chicken and I also came to the conclusion that one benignly drunken male feminist is worth ten sober chauvinist pigs on any day.

Unfortunately, that ratio is true.

Yesterday, Mate was looking at the ziplock bags full of dog treats I buy and laughing. "I don't know why! I keep thinking they're human treats! And that plastic bin full of dog biscuits is the same thing!"

We both had a good laugh about it, and today I went grocery shopping.

I came home today with three ziplock bags of jerky-- the kind for humans-- and one of those clear plastic bins of animal crackers--mostly just to dick with him. I lined them up on the counter with the dog jerky and biscuits and let Mate come in and see them.

Heh heh heh… I'm usually the worst practical joker in the world-- I loathe the practical joke. But this one? This one made Mate laugh. I was happy.

So, Kim Davis got to go to jail today. For those of you unfamiliar with Ms. Davis, she's the Kentucky clerk who refused to grant marriage licenses to gay couples because of her own religion. She's an elected official, and she was refusing to do her duty and refusing to step down and let someone else do it, so, yah, jail.

I am obviously not feeling sorry for her.

I am particularly not sorry that her past life as an adulterer has come to light.

Because here's the thing-- there are a lot of religions that would stone this woman to death for that. She should be thanking her lucky stars that she lives in a place that believes in the division of church and state.  But it does all go back to what I said earlier-- people always tend to think that "division of church and state" means that their state will support their church.

I know a teeny tiny bit about history, and I'm reasonably sure the founding fathers did not mean it that way. What they meant was that their president couldn't also be the leader of the church that compelled attendance and tithes from all of the citizens, and the reason we know this is because that's what the monarch back in England was doing.

This was bad.  They thought we shouldn't do that.

This did not mean that we could use our religion as a club to bang people on the head with, and it did not mean that anyone who didn't practice our religion was violating anything to do with the state.  Yes, I know--given our foreign policies in the middle east and the right wing's domestic policies governing women's health and their bodies, people probably got confused.  It is obvious that this woman, too, was confused, much as I was when I read that she got pregnant by her third husband while married to her first, and that the second was okay with this but the fourth one didn't come around until she found God.

It probably wasn't that hard to find God.

He was probably eating popcorn while watching her do bizarre kinky things to her life.

Right now, he's probably full of popcorn, drinking a root beer, and talking to his son, full of wonder for the entire human race.  "And can you believe it, 'Sus? This crazy heifer was using our names to justify this shit!"

"Just laugh at all the bigots not going to heaven, son."

"Yeah-- and aren't they going to be surprised when Mom tells them that.  Man, they are just going to shit their shorts when they realize who's really in charge."

"Oooh! Yeah! That's gonna be fabulous. Can I cook up some more popcorn so we can watch the show?"

"Yup-- here, hold the giant Jiffy Pop pan over California. I've got to say, global warming isn't good for the poor folks down there, but it sure does make it easier to get snacks!"

Okay-- you get the picture. And I must be more tired than I thought, because A. I ventured into politics again, and B. I just had an imaginary conversation with God and Son in front of witnesses.

I'll leave it on that note, before some clerk in Kentucky decides this blog is illegal.