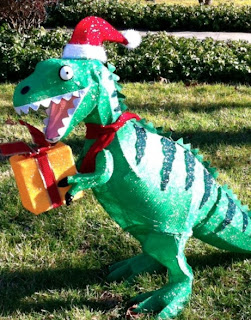 Mate and I got a lot of Christmas shopping done last night--I'm very impressed with us. If there was a fold in the space/time continuum and BAM! we wake up and Christmas is tomorrow, give us some tape, some scissors, some paper, and we can make due.  I need to write the Christmas letter-- my other task today-- and at some point in time baking would be great!  But we're on our way to a Merry Christmas, and that terrible mental checklist that starts an ever-present cycle in my head starting the day after Thanksgiving is on its way to being satisfied.

Mate and I are both terribly aware that things can still go wrong.

A lot is made of a baby's first Christmas, and Mate and I are no exceptions to the "ALL OF CHRISTMAS MUST BE PERFECT!" drive-- but then, Mate and I have had our share of screw-ups in the St. Nick department, too.

*  Well, there was the time we got the Christmas cards out a wee bit late…

*  There was the time (undocumented) when all we got for Big T was clothes.  (He didn't ask for anything else that year.) 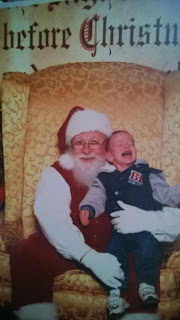 *  There was the time (also undocumented) when his pile was mysteriously smaller than everyone else's.  (This started the process of sorting their piles at least three days before Christmas, because there is NO rectifying this one at 12 a.m. Christmas Eve.)

*  There was the time (probably documented but it was just so sad…) when he stayed up all night and made himself crazy with how awesome Christmas was going to be, so that when he ended up getting exactly what he wanted, he burst into tears.  (Big T is a delicate duck around Christmas time.  He's mellowed out and become like a young Kris Kringle since, but his generous heart has always been overfull.)

*  There was Zoomboy's visit to Santa wherein this photograph was taken:

*  There was the Christmas (mentioned in Country Mouse) wherein Mate and I were so devoid of funds that after buying everyone else's Christmas gifts,  I bought four Harlequin Temptation romances at the grocery store and wrapped them so that the kids wouldn't think that Santa left me high and dry.

*  There was the Christmas Big T woke up at three in the morning and got really upset when we told him hell no since we'd just gotten to bed an hour before he woke us up.  (We were not exactly charitable about this.  Damn, for a kid who's birthday is the 12th of December this kid has had the worst luck with Christmas!)

*  There was the time Santa got the kids cell phones and Mate waited until he thought they were awake so he could call them and the packages would just ring under the Christmas tree.  (This was the year after the one where T woke up at 3 a.m..)  Unfortunately, we may have been up at six a.m., giddy with excitement over the big ticket Christmas gift, but they had entered adolescence with a vengeance and they slept in until eight.  At any rate, he'd set the phones on buzz, so after twenty minutes of kids going "What was that?" they finally found the damned packages at the bottom of the pile.

*  There were the many times mom stayed up until gawdawful a.m. knitting kids' or family's Christmas presents, absolutely sure that CHRISTMAS WOULD BE RUINED if the doll/hat/mittens/scarf were not done absolutely in time for the blessed event.  Of course the best one was after I got the third season of SPN and spent three nights running watching Sam and Dean through three seasons of hell. (I have mellowed out a little since then, mostly because I was tired of being tearful and distraught on Christmas morning-- but that doesn't mean I still don't lose some sleep around Christmas.)

*  And then-- my personal favorite in Christmas loserdom-- there was the time Santa forgot presents small enough to fit in the stocking and ended up at 7/11 at eleven o'clock Christmas Eve.  There were only two kids at this point, but they were just old enough to go, "Geez, mom, the stockings sort of sucked this year.  Since when did Santa wrap stale Gummi worms?"

Yeah.  We put a lot of pressure on ourselves for Christmas, don't we?

But (and I can only say this because I have at least minimal Christmas going on in my closet at this point-- I wouldn't be nearly this sanguine if I still hadn't gone shopping) the really impressive thing about all of these failures is that, so far, the kids still love Christmas time.  Even the big ones.  There are still specials to watch and lights to cruise and stockings to hang.  There are still cookies to bake and fudge to rock out and knitting to do (in a timely, relaxed manner, of course.)  Christmas doesn't mean spazzy, freaky parents sobbing in failure to them.  Mostly, Christmas means pretty lights, cuddling in front of the television, and being together.  So I guess the moral of my story is that Christmas (like personalities) can often be a series of successful gestures.  As a kid, I remember some really thin Christmases-- I remember when my dad assembled a bicycle out of spare parts found at the dump.  He cleaned it up, spray painted it, and bought a new seat.  I was seven-- I thought it was beautiful.  Once he made my little step-sister a puppet using foam balls and fuzzy pipe cleaners that he bought for pennies on the dollar, and the duck puppet he made my step-brother out of wood.  I remember the Christmas he didn't get his check until Christmas Eve, and he took me to the electronic toy department in Sears and we all got electronics and not much else.

I remember many, many projects my stepmom made-- hand sewn sweaters, brand new jeans, missed presents under the tree.  I remember the one time my stepmom opened Alexa's present (and didn't realize it.)  My dad took me to a drug store on Christmas day, and Alexa ended up with a coffee cup so my stepmom wouldn't be hurt-- she really loved the rose perfume. 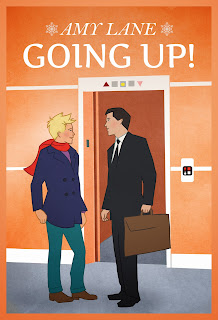 So yes-- it's weird.  I remember all of the Christmas failures--but, like my kids, all of my memories are good.  The moments may not have been perfect, but the intention behind them (unlike other times of the year) seems to have transcended the painful blunder.

The silly season is upon us.  The craziness has begun, and for many of us, work etc. has screeched to a halt while we try to carefully construct the illusion of one perfect time of the year.  I guess it's just important to remember that even if the perfection fails, the sweetness--that can still remain. 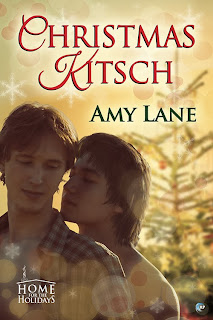 Just a reminder-- Going Up! is available for pre-sale, and it is available on Christmas day.  Think of it as the literary equivalent of hot chocolate-- sweet, warm, and better with marshmallows.

And don't forget-- the Christmas Kitsch Scavenger Hunt is open until the 21st!

I have my share of those kind of Christmases, too, and I also remember them with a smile. They are all recorded in the Christmas book that we keep each year. It helps me remember the important bits-that we were all together and had a good time. (the year we all had the flu stands out in my memory).

Oh, now you have me remembering Christmasses past. The one right after I left my first husband when I took care of myself in my little apartment just the way I wanted to be taken care of, cooked my favorite meal, listened to my favorite music, sat in the light of the Christmas tree and relished being my own woman again.

The first year I made Kyle a quilt and his heart shown through his eyes.

The quiet, intimate Christmas eves we have shared - just us and the cats.

No big family todos? We don't care for them for some reason.

Well, growing up with alcoholics, I remember the year when Mom was too drunk to eat, my twin brother left in a drunken rage, my oldest brother didn't know how he got home, my middle brother didn't get home till the next afternoon, and my dad, when woken and encouraged to go to bed, didn't know he was home but said, "Oh god, my wife will kill me. I've got to get home." Come on - if you saw it on TV, you'd laugh.