So, you all know the deal, right?  Vacation isn't really vacation-- sometimes it's just personal work instead of professional work.  A reason to visit relatives you rarely visit, an excuse to sit on the couch and bond with offspring-- and with friends visiting-- and a moment to seduce animals to your side of the world by being their so called "petting buddy" which really means emotional manipulation of the basest sort.

You guys get it-- vacation! 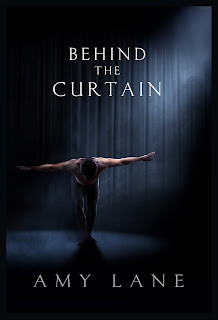 And, fact is, I'm regrouping and recharging, because I apparently need it in the worst way.  My plantar's fasciatis is rearing it's ugly head, and, well, Behind the Curtain is out in eight days.  I still need to post holiday fudge and Rusty swag for sweet hell's sake-- so, yeah.  Not a lot of tweeting, not much FB, and a lot of me sitting on the couch and knitting while I gather my wherewithal or, you know-- get my shit together so I can get my shit together.  I was honored to be able to knit with the adorable and amazing Miss Julianne Bentley, who took me around the yarn store in a whole new hilarious way.  I love talking to people who knit and laugh and get my jokes.  Makes me so happy-- and did I mention the adorability?  It was a really good day. 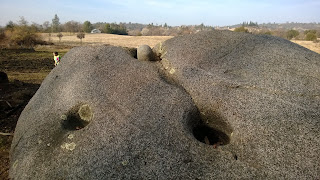 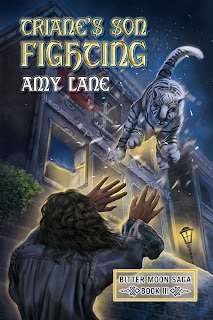 Today we visited Mate's mom, who is still living on her mother's property.  Today, I heard the total history of this stone.  Now, I've always loved the stone-- it's an Indian grinding rock, on which the Native Americans used to grind blanched acorns into flour.  A rock like this would have been passed to generations-- that's how the holes got so big and the pestle rock so perfectly rock shaped.  Anyway, this rock didn't always sit in the middle of a cow field.  It used to sit in the big irrigation pond-- but the government had people relocating their irrigation ponds, and when they drained the first one dry, well, they found this and had it moved somewhere it wouldn't get covered with water, because, well, uber cool, right?  The rock had been on the property since Mate's family bought it from people who were originally deeded the acreage in the homestead acts.  Mate's family came over from Iowa in 1862 and worked for nine years.  They were able to buy it in 1871.  I sort of love that story-- although they're sort of a doughty, tough people, not particularly Celtic in soul, there is something hearty about them, insistent, and embodies some of the best of what Mate is-- dependable and real and honest.

So there you go.  Grinding rock.  All sorts of metaphors you can get from that.

Anyway-- time is, of course, surging by like tide.  I am also editing Triane's Son Fighting, which will be out by the end of the month. 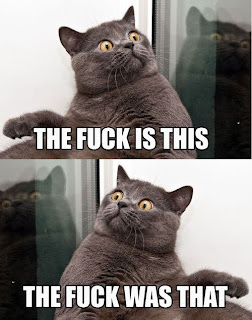 I am actually sort of excited about this story coming out this month-- I'll be able to take three of the four stories to Coastal Magic with me in early February, and that's going to make me very very very proud!  By the way, folks-- there is still lots of room for readers at Costal Magic-- by all means get your passes now, because I'd love to see you there!

You see that cat?  That's me, asking where the time went! 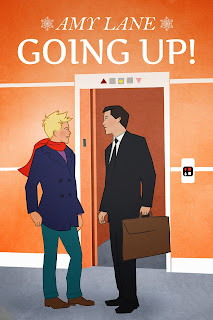 Seriously-- holidays used to seem like they lasted forever-- do you remember that?  But not right now.  Now they fly right by, faster than my children's birthdays.  So, if you catch me laying low a little, not quite twittering or Facebooking as much as I am wont to do, it's because I'm savoring my holiday-- and my children.  Tonight we watched Stardust.  So much awesome-- not the least of it being that Zoomboy and Squish were absolutely captivated.  It was a very, "I raised them right!" moment.

Anyway-- don't forget that Going Up is on sale at Amazon, , ARe, and Dreamspinner Press, and it seems to be helping a lot of people wrap up their holidays on a good note.  That makes me happy :-)

Enjoy your New Years all!

Wait - it's January already? Damn it, everything lasted longer when I was a kid. It's these cheesy new minutes they're using these days. And candy bars - remember when they filled the whole wrapper instead of rattling around loose? Swear to dog, my grandmother was right. Things WERE better in the old days!