Dance of the Sugar Crazed Parents 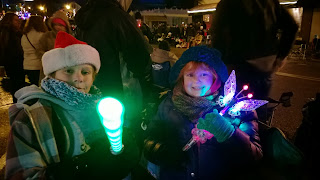 We're not that delicate.  But, well, we are sort of running around, attracted by the lights.  This weekend was a busy one, with a visit to the Auburn Light Parade where the temperatures ran around thirty degrees F.

You read that right.

Here, in this part of California, that there is some cold weather.  I mean, I'm sure folks from Manitoba or Newfoundland would be, "Ooh!  Where's our T-shirts and boarder shorts!" but here?  We were so not prepared to be standing in the cold for an hour and a half, even though we tried very very hard to fake it. 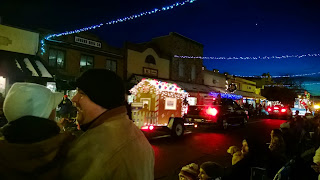 The worst part was that Zoomboy got his gloves wet in about .2 seconds after we arrived, so, what started out as four pairs of warm hands turned into two pairs of warm hands (Zoomboy and Squish, both wearing mine and Mate's gloves) and two pairs of freezing hands (me and Mate, both of us wearing the fingerless mitts we'd brought to go OVER the mittens that the kids had on.)

I was having flashback to the baseball game in Chicago, and not just because those were the mittens that Zoomboy had stolen AND THEN gotten wet! 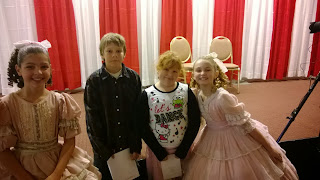 But the parade was gorgeous-- it's a local thing, and there were over 113 entries, everything from a Christmas lit mini-VW bus to giant dogs with lights in their collars.  Everything was lit--even the bands, one of which had lit red noses.  (We were wondering if they were going to get dizzy with that thing over their nose, but no one passed out in front of US.) 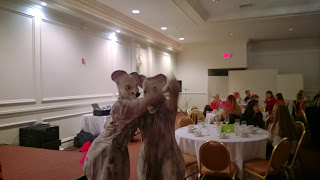 So it was an awesome--if chilly-- time.  And we were reminded that, although fairly fearless and bigger every day, our kids are still seven and ten.  Squish started to cry at the end, over something silly (didn't see enough snow) and after twenty minutes in the heated car, and some chocolate from McDonalds, she said, "I feel better now, Mom!"

Gotta remember-- the little ones get cranky when they're cold, and, yes, they're still little. 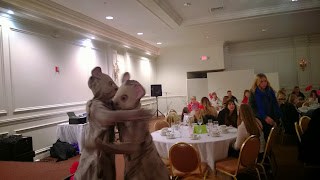 And one of the best reminders of this was the Nutcracker Suite! 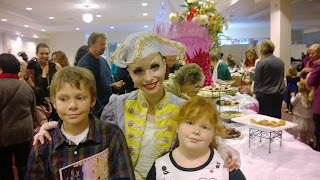 Wow.  I was pretty sure they'd love it, but I was unprepared for how excited they got at the tea, which happened afterwards.  All of the dancers were there, in costumes, and the kids were given little "autograph books" to go get signed.  Our kids wanted to collect every dancer, and I think they damned near did!  Being served at the tea were cucumber sandwiches, curried chicken croissants, and petit fours!  Nom.  So tasty.  And so much fun!  The mice capered throughout the entire thing, and just as we were leaving, they incited a riot by running playfully from a knot of screaming children.  (Yes, I swear they were playing-- they hid behind the Rat King, and there was much laughing.) 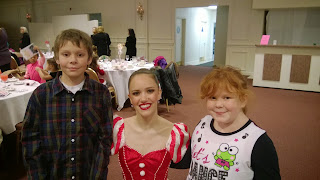 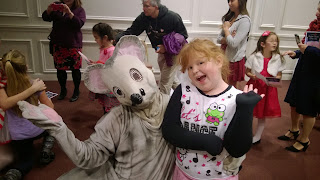 Anyway-- our kids got as many pictures taken as possible, and the dancers were lovely.  They smiled and chatted, everyone from the lowliest sugar plum fairy to the Nutcracker Prince himself thrilled and sweet to the children who loved them.  At first I was worried about Squish's ensemble-- last year's frilly dress was a tad small and a lot well loved.  In fact, it had been loved to death, and so I put her "I love dance" T-shirt over her leotard and tutu.  The dancers adored her, even her old ballet slippers, which went so much better than her tennis shoes.  In being her perfectly Squishy self, she charmed everyone else with her Squishiness, and that was lovely.

But when we got home last night?

I mean, all weekend was Christmas, and we didn't even decorate the house!  I am amazed. 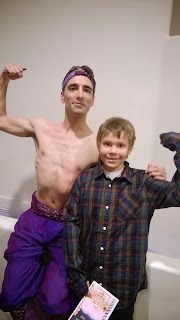 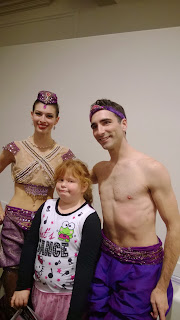 That's okay though-- we'll save the house for when Chicken gets home on Thursday night!

I'm going to leave the pictures to be scattered throughout the rest of the post, but, well, you'll see.  Like I said, the dancers were lovely, even the young soldiers and the two Claras.  I was really proud of our city's ballet-- and a little embarrassed that I had to reach all the way to Los Angeles for Jared, my ballet diva from Behind the Curtain, but then and again, Jared has his moment dancing with children too, and I think he does these guys proud.

Anyway, in other news, Steve saw the vet this weekend too, and the funny part? 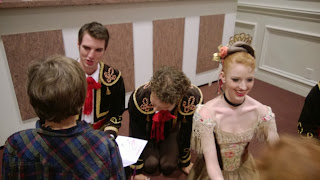 Well, the vet made a point to call me up and tell me my cat was a cheap drunk. 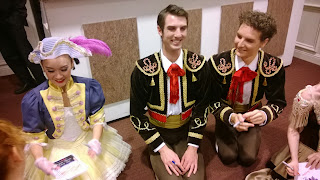 Yup-- as soon as she got a hit of anesthetic, apparently the little hussy was hand-humping every tech in the place like a regular Pussy Go-whore!  The thought totally cracked me up, but what was even funnier was when we got her home.  We'd been firmly admonished to monitor her food intake and make sure she didn't eat "too much" and since she was still doing the sloe-gin lurch down the hallway and her food was up on the table, we figured no problem.

The problem was keeping her from wiping out every item on the table in her attempt to just pig out.  Mate watched fighting Big T in her effort to get to the food and started cracking up.

"She's not drunk, she's stoned.  That is one killer case of the munchies right there!" 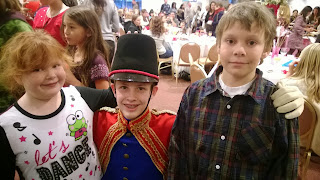 The cat was too busy stuffing her maw to comment, but I think Mate was dead-on right! 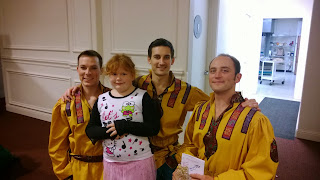 Anyway-- for those tuning in for Christmas Kitsch news, the four stops on the blog tour are as follows:

A Place to Park-- post and chance to win are here at Sid Love's.

Firsts-- post and chance to win are both here at Sinfully Sexy.

A stoplight stop is here at Scattered Thoughts and Rogue Words.

And another stoplight stop is right here at Dawn's Book Nook. 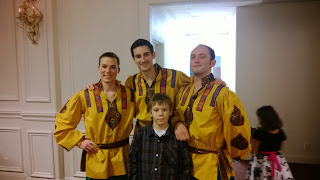 Now December Rain said she had trouble finding the place to collect the phrase-- the problem, I think, is that it's at the VERY bottom.  After the rafflecopter in some cases!  What you're looking for is the copy that describes the contest, and the sentence below it:

So, for example, say you're on Sinfully Sexy-- it's gonna look like this: 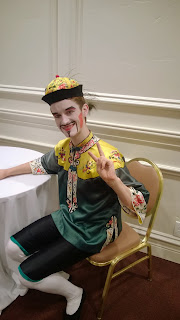 In addition to the Riptide giveaway, I'm having a scavenger hunt on my own blog.  At the beginning of the blog tour, I'll publish the tour dates on Yarning to Write.   For every stop on the tour I'll have a "phrase" for the scavenger hunt.  At the end of the tour, I'll put up a post for the people who have found the phrases.  If you comment -- and then send me an e-mail with six of the twelve phrases and your address!-- I'll send you some Christmas Kitsch swag.  The post collecting the winners will go up on the 13th (the day of the last stop on the tour) and you will have a week to go read all of the tour stops and collect your phrases.  The hunt closes on December 21st, at the end of the day and I'll get your swag into the mail between Christmas and New Years!  (Hopefully after I get my own Christmas cards out in the mail.  I'm not known for my punctuality, I'm afraid;-)  Look below for today's phrase!

And don’t forget to collect Amy’s Third Kiss for the scavenger hunt on Amy’s blog on December 14th! 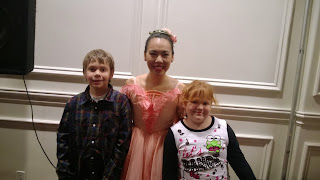 And there you go.  "Amy's Third Kiss" is the item that goes on the scavenger hunt!

I hope that clears things up, cause I REALLY want to give away key chains and bookmarks!

Anyway, thanks all for listening-- and I'll try to go just a little bit slower on the old holiday bustle.  Man, this weekend wore me out! 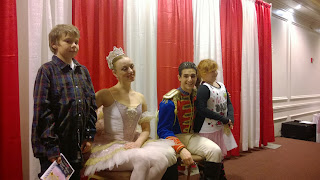 You have quite probably the cutest kids on the planet. I don't even think my own is that darn cute. *shakes head*
Love that they had such a wonderful time!

Oh, what a wonderful time that ballet was! Wish I could have joined you at the tea.

Success on your book promos! Hugs and joy for the holidays. And stay warm!