Okay--it's not a word. It should be. "Christmasing" should encompass everything from baking to visiting people you usually call and calling people you usually e-mail, and shopping and wrapping and getting all dewey-eyed with your spouse, and having the folks take the kids so you can shop AND wrap AND get all dewey-eyed AND plan all at the same time.

Cause that's what I've been doing. I've been Christmassing. (One 's' or two? If you're going to make up a word, that's a consideration, isn't it? I guess if we're talking about inevitable weight gain, we'll make it ChristMASSing from now on, right?)

Anyway, my parents took the kids for 24 hours. Mate and I went shopping, came home and wrapped, went shopping, came home and wrapped, and then cleaned up and looked innocent when the kids arrived. I thought we'd pulled it off pretty well, until we were watching television last night. There we were, second taped episode of Leverage, and there's *gasp* Goran Visjnic, who, bad guy or not is one of those people I'll drool over for free. And then, in Chicken's words, "You fell asleep like someone hit you on the head with a hammer."

*sigh* I begged them not to erase the episode. I REALLY like Goran Visjnic. 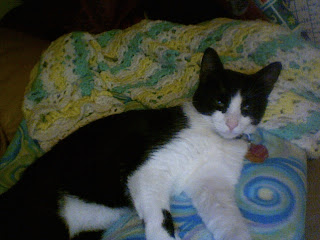 Anyway, good news? We've got most of our shopping done. Bad news? We're going to the mall today. Early. First of all, the little kids have to see Santa. It's tradition. (A nerve-wracking, exhausting tradition I wish I'd never started, but hell, we've got the two year picture of Zoomboy screaming on Santa's lap like it's an alien abduction, who's to argue with great moments in history?) Then there's the "give them money and hope they don't fuck up" tradition. This year, girls are buying for boys and boys are buying for girls. So, Zoomboy and Big T are going to buy for their sisters and me, and their sisters will buy for the boys and their dad. If you think it's not nerve wracking to give a teenager their younger sibling, a fistful of dollars, and send them into a crowd with a "Don't let go if that hand, and don't get mugged!" well, you've never watched the news.

And of course, we have to mail the Christmas cards. (This year, it's before Christmas. We're on a ROLL this year!) Mate was impressed--between me, Chicken, T and Zoomboy, we had those babies bagged, tagged, labeled in no time at all. And Squish even helped with the stamps! (Note to self--check stamps while Zoomboy is putting the envelopes in the slots. Zoomboy REALLY wants to send those cards--he was SO excited about it last night!)

And some Christmas knitting. I've got 1/2 a fingerless mitt to go, and I think I'm going to try for another pair before the big day itself (all the better to keep a pair for myself, cause I keep loosing mine!) and I'll be good to go! (I'm using a very simple pattern I sort of unvented (as EZ would say) but I like it. Sometimes simple knitting really is the best!

And as for writing? Okay... I'm gonna need sanctuary folks... Littlewitch is after me with a torch, a pitchfork, and a cattle prod (I think she shot a pointed tail out the top of her ass, all the better to hold the goddamned cattle prod!) because the Marcus/Phillip thing is longer than I thought it would be, and she wants me to get back to Living Promises, so I can finish that and start my one-day-a-week work on Quickening. So, uhm, if I come knocking on your door looking a little pale and carrying my laptop under my arm, could you maybe hide me in your garage for a week so I can finish Marcus and Phillip while she goes into Deacon withdrawals with weapons and an attitude? She's already a little cranky, dammit, and it's hard to type while you're running away!

And that's about it, folks. Wish us luck--because even if we survive the mall mauling, we'll have to come home and wrap, and trust me, with the damned cat running around, thinking everything is a big Steve playground, that's not as easy as it sounds either. *fume* Fucking cat. After yesterday's frantic wrapping, and a lot of beating the cat away with the much abused wrapping tubes, I was having visions of a damned fine fur hat. (Apparently, my big Christmas present to the cat is that she gets to live!)

Anyway--*whew* May your Christmassing be bright. And quick. And followed by good television and some hot chocolate and a good foot massage, eh?
Posted by Amy Lane at 6:31 AM

I have been Christmassing (two esses, I think), too. It's been hectic and I surely wish these presents would wrap themselves but I don't see that happening any time soon.

Not being in the Christmassing group, we are planning a movie, Chinese food, liquor and sex. Than again, both of the boys have moved into their own apartments. May the day be joyful, for whatever reason.
Verification? Stess. Really close to stress and who needs more of that?

Look out for Kenny Loggins!

Now don't hate me but I've been done with my Christmas shopping since before Thanksgiving! Makes it MUCH easier all around lol

as for hiding you? ummmmmm not gonna happen, soooooo sorry. See, I too want you to get back to Living Promises, so I can finish that and start your one-day-a-week work on Quickening. In fact, you may have to start hiding from me as well, and I am not easily distracted by Supernatural (Torchwood and Capt jack Harkness, maybe, but not Supernatural).
:0)

Enjoy the trip to see Santa...

Two sses. It's ssheer madness, and you wouldn't have it any other way. How many of the kids visit Santa? Just Squish and Zoom boy, or the whole crew?

Hooray for the cards!! You are Christmassing full bore!

Hugs and love and buncha ho,ho,ho!