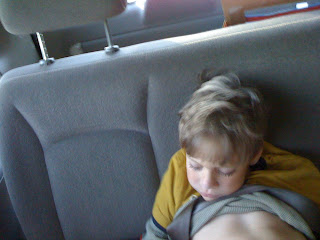 It's sort of a tradition with us. The day after Christmas is Human Vegetation Day-- and I sort of loves it. The photo above, while not a true depiction of Human Vegetation Day (because once we clean the house this morning all evidence will have been removed, and we like to keep it that way) is more of a symbolic gesture to the whole thing (that, and Mate is having a hell of a time importing Christmas photos from his iPhone.)

Yesterday, we did nothing.

Well, I read. I got (*squeeeee*) a wholly unexpected gift. I was not asking for gifts this year, I had no list of things I wanted, no secret longings--my big priority was getting the kids stuff that they REALLY wanted, and doing it within budget. (Well, sort of on that last part, but since Mate and I worked together a lot on it, I think we did okay.) If I could only give my kids a good Christmas, after all the other crap going on, then THAT would be my Christmas gift.

Mate, uhm, gave me a blouse he saw me admiring when we were shopping for Chicken (it's very pretty and very feminine, and I have no idea where I'll wear it. I don't care. I loves it.) and he gave me a Kindle.

Yup. An e-reader. I'm about delirious with electronic joy. Seriously-- the first thing I did was fill it with all of the books that were on my computer but that I didn't want to read because, well, sitting at my computer and reading them felt too much like work, and loading them onto my phone to read was killing my eyes, and I READ ONE! But even before that, I downloaded a friend's book (one she wrote) that I'd been promising to order, but I hadn't yet, because I wanted it in a form I could take with me and re-read (because she's really good) and I didn't want to make any purchases before we'd bought for the kids and I READ THAT! (Trusted Bond by Mary Calmes-- she's very good;-) And then I bought my friend Kat's book. And then I downloaded as many free classics as I could find.

And I loves it. I loves it in a way I didn't think I could love any electronic device besides my laptop... it's... it's like... TRUE love. Like "every time is like the first time" love. LIke... just LOOKING at it gives me the little post-coital shivers of ecstasy kind of love. THAT kind of love. Did I mention it sits nicely on my lap while I'm knitting, so I can knit and read easily without worrying about the book falling off my lap? *nods head* That could have something to do with it, oh yes it could.

Anyway-- let's just say this handy little device made human vegetation day that much sweeter. I was the happiest of eggplant, the most contented of broccoli, and the cats curled up at my feet. (Cat. The cat curled up at my feet. We don't know why she does that, because it's actually really annoying. Besides stepping on her accidentally, it also means that every now and then she decides our wiggling pink toes are fair game. That'll fuck up your knitting right fast, let me tell you!)

And Christmas? Let's just say the children were content. They got the toys they asked for, (mostly-- there are few corporate CEO's as greedy as small children at Christmastime) and forgot about the ones they didn't get. The older kids were happy (eventually... Big T does this thing where he sleeps for about an hour on Christmas Eve, and then, by the time he opens his gifts, he would LITERALLY have to get the complete electronic and movie department of the nearest Best Buy to not be a tearful mess from sheer sleeplessness and stress. Once he took a nap and realized that his i-Pod was actually an orgasmically awesome Christmas gift, he forgave Santa for not bringing the movie he really wanted. Then, he started to count his gift money from his birthday and Christmas, and realized he could AFFORD the movie he really wanted, whereas, he could not have afforded the iPod touch, and, let's just say, he had a merry Christmas.)

And I got to see family (both sets) and that's both exhausting and wonderful. Let's just say that after everyone fell fast asleep on the night of the 25th, Human Vegetation Day was inevitable.

Which is why we treasure it:-)

And now, I'm going to run away and clean house--because Human Vegetation Day is over, and it's time to get back to the happy business of being animal matter once again! (This includes crocheting two more coat hangars together with kitchen cotten, as a gift that I'll be giving in a couple of hours. If anyone has ever tried this, it sucks huge quantities of industrial strength gravel, but it's the only thing my MIL wanted, and, well, she has sublime moments of awesome, so she's worth it.)
Posted by Amy Lane at 8:08 AM

Sounds like it was a wonderful Christmas and Boxing/Vegetation Day!

I got an eReader too (Sony eReader Touch) I LOVES it. First books I put on it were yours :0)

Check out Project Gutenburg for free classics available in e-book formats. I have now got all the Oz books (my guilty reading pleasure) and am working my way through them very happily:)

I got a gift certificate to buy more books for my Kindle. It is awesome for carting around everywhere.

Those crocheted coat hangers are actually the bees knees for keeping things from slipping off, and for supporting heavy coats, or whatever. Tedious as hell to make, but really, really useful!

Human vegetation day should be a national holiday!

Hugs and love to you.

We have HVD as well but we call it Pajama Day because no one gets dressed. Food is whatever you can scrounge out of the fridge (and there's always cookies). This year, it was snowing hard so I sat in my sweat pants (too cold for pj's) and knit and listened to Black House by Stephen King-one of my favorites.

I look forward to that day every year.