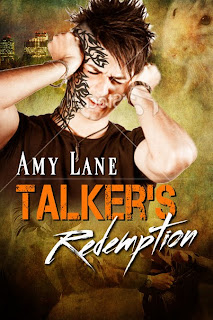 Okay-- first of all, this ISN'T the photo for Talker's Redemptionthat they eventually elected to use. There's a cute little trick that people use to download the photo from the website and then get it onto a blog--I don't know what it is, but I'm jealous. Anyway, this was one of the rejected photos, but for some reason, it was downloaded, and, well, I LIKED the rat. I didn't think anyone else would like it, but I liked it. Anyway, if you follow the link, you can see the blurb and the actual picture and everything... get ready to suffer. This one's not for the faint of heart! (It's also not out for another month, so I'm not getting too ramped up about it. The prayer will come:-)

In the meantime, I'm gonna be a little bit psyched. Granted, no blog reviews yet, but the buzz on both Hammer & Air and Christmas with Danny Fit seems to be... well, flattering. People seem to get that Hammer & Air is about the one big word, (Nope--not sex, not porn--the real one. The one that's important.) And the response to Danny Fit... I'm so pleased. People love my sweetheart couple in a way that really stuns me. They get Kit's hidden strength, Jesse's terrible vulnerability, and the way two damaged souls can really complete each other. That, and they all want to beat Kit's mother to death with a shoe--and I'm like, "Well, that's an appropriate response! I have done my job!"

And good news in the sanity department. I've found some affordable pre-school/day-care for Squish on a temporary basis. It's only two days a week, but I think it will make us both happier people, and I can get some work done without feeling guilty about letting the poor muffin veg by herself in the house. I'm happy--it starts tomorrow, twice a week for as long as I need it, and, well, yay. It's also next door--let's hear it for the zero in carbon emissions, yes?

Anyway, my friend Wendy came by today-- huzzah! Seriously-- haven't seen her, but she's on the odds with her boyfriend, and that usually means more face time--it was good to see her, and that's the truth. One of the funny things, though, was that she was watching Squish while I went and got the two kids who need rides home. While she was here, she answered a piteous mewling at our door, and discovered none other than... Steve, the rambunctious girl kitty, who had managed to escape as we were letting the dog out for her two-thousandth pee. Steve, suitably chastened, ran into Chicken's room to fitfully lick the mud away. Score? Wicked evil mom & Dad, who let kitty out only when it's pissing rain? Three. Overly curious cat who wants to go outside? Zero!

Yes, sometimes it's good to get away. Even if it's next door.

If Steve isn't pregnant, you dodged the bullet this time. Stubborn young females DO tend to think life in the real world will be funner than life at home. Glad she survived and made it home.

Hooray for your writing. It, for sure, does not bore. I understand that sucking does come into it occasionally, but not as a literary criticism.

Major hooray for day care! Even a couple of hours makes such a difference.

You know having 2 days a week on her own, away from you will change the squishy one. In a good way. She'll also have interesting things to talk about.