Not too much to report 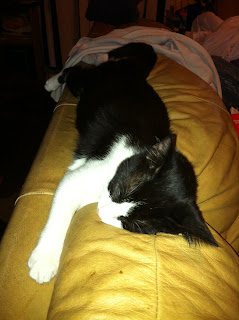 It is very possibly the perfect balance of Christmas vacation--there's not really TOO much to do, so everyone is enjoying the peace. Chicken stayed at a friends last night, and Big T got to watch an 'art movie. (The Serious Man-- uhm, it was an incredibly darkly comic bit, about a man with the most incredibly shitacular life, who kept asking his rabbis what he should do. To a one, they all said, "These bad things happening to you are probably your fault" and NOBODY told him to stand up for himself. It was funny, and the ending made you want to slap someone, hard and with prejudice. Only recommended if you're good at sitting on your hands and waiting for tornadoes.) Mom got to watch a lot of episodes of a show that only she likes (Bluebloods) and, of course, when I was done with all ten episodes, Mate was right there with me, going, "Donny Wahlberg IS going to tell his wife about hot club babe hitting on him, isn't he?" (The answer? Yes. And then the hot club babe asked him, "What does your wife got that I ain't got?" and Wahlberg said, "Me!" and I thought, "Yanno... we totally underestimate the appeal of middle aged balding men with potato shaped heads... he's looking sexier by the nanosecond.")

And, of course, the diet has gone to shit. I was doing good too! I need everyone to clear out of the house so I can clean it regularly and I don't think about eating. As recent weeks have proven, I'm pretty good at forgetting to shove every damned thing in my mouth if there is A. No crap in the house, and B. No one to tell me that food is good and just sitting at my computer is bad. That's when I'm REALLY good about not eating crap. (Hell, that's when I'm good about forgetting to eat, period.) Either way, I notice my consumption goes down when I've had enough sleep to make an informed decision. (Go figure!) I know that for certain I'll miss THAT if my situation changes!

Anyway-- if you're a member of the goodreads.com m/m forum,- you can go here and vote for moi- it's a list of the best m/m novels of the year, and a couple of my titles are on it. I know it's not an official thing but I have to say, I'm sort of honored. I was also surprised and honored to find myself on this list, although I have to roll my eyes slightly at the category. Why is it that m/m romance is automatically in the 'erotic' category? It's sort of irritating, because the sex scenes in Truth in the Dark are fairly restrained for het--you can find a Harlequin Temptation Blaze in a grocery store or a Wal-Mart with more brazen sexuality than Naef or Aerie-Smith, but you make it two pepper shakers instead of one of each? Suddenly, you're Lora Leigh without all the rather blunt terminology for the female anatomy. (Well, no cooters in sight, no cooters to have to describe, explain, and make function, right?) But that's okay, because another list you can find in goodreads.com is this one, this one, or this one, and again, the honor is there.

Today is boys day/girls day. The boys are going to go get haircuts--Mate's beard has grown in, and I know he's thinking of shaving it for the New Year, but he's afraid of what the kids will do. When Chicken was five (almost what Squish is now) he shaved his beard completely off. Chicken rounded the corner, looked up into daddy's beloved face, saw that the beard (then it was just a goatee, too) was gone, and hauled ass in the other direction, screaming and crying hysterically.

Chicken has forgotten the incident. Mate is scarred for life. He wants the beard gone--even just so he can remember the shape of his face without it (he's got the cutest little cleft in his chin--it's really pronounced, looks like a baby's ass. I'm a fan, and I do sort of miss it, yanno?) but he doesn't want to make Squish cry. I think, honestly, the Squish is made of more doughty stuff than Chicken was at this age. Squish is sort of unshakable, and Chicken was, for quite some time, a walking open nerve. I think Squish will be all right. I think Zoomboy will be oblivious to what the big deal was about, until suddenly he'll stop the entire world to say, "Wait! We saw Tangled BEFORE Dad shaved his beard, and we'll see some other movie AFTER he shaved his beard!" or, even better, "Shaved and shaved! Multiple meanings! You can shave ice, and you can shave a beard! Like Dad!" (He probably won't say that, because it's inaccurate, and he's really good with that whole 'multiple meanings' concept--but you guys get the picture.) Either way, I think the little people will be fine, the big people will be scarred for life, and I'll get to fondle that little baby's bottom of a chin cleft...

And then he'll grow it all back. *sigh*

I also want Big T's hair out of his eyes, and Zoomboy? Well, Zoomboy is almost frighteningly beautiful for a little boy--I want his hair cut so the world can see that.

So the boys are getting their hair cut, and the girls are going to the yarn store and to buy a Christmas present for Squish's friend--because so far, she's been planning to give the little girl a pipe-cleaner wrapped in a circle, and calling it a bracelet. Charming? Yes. But the little girl is eight years old, and I think we can do better.

Oh-- and the Christmas picture? We call that 'our little Christmas miracle'. We were in line to get the short people a picture. The big kids were going Christmas shopping with the short people in tow afterwards, and Big T took off to find something. He caught back up with us when we were in line and said, "Hey--Chicken and I are going to be in the picture too?" It hadn't been the plan, but there he was in the hat and the scarf and I look at Chicken in maniacal glee and Chicken looks back in horror and screams, "NO!" at the exact same time I scream "YES!" and guess who won?

Chicken even smiled.
Posted by Amy Lane at 7:42 AM

Nice picture. Glad you got it this year...

It is a nice picture. Mate could always do what Himself did when he shaved off his beard - have the little kids in the room "helping" to remove the beard. That way they get to see it coming off and know who it is underneath!

Squish looks like a young Queen Elizabeth - regal to the soles of her shoes! And she's surrounded by Will Shakespeare, Francis Drake, and Titania. Great photo!

Happiness to the new year and hugs to the shave spouse!

Awww - cute picture! Glad you're having a peaceful holiday break. :)

It's haircut weekend for us, too. We're looking a little scruffy around here. Pk and I were going to get our photos taken with Santa to give to the girls but the line was way too long to wait in. I did notice that Santa here at our mall had a love seat and not a throne this year. I don't think they wanted kids to sit on his lap. Very PC.