No Ghosts Were Harmed in this Picture 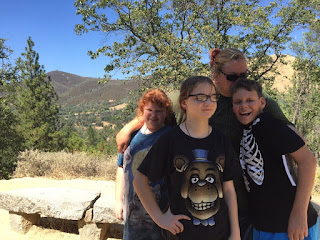 The stunning Ms. Kim Fielding and I went on a ghost quest today.  In our faithful army of questers, we had my children, Squish and ZoomBoy, and her beautiful and quirky daughter, Q.

Also along for the drive was Mate, who is most assuredly the most stalwart of knights, as we put him in charge of the younger knights for most of the quest.

There were no reports of drunken or angry excess or bacchanalian swinging from the light fixtures in Mate's party, so we chose well. 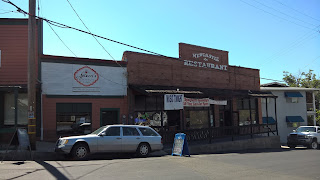 Our first stop was at a wayfaring station known as "Denny's", wherein we partook of food and studied magic maps and made many plans to quest for our quarry.  Then we belched heartily and took off for the kindly burgh of Newcastle, a place I visited oft times in my youth, but which assumed an eerie air as we went questing for the undead. 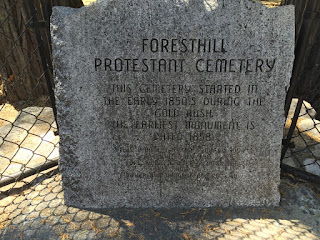 We were met by a sage, a small, withered man with a weather-worn appearance and eyes of the most shocking blue. An Innkeeper by trade, he stood outside his place of business (pictured above) and I spoke unto him:

"Heya--we're looking for the ghost that shows up at Constable Jack's!"

"You mean Victor? He's been DOCUMENTED-- the ghost program from cable, they've been here, we've had a seance, and I've got voice recordings and everything. Sometimes he sits on the rafters and watches us. Feel free to come inside and look at the pictures--they're Newcastle from it's inception. I like to keep it as sort of a museum." 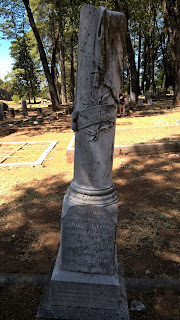 Whereupon I turned to my companion and said, "Hey, now we know how to ask people about ghosts!"

And she said, "Yeah-- that was easy. Whereto now?"

Our next station of the quest was at a historic cemetery in the bustling burgh of Foresthill, population 1,400. (If you've read my prior historical documents, the works of the Little Goddess, you will know that the fey, undead, and terminally furry are approximately three times that population... but they're not mentioned in the census.)

It was here that we searched the clues of the dead and buried, looking for signs of foul misdeeds or unrest within the spiritual plane. What we discovered was thus:

*  Most of the residents of this bit of acreage appeared to have been born in the 1860's-- we suspected they were the children of the people who had come to California in the gold rush in their youth. 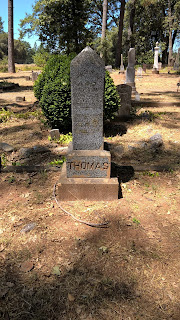 *  At least half of the headstones listed the place of birth of the deceased--because for a long time, nobody was born in this part of the world. No.  They left comfortable hamlets with safe topography to venture in covered wagons and on the backs of VERY uncomfortable animals to come hack a living out of the hot red dirt of the summer and the frozen clay of the winter once they discovered that one person in thirty could actually make a living finding gold.

*  The women in this part of the world were tough. I mean TOUGH. Where the spouse might be buried at the tender age of fifty or sixty, a lot of the women were buried at 85-100, long AFTER their children had given up the ghost in their forties.

*  If you were going to spend your final days haunting your cemetery, you have to admit, the view wasn't bad. 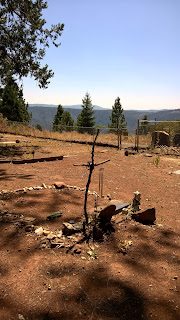 *   There was some BAD poetry on the headstones.

*  There was also some very wonky family politics going on. For instance, if Morgan was the beloved husband of Sarah, how come his wife Elizabeth is next to him in the plot?

*  The family plot that went for the filigree iron work depicting scenes from rural Wales which had vinca in place of ivy or roses was actually sort of sad. As was the the couple who died within a few years of each other in their forties, who's birthplaces were France and Belgium. Oh, my children, were you not far from home.

It was toward the end of these arcane ponderings of the ways of birth, life, and death, that my beloved Mate left the passel of other knights to confer with us and said, "We need to leave before I have to explain the condom on the ground." 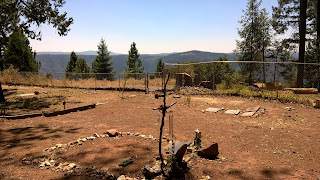 Whereupon Sir Kim Fielding and I began to reflect--"What kind of supernatural creature would be conceived in a graveyard?"  And both of us began to hunger for our writing implements to speculate, because such a creature would be wondrous indeed.

From the place of resting dead, we then traveled down into the gorge of the many half-dressed sunbathers and river wrestlers, and out again into the land of dashed dreams. 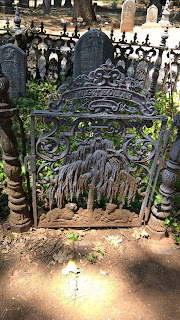 The place where James Marshall pulled an all nighter with an army of Mormons and Native Americans in an attempt to make the lumber mill go, and in the morning, went, "Hey-- there's shiny stuff in the water!"  (Or, more accurately, "Boys, it appears we've found gold.")

And of course, after that, his life went to hell.

We wandered the museums of the Chinese mercantile, the one that showed the ravages of placer mining, and the places the miners kept their criminals.

We did not, alas, hear any of the clanking, murmurings, or rustlings that, our sources did tell us, would indicate members of the ghostly community were visiting. 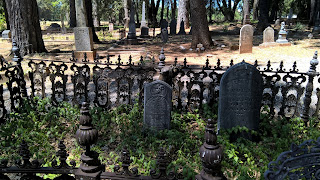 Our party of knights arrived at the consensus that it was, quite possibly, too damned hot for such going ons.

I myself ventured into a modest establishment of curiosities and came back with two books and a pretty smelling soap (and some cherry candies that were YUM!)  Upon consulting the book for ghosts, I learned that James Marshall is said to haunt his own monument, as he should, because he has his own ballad. Perhaps you've heard of it? 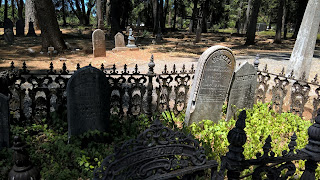 Indeed, Mr. Marshall WAS a most lonesome loser. All finding gold got him was a group of shadow hunters trying to figure out where he'd find gold again. He started up a number of businesses after the discovery--all of which failed miserably. He was given a pension for finding gold, but he drank it away, and when he was arguing for more money, he dropped his bottle of brandy on the floor of the legislature. He died practically penniless, living off his garden and some blacksmithing work and some other trade that left creosote in his hair and his beard and made people afraid of his stench. 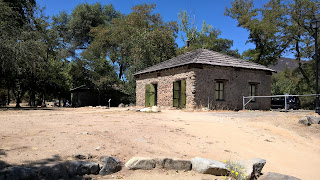 However, when he died people got so excited about honoring him that they shipped wagons full of ice to keep his body from disintegrating in the godless heat, and they decided to haul his literally rotting carcass all the way to Coloma, the place that ruined his life.

And then they erected a statue.

So, yeah. He might have an irritated ghost wandering around, and dude, who could blame him. 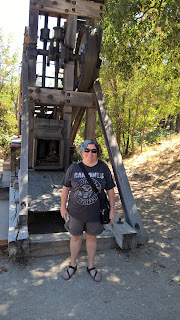 So we have pictures of the mercantile, and pictures of some of the mining equipment, and the following conversation:

Me: Did you see that? They tried to break up the ore bearing rock with a big granite stone called a Chilean wheel.

Kim: Did it work?

Me: No-- but they also tried an attare--one of those mill stones that have the donkeys on the four corners who drag a big weight.

Mate: Did it work?

Me: No-- they had to keep using that big waffle stomper thing.(Pictured on the right, with our beautiful blue-haired Sir Kim standing in front.)

Mate: Then what was the point? 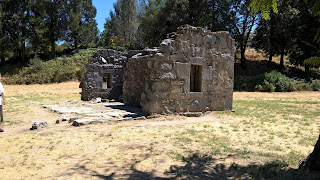 Me:  The point was, they did try things that might not make their lives suck like hearing that big metal foot smashing for twenty-four hours straight. 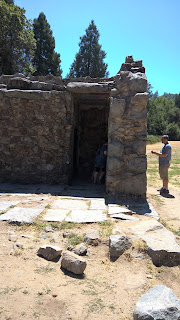 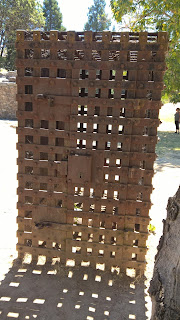 The lesser knights frolicked and gamboled about the ruins of the prison and the "hot box" for particularly recalcitrant prisoners, and I mused privately that I wasn't sure which edifice would ho use more spirits: a prison or a church. I shall let my reader have that debate on his or her own ;-)

Notice that there is a picture of the handsome knight Sir Mate to the right. Just to prove I didn't imagine him ;-)

Anyway-- twas at this point that we grew weary of the quest and decided to venture to see the statue of that poor soul who discovered gold. We had as of yet encountered no spirits, but we were still hopeful. 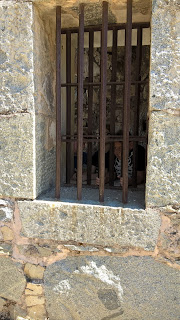 We also wanted to get the hell out of the heat. It was around 95 degrees, and although the lesser knights kept begging to go swimming in the river, we had neither suits nor life jackets, and the current was quite swift and perhaps even life threatening--especially to the three older knights who were a little worried about the younger ones. 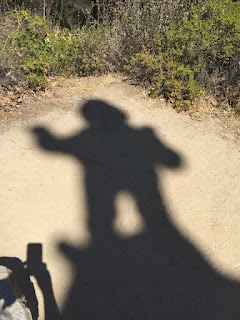 (Can you see the lesser knights imprisoned in the jail to my left? Yes-- there might be some ghosts in there--look closely!)

But at last we ventured to the statue, along the states shortest highway--indeed, there was a sign to prove that claim!

At the statue we saw a lovely view, a spooky shadow...

And a ghost, sitting to the left of our little group when Sir Kim took the photo. 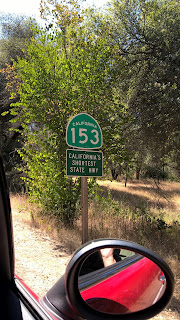 The children saw it too ;-)

And then our quest was at an end. We were ready to retire to a public house and partake of delicious food as we recounted our adventures over cool ale. (Or soda-- whichever.)

However, as Kim and I followed the good Knight Mate, and his passel of lesser knights in the Honda conveyance, we saw him execute a detour.

Me: Where's he going?

Kim: Back to the statue? Did we forget something?

Kim: That's totally valid. Here-- you take one too! 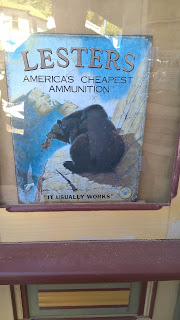 And then we traveled along Highway 49 until we came a lovely--and aptly named place--called Hangtown.  We journeyed to Kim and Q's inn-- a lovely hotel, full of ghosts and haunted elevators, but I will let her tell you of her own adventures HERE. (As soon as her blog is ready, I'll link it.)

And then we partook of pies.

Seriously-- Z-Pie-- like chicken pot pies, but mine had steak and cabernet sauce and Kim's had indian curried chicken and ZoomBoy's had sausage and cheese. They were WONDERFUL. 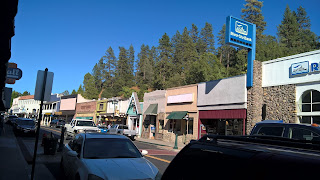 As was the apple pie ala mode I insisted on sharing with everyone. Because YUM.

And then we were done. Sir Mate had served a fulfilling but trying role as herder of the lesser knights, and he was ready for a nap--and so were our lesser knights--and we parted ways with the wondrous Sir Kim and her adorably quirky Q.

But we had a great time.

I will hunt for ghosts with these people any day.