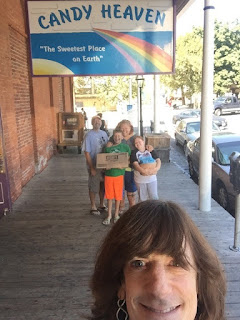 Okay-- so yesterday was opening day, and this always means exhaustion and sort of a slow Sunday.

But Tart and Sweet is out on September 5th, and I got my paperback copies this week, and that means it was time to go see Darrin!

Darrin was thrilled to see us-- and I gave him copies of Fish Out of Water and Winter Ball, mostly so I would have an excuse to go see him now that the series based on his store is over. (I want to give I'm the sequels, natch ;-)

And I took a lot more pictures than this--but I just sent a pretty lengthy post to Alpha Book Club, and wanted to give them an exclusive content crack at those pictures, because Jaime was so nice about asking. 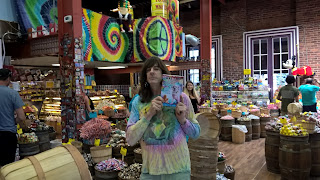 But these are two good ones-- and I think they give you a great impression of both Darrin and his beloved store. He's awesome. Alas, he doesn't read your pictures in Pixy Stix powder, but he is an awfully nice guy, and his employees are always kind.

You may notice my family in the background? See that bucket Squish is holding? Yup-- finally he succeeded in getting me to take a full bucket of candy. In this case, he dumped the bucket into the plastic bag, and then the plastic bag into the bucket, and then realized the bag wasn't coming out of the bucket so we got that too.

So while I'm sad that the series is ending, I'm happy that Darrin's still going to be happy to see me. I sure have enjoyed being a tiny part of Candy Heaven for the last two years.

Well, I've been doing it for fourteen years, and the little kids have been dragged to it, one way or another, since they were born. (ZoomBoy was born on Saturday morning in November. His father left the hospital, took Chicken to her soccer game, then to a slumber party, then took Big T to a movie, and then went home and had himself a nice little coma.)  But some days stand out more than others.

The days that were 105+, we all seem to remember, because everybody came home in a coma.

This year was different because Mate-- president of the club, remember-- was not actually present at opening day. In this case, the league put out the schedule for Mate's seeding tournament about a month after the soccer club had started planning opening day. So Mate helped plan a lot of it, and then he didn't get to go to any of it.

Squish and I did though. But I missed Squish's first game.

Mate had me volunteer to supervise at the bounce houses-- the obstacle course, to be precise. Squish's first game started at 10, and my shift was from 9:00--9:30, so, easy to do, right?

Well, the parade and presentation didn't end until 9:15, so I got to the house around 9:20, not expecting any kids to be on the house, because hello parade, where all the kids were supposed to BE, right?

there were about fifty kids, all over the damned bounce house, and they were going to kill each other if someone didn't get a handle on things.

So I did. "You--go through. You guys up there, slide immediately. No, don't wait for your friend, get down, go through, get out. It's an obstacle course not a mosh pit. Wait for the little kid to get out of the way. You, hurry. You, slide. Did I not say hurry? Get out of the house or I'll get your father. Yes, I know who he is. I don't care if he's here. Move it!"  And so on.

I had the second part of the course fairly smooth and I went to the beginning and realized a random mother had started evening out the incoming as I was evening out the outgoing.

I got her name--and hopefully her team got credit for helping, because that's one of the reasons you volunteer, is to get a certain amount of credit for your team, and when she had to leave, I was stuck. I mean, nobody came to help out. And I couldn't just walk away-- kids were all over this thing. They were just asking for a kid to get hurt, and I'm not wired that way.

But after the first half-hour, all of that crisp military precision I started out with started to leak away. I became shrill and terrible, and I'm a little bit proud of this.

"You! Yes you! You can't sneak into the side. No you can't. You need to go wait in line like everyone else. You don't wanna? What do you mean you don't wanna? Where's your father? Your father's not here. Where's your mother? Your mother's not here? THEN GET OFF THE FIELD. NOW. YOU DON'T BELONG HERE. Oh, your Auntie is right over there? Let me just talk to her about what you've been doing here, give me just a second."

I lucked out. Auntie was RIGHT behind the bounce house, watching someone's game, and she got an earful.

I went back, and my reputation had spread.

When I said, "You need to clear out of this end or I will get your parent," those kids BELIEVED!" I mean, I wasn't nice, they hated and feared me, but by god they did not jump on top of each other when they came swishing down the slide, did they? They didn't camp out at the end, waiting to get walked on and hurt, did they? Oh no. I may have been the bitter bounce house bitch, but I was the EFFECTIVE bitter bounce house bitch, and I didn't let them forget it.

Of course being this horrible for two hours sucked all the joy out of it for me.

That's how long I went, and then another parent--from our team--walked up to me and said, "You know, what you really need is one person on each end. I did this last year. I just climbed up top and sat there. It was easy."

"Sure! Just make sure our team gets lots of credit!"

I got to the field in time for Squish's next game (and so did he, which was good, because watching the kids is kind of the point).  They lost, and then we cleared out of there quick to bring food to Mate and Zoomboy, who had two more games of their seeding tournament to go.

We got home and everybody fell asleep around nine.

Except me--I start work when everyone goes to bed.

But I"m not going to forget being the bitter bounce house bitch.

I was starting to miss teaching--sincerely. I love talking about literature, I love teenagers, I love the whole dynamic.

But thanks to two hours at the bounce house, I also remember why I was so excited to leave!