The Perils of Bureaucracy and the Wisdom of Apocalypse Boy 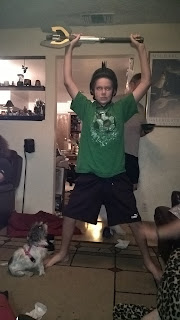 So, like many of my fellow authors, I submitted to the RITA's today--
the hardest part is preparing myself for the fact that there are so many wonderful authors that my previous nomination was probably a fluke. That's okay-- I have so much love and respect for my fellows, that I think if anyone I know is nominated next time out, I'll be pretty damned thrilled for them too. One year could be a fluke, one author could be an accident, but this genre has so much to offer-- I look forward to seeing it grow.

All that being said, a lot of us had a moment of "Tech hard! Grok make computer go! Go, Grok, go! Go, computer, go!" while we were filling out the forms.

Which is what prompted me to write the Tweet that inspired the meme that you see before you!

A meme I'm going to treasure for a very long time! Thanks, Kristin!

And in other news--

Zoomboy (seen here in his @midnight costume as Apocalypse Boy, complete with camera induced psycho eyes and the furry minion at his feet) has apparently had a whole lot of free time on the computer.

ZB: He exploited the natives and enslaved them and mutilated them and sold the girls into prostitution.

Me: You're right-- he was a really awful human being. I'm impressed-- you learned this in school?

Me: Where all good liberal boys go to learn their history-- I understand.

And seriously-- while I am depressed that kids are continually taught that Columbus was a hero (he was an asshole) it's nice that there are little bits of actual history floating around.

And now, if you will excuse me, I need to contemplate the traffic ticket and the failure to appear charge tacked to the end of it (I was at GRL), and figure out if I will get my royalty checks soon enough to pay that bad boy before I get my license suspended.

And then I'll be repeatedly banging my head against the desk-- wasn't I just here?
Posted by Amy Lane at 11:55 PM