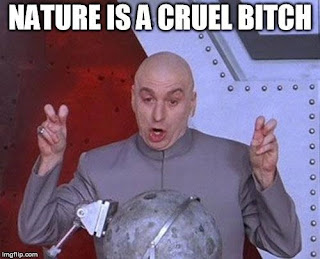 *  At the beginning of school, I gave Squish's class a bunch of my old swag pens-- the purple ones that had the little plot bunnies on them. Squish reports that she is tickled when she realizes the entire class is using mom's Angst & Pain pens. She also reports that the entire class is tickled because they easily convert to the world's BEST spit-wad guns. *sigh*  Remember that thing about the road to hell and good intentions? I hope the teacher forgives me as she picks spit wads out of her hair.

* As reported on Twitter/FB, Squish left her backpack at home today.  The resounding opinion was to simply let her reap the natural consequences of her screw up.  Apparently the natural consequences of her screw up were for mom to go home, walk the dogs in her pajamas (how they got into her pajamas I'll never know) and then put the dogs BACK into the car, grab the backpack and return it to school, disapproved of barking dogs et al.

Mother Nature is a cruel ass bitch. (And thank you, Kristen, again for the lovely memes to prove it!) 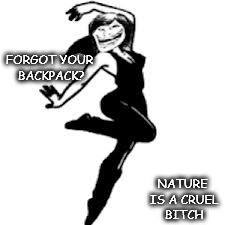 *  Big T got to go off on a rant about his favorite movie directors today-- I felt bad. He kept apologizing, but really, he'd just put a new gloss on his bright and shiny gods and he wanted to share. I helped him do that as much as humanly possible--because Lynch and Aronofsky ARE powerful gods, and I see nothing wrong with the altars at which he worships.

* Big T also got a new computer with his own money. He's so very proud.

*  Zoomboy has been learning about string theory, time travel, the big crunch following the big bang, and WWII.  Today, he told me that he wanted to write a dystopian story in which the Nazis had won WWII and mankind was still working to rebel against their regime. (I shit you not.)

"Yeah, but I need to find a new Hitler-- because he would have passed away even if he lived."

"Yeah," I agreed, and then, heaven help me, I got lost in the allegorical politics that have so much potential given that premise. "And Dick Cheney could be the leader, and Ted Cruz and Paul Ryan could be his minions and…"

"Mom," he said pityingly, "I think I need something more original than that." 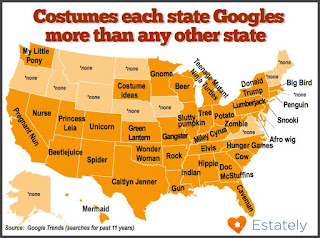 I had to give him a high five for that-- he had me there.

*  Chicken is applying for the GRE. I'm so hopeful for her-- I think she'll really enjoy the Master's program at San Diego State.  That said, she is lost in facnfiction as a way to destress, and I'm so jealous that she has that kind of time.

*  Oh!  And we're almost done with the Halloween costumes… speaking of which, which state are YOU from?

LOL, oh that is great, in our house the cat rules and the dog just thinks she does. The ferrets know better ;) The rule in our house is never leave the bedroom without street clothes. I think that is rule 14 ;)

LOL, oh that is great, in our house the cat rules and the dog just thinks she does. The ferrets know better ;) The rule in our house is never leave the bedroom without street clothes. I think that is rule 14 ;)

Since GRL is in Kansas City next year, maybe the theme will be Kansas City Barbeque and I can rock a beer costume to represent my state :)