Everything We Learned in School Is Bullshit

Okay-- first I'll clarify the statement I made on Twitter-- 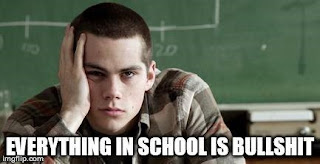 The other day, when I thought the apocalypse was starting as I sat on the toilet, apparently what was really happening was that the local SWAT Team was serving an eviction notice, and issuing condemned building notices to be taped in the windows.  Apparently that day one of the idiot assholes next door was standing on the roof trying to get away. (Kids, seriously. Don't do drugs. It makes you stupid.)

Anyway-- that was exciting, and then I went to aqua, which I did today, for that matter.  And when I got back today, after picking up the kids, there was a construction crew boarding up the house.

"So," I said, walking up to the two construction guys with Geoffie in my arms.  "Uh, how bad was it?"

"We've seen worse," one of the guys said. Then he looked around.  "But there was a lot of heroin needles in there. That was pretty bad."

I nodded, thinking that explained why three weeks ago my eyes had been burning and the "buyer" activity had increased outside the house. That was just about the time we'd all started calling the cops.

"There's some broken windows, and a lot of drug paraphernalia, but its pretty sound."

I left the boys to work while we unloaded groceries in the house, but inside I was just so, so grateful.  They were gone. The place had been boarded up. The meth-cooking squatters are gone.  And you know what else I found out?

The guy across the street, who's sort of a curmudgeon with an iron fence and dogs?  Apparently his son in law is in charge of evictions in this locale. Which explains how it happened so fast.

So we don't have to gather the family and move, and I, for one, am very very grateful.

All that being covered, I do believe I promised a little bit of Cartinski!


"Sheriff Stilinski!" Derek said in a panic. "Sir, did you forget what day it is?"

John stared at him from his desk for a moment, nonplused. "Tuesday?"

Derek made a sound of impatience-- which was something he rarely did.  In fact, most of the time he treated John with sort of an exquisite courtesy, as though believing his boyfriend's father wasn't just going to go batshit on him with a shotgun wasn't ever in the cards, but Derek would do everything in his repertoire to try to keep it from happening.

Impatience, from Derek, meant that something was dire.

Derek glowered and slid into the room, closing the door behind him. Yeah, sure, Parrish knew about the supernatural nature of Beacon Hills, but Derek had left before that happened, and he didn't trust easily.  "It's the night of the full moon, sir," he said, eyes darting as though he were trapped. "And we're in a time of peace right now, which means…"  He gestured at John to make the leap and catch up.

John stared at him in horror because he was already there. "Oh, dear lord," he muttered. "Fuck. Carter is staying in Eureka tonight--I'll try to get over there and sleep in his spare bedroom or something."  Carter was watching his children-- John wasn't going to intrude on his boyfriend's child time, but… but the full moon, during peace time. Ugh.

Derek nodded. "I knew you could see reason-- are you going to warn anybody else?"

The Sheriff looked up outside his window and watched as all of the non supernatural deputies began to shift uneasily, standing up and putting on their jackets and making to get the hell out of dodge.  All of the supernatural deputies looked up at the clock with an air of long-suffering. He knew they didn't turn furry if they didn't want to--but apparently they just made shit too intense for the everyday average guys who were fine facing bullets but apparently not so great with the full moon.

"I think they already know," he said dryly. He stood up and started to gather his jacket, his keys and his cellphone. He paused at the door. "So, uh, Stiles…" he asked delicately, and he was not reassured when Derek licked his lips, his stunning blue eyes hooded and ripe with something John did not want to think about directed at his baby boy.

"Stiles and I are gonna be fine," Derek murmured. "But you should probably find a safe place to hole up, okay?"

"Yeah," JOhn muttered, hoping he wasn't really abandoning his town to Babylon. "Sure. Back tomorrow morning."

He tore out of there like the fiends of hell were after him.

One of the first things that Carter had done was outfit his Jeep with bluetooth speakers, so he could talk to someone without looking at the phone. John hated new technology, and he wouldn't have used it if Carter hadn't rigged it to interact with his phone whenever he was in the car.  The fact was, he didn't know how to not use the phone in the car anymore, and once he'd muttered to himself, "Dammit, I need to talk to Jack!" and had found himself actually talking to Jack while he'd been out on a call.

So he was relieved when he slid behind the wheel, turned the car on and said, "I need to speak to Carter."

John groaned. "He needs to get this message, dammit-- like right now!"

"This unit understands, Sheriff Stilinski. But Carter isn't able to be reached--"

"Can I leave a message?" he asked, not sure what he could say.

"At the tone, leave a message.  Beeeep!"

John took a breath.  "Carter, it's the full moon. Every werewolf in Beacon Hills is in heat. I'm coming to your place--I'll sleep in the car in the front of the house if I have to, but please, don't make me watch werewolves fucking. Hang up, car."

There was no dial tone.

"This call is over!"

John let out a little sob and decided to spend his energy getting to Eureka as fast as he could.

He passed not one, not two, but three werewolf couples, fornicating in the woods as he drove.  The last one was Scott-- he was sure it was Scott, he'd recognize that werewolf anywhere, and Scott was was viciously humping a young pup of a male werewolf as the Sheriff passed the border from Beacon Hills to Eureka.

Count two, it hadn't been Derek in human form, fornicating with John's son in public.

Dude, it was pretty much John Stilinski's lucky day right there, anybody would say that oh yes they would.

but that didn't stop John from speeding through Eureka, taking the turnoff to his boyfriend's house with enough speed to slide the back end right into a tree.  It didn't even phase him-- he got control of the Jeep and continued to race down the road until he saw the glimmer of the forcefield that would keep him out until Carter got home.

Well, John understood that Carter's teenage son was there, babysitting the daughter Jack had helped raise and the one he'd spawned but hadn't.  John was all for keeping them safe-- and he'd never even met them.

He came to a halt and cut the motor, sighing with relief.  Then it hit him.

God, he was hungry. And wide awake. And he had nothing to do until Carter decided to come home.

Goddammit. He was about to become the world's most bored man. He functioned on four hours of sleep for Christ's sake-- what was he supposed to do, just sitting outside, in woods where no werewolves fucked? It was just so… so peaceful, out here, and so quiet… and so… so un-werewolf-infested and…

Jack saw him, sleeping in the front of his Jeep as Carter pulled up.  He looked rumpled and tired and dear.  Carter's car had tried to tell him he'd had a car, but Carter had been neck deep in mad scientists trying to turn the town's water supply into grape jelly, so he hadn't been able to answer.

Now he figured that had probably been a pretty important phone call.  He parked his own car and hopped out, tapping on John's window.  John startled awake, looking disoriented and hostile fora moment, and then he rolled down his window.  "Sorry," he mumbled. "I fell asleep."

"I gathered," Carter cracked, grinning. God, he looked delicious, eyes opening and closing as he tried to orient himself, square jaw a little slack from sleep.  "So, what's the deal?"

"It's the full moon," John mumbled, frowning. "It was horrible--"

"Casualties?" Jack asked, suddenly afraid. He hadn't heard that the full moon caused more deaths, but that was because until he and John hooked up, nobody from either town talked to each other!

"No!" John protested. "Sex! It was all over the damned town! Werewolves humping everywhere! And they howl, and they don't care where they're shoving their things… and they knot. It's not a myth-- they knot even human, and all the humans apparently love it because they're all screaming, 'My God, do that more!'"  John shuddered and sank into his seat.  "So," he finished. "You know. I'd rather sleep in front of your house than go back to that."

Carter adjusted himself and stared at his boyfriend with big eyes.  "I'd, uh, rather take you inside, introduce you to the family, and see if Sarah couldn't activate the sound proof walls."

John stared at him, lean mouth slightly parted, and Carter took the opportunity to stick his head in the window and plunder. Ah, sleep and grumpy Sheriff. Carter loved that.

Carter pulled back from the kiss and smiled, thinking that his own night had just looked up considerably. "So," he said, feeling smug and self-satisfied, "how about we go inside and I feed you, and we introduce you to the kids, and then put them to bed."

Carter grinned lasciviously. "Sheriff Stilinski, I really don't know what knotting is. HOw about sometime this evening, you tell me, okay?"

Oh! Carter could tell by the flush that washed his cheeks that he'd caught up with him now.

"Fine," John m uttered. "I'll tell you what it means-- but I won't demonstrate!" 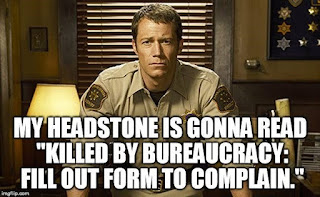 Jack threw his head back and laughed. It was going to be a very good night!