And Then the Wolf Zigged Right 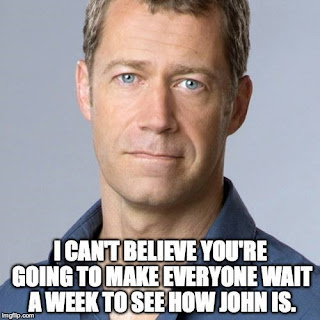 Okay guys-- I was hoping I'd finish this installment tonight, but it's been something of a day, on the tail end of something of a week. I'm going to hit you with my best shot and hope for the best, okay?  (Turns out my best shot was not much. Sorry!  Maybe I'll add more to it tomorrow.)

"It was not," John Stilinski said muzzily from the hospital bed. "Not Jack's fault, not Stiles's fault…"

"znice," he mumbled. "So nice my son loves me. Would be even better if there wasn't such a big fuss everyone trying to get killed. That would be real frickin' nice."

"I'd have to agree with that," Derek muttered, sending Stiles a dark look.

"I was not trying to get killed!" Stiles retorted. "What I was trying to do was keep a certain werewolf from getting killed!"

"So was I," John said happily. "Me too! Scott--I was trying to keep Scott from getting killed."  He sobered, all business.  "We know Scott," he said, looking at Carter like Carter would find this totally okay. "He's Stiles's best friend-- good guy. Alpha werewolf. Lost his girlfriend in high school, very sad." 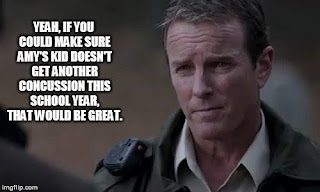 "Not as sad as him trying to date all those women when he's nuts bout Liam," Stiles muttered.

John shook his head like he was trying to wave that way. "I don't want to know about Scott's sex life," he begged. "I know way too much about yours."

"Well right backatcha," Stiles snapped, and Derek was a dear and smacked him on the back of the head.

"That's your fault,"Derek hissed. "Now let's make sure your dad's alright so he can talk to Carter!"

John smiled at his son, feeling like the whole world was a big balloon, and nodded. "Fine," he said, still stoned. "I like Carter. He's okay."

Stiles grunted and glared some more, but Derek nudged him meaningfully.  Stiles sighed and kissed his dad on the cheek. "Get better, Dad. We'll check with you a little later, okay?"

Sheriff Stilinski nodded, and then stared at Carter for a moment.  "You're staying, right," he said, eyes big.

Carter pinched the bridge of his nose and sighed. "You asked," he said after a sigh-- but he was still squeezing John's hand.

"You like me," John said loopily. "Can't ditch a bozo who likes me."

A corner of Jack's mouth quirked up. "Yeah, neither can I--but I'm telling you, Johnny boy, it's a rough sell when you jump into a hydro-electron atomic capacitor with nothing more than a baseball bat."

John nodded. "I'll be honest-- I was going for the guy with the gun."

"Yeah, I figured when the capacitor went off. You were damned excited about running in font of that thing, do you know that?"  Jack shuddered, and it was John's turn to squeeze his hand.

"We'll have to agree to disagree," he slurred, but Jack shook his head.

John groaned inwardly. He had the feeling Jack was not going to forgive him easily for how it all went down.