The Bells of Times Square 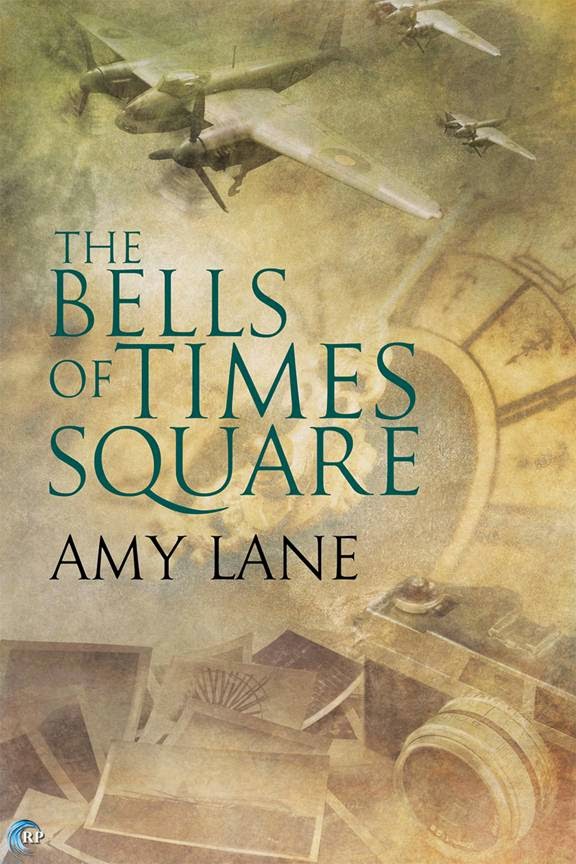 Okay-- I'll be honest.  I spent four days writing up the posts and choosing the excerpts for the blog tour for this one, and *whew* I'm exhausted. Part of the reason I left Whiskey and Patrick up for the extra day was that I was all blogged out.  Between the tour, a blog I wrote for the Script Chics about Sidecar, and a couple of interviews, I honestly couldn't talk about myself, my life, or my connection to my books for one more post--not to keep my blog posts current, and barely to explain to Mate why I was sort of taciturn and unresponsive.

Anyway, I took a day just writing fiction and running errands, and we're about to go out to dinner and get a Christmas tree, and I might actually clean off my table and put my Christmas cards up on the cupboard like I do every year.  Sweet!  Mate and I are finally feeling like Christmas!  (Last weekend we were like, "Do you wanna get a big tree?  And get out the pretty lights? I think the time is overdue, to… oh hell… I'm hearing "Do you want to build a snow man?" simultaneously with "Do you want to hide a body?" as I write that.  Maybe stop. I'll do that for another blog post, kk?  The upshot was, no, we were not ready for Christmas. We were, in fact, ready to sleep extra long.)

I also, during that day, helped celebrate Big T's birthday. He wanted two of his friends--a couple-- to come with him and his dad to the movies (they were seeing something his dad would like, but that the little kids and I would not) and Mate ended up giving them a ride, because they'd just moved into a shitty apartment and their car had been stolen.

"Oh my God!" I said to Mate. "He's got friends that were just like us when we were his age!"

"I know," Mate said in wonder.  "I sprang for their movie ticket."

So good to know that young, together, and desperately broke hasn't changed.  It was nice to be on the benefactor side of that-- I remember those "real" adults who would buy us dinner and such when we were that broke. Am still grateful.

And I've been taking the dogs for a walk around the block in the last couple of days.  Today, Squish came with me, and I put the following perspective on Johnnie, peeing every three seconds.  (I posted this on FB too, so you're not imaging it if it feels like you read it twice.)


Squish, as we're walking the dogs: Johnnie, you don't have to smell EVERYTHING!
Me: Actually, taking a walk for Johnnie is like surfing Facebook. He puts his nose to the ground and gets a feeling for who's doing what and what's doing who. 'Oh, the Great Dane was here. No, he hasn't eaten the Pomeranian yet-- must be biding his time.'
Squish: So when he stops to lift his leg…
Me: That's just him, pushing "Like".
Squish: And when he took a poop?
Me: He was COMMENTING on their ass.
Squish--watching as both dogs stop completely and start sniffing a guy-wire post springing up on the side of a yard: And what are they doing there?
Me (grimly): Man, watch out for Buzzfeed-- I'm telling you, that place will stop you dead every time.

And there you go-- That's why the dog has to lift his leg every house or so.

So, on to the other things here.

On Monday, The Bells of Times Square will be released from amazon, but it's already available from Riptide as of last night!

Wait-- wait-- let me give you the blurb:

Every New Year’s Eve since 1946, Nate Meyer has ventured alone to Times Square to listen for the ghostly church bells he and his long-lost wartime lover vowed to hear together. This year, however, his grandson Blaine is pushing Nate through the Manhattan streets, revealing his secrets to his silent, stroke-stricken grandfather.
When Blaine introduces his boyfriend to his beloved grandfather, he has no idea that Nate holds a similar secret. As they endure the chilly death of the old year, Nate is drawn back in memory to a much earlier time . . . and to Walter.
Long before, in a peace carefully crafted in the heart of wartime tumult, Nate and Walter forged a loving home in the midst of violence and chaos. But nothing in war is permanent, and now all Nate has is memories of a man his family never knew existed. And a hope that he’ll finally hear the church bells that will unite everybody—including the lovers who hid the best and most sacred parts of their hearts.
- See more at Riptide!
Or purchase at Amazon :-)

Pretty good blurb, right? Hints at tragedy? The "Titanic" ending as I've been calling it.  Or, you know, instead of HEA or HFN, the HAE! Happy After Ever!  (I want that to catch on-- everybody with me?)

Anyway-- so this book, that's gotten so much critical acclaim (Publishers Weekly, Romantic Times, Library Journal-- no lie!) is finally coming out!

People think you get over that, but some projects are so very personal.  I've said before--a lot--that my grandparents inspired this one, and if you read the afterward, you'll see how.  But I also put some of that connection into the blog posts for my tour, and by all means show up and sign up for the Rafflecopter (which Andrea is setting up for me. God, I'm dumb. I seriously can't deal.)  There will be a prize. Some sort of prize.  (I was going to offer something from my backlist, but I've gotten a lot of LOVELY reviews lately, and between that and writing this many blog posts, I think I just totally blew out my capacity for self involvement for a while. Seriously. I felt incredibly douchey-- and don't get me started on looking at my Twitter feed. I'm like, "I am a self-pimping HO-BAG!" So I'm going to try to change that to Riptide credit, because it will let me feel less like a douchey, self-pimping ho-bag.)

So, if you want to read some of the stuff that went into this book-- which I am still SO AMAZINGLY proud of-- here are the stops on the blog tour!  I'll probably post this again, as the blogs are posted, but one of the things to keep in mind is that (usually) the ones labeled "Spotlight stop" are mostly just the blurb and the contest.  The ones without the label "Spotlight stop" will have an original blog post, or an excerpt with some exclusive commentary from yours truly.  So, I'm gonna be everybody's favorite slutty internet surfer next week-- feel free to join me and surf!

And with that, I'm signing off for dinner and a tree!

But first-- please-- if you read it, and especially if you love it-- be sure to review it-- amazon.com, Riptide, GoodReads-- it's always good to see people loving the work.