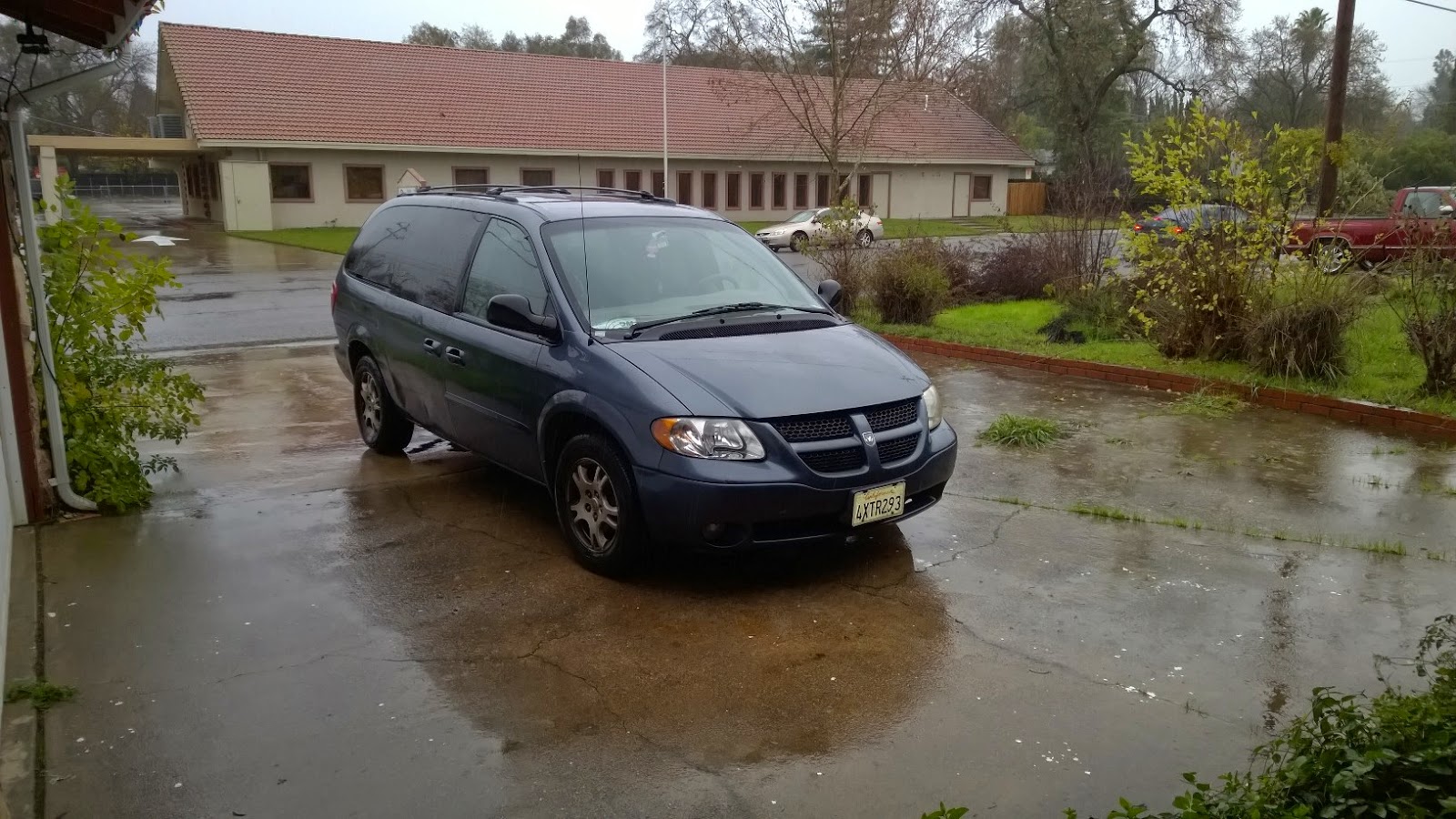 I texted Mate yesterday morning, when I was dropping the kids off for school

I think someone's been fucking with my car. The steering wheel position was off, and it's making really bad noises.

He texted me back.  Ha ha! No-- I took it last night. Sorry about the noise. That just started on the way back from dance lessons.

To which I responded:  It's getting worse.

It was, too.  I was actually embarrassed in the McDonald's drive-thru-- and so was the girl helping me.  She didn't even fawn over Geoff and Johnnie like she usually does, just sort of went about her business, wincing in reaction to the loud "brap brap brap brap" issuing from under the car's hood.

But still, the car had been making noise for a long time.  The guys at Car Czar said "Well, your engine's going.  Could be in fifty miles, could by five-thousand, could be fifty thousand-- but it's going. And, you know, old car…"

It wouldn't be worth it to replace the engine.

So we planned to get a new one in January, with my next big check.

I was picking the kids up from school early, so we could go see The Hobbit with Mate and his friends in El Dorado Hills.  For those not from the area, El Dorado Hills is sort of a swank suburb, and the Palladio is a vast, outdoor mall, that is really nice. When Mate wants a real nice date--like, when I've done makeup and worn some of my con-clothes just for him-- he takes me to the Palladio, and we hope my car doesn't attract the nearest traffic cop.  (There seems to be an unspoken "no driving while white trash" rule in Folsom and El Dorado Hills, because if my registration even smells close to expired, I get pulled up when I'm there getting Mate.)

By the time I got to the Palladio, my car sounded like Chitty-Chitty-Bang-Bang.  But it wasn't gonna fly.  In fact, it lost power with every acceleration. By the time I'd finished the 12 mile drive to Folsom, it topped out at 25 miles an hour, and every time I stepped on the gas it got slower.

By the time I got to the parking lot by the theatre, I was nearly in tears.  Mate was standing by the entrance, his eyes wide.

"It didn't sound that bad last night," he said numbly.

"You heard me drive up, did you?" I asked, feeling surly.

"Well so did the rest of Folsom!" I snarled, and he winced.  He watched me find a parking spot--in front of his friends from work and his boss, mind you-- and pull in.

The car sputtered to a stop and coasted the last three feet.

After the movie (which, by the way, I really loved, in spite of its flaws and the way it strayed from canon) we went back out and faced the problem.

The problem was, the car was dead.  I'm pretty sure it threw a piston rod, which his bad.  It means you have to take the engine block apart in order to reattach the rod, and the cylinder is probably too damaged to compress the fuel-vapor mixture effectively, and it will have to be rebored.  There's probably damage to the camshaft and the timing gears too.

In short, the cost of repairing this engine is probably more than we could get for this car if we sold every workable piece of it on e-bay at top dollar.

And she died the week before Christmas.  Now, we had just enough money for Christmas and a little left over.  We weren't tapped out--but…

We don't have a down payment in the bank.  Not right now, after Disneyland and the new washer and Christmas.

And as much as I talk about maybe getting a big sedan instead of a minivan, the fact remains, we've got eight or nine more years of soccer ahead of us.  A minivan would be the smart choice at this point, because we'd get the same amount of use out of it as we got out of my poor, poor, dead companion of the last thirteen years.

Oh hell.  I wasn't going to get maudlin about the fucking car.  It wasn't our first new car.  It didn't even stay pristine for longer than two weeks after I got it.  (I practically peeled the door off a brand new car after two weeks of ownership.  Oi.)  It's been to Disneyland three times (so we didn't feel too bad for not taking it a fourth) and it was my buddy for the interminable trip down the I-80 corridor for nine of the years I worked a really painful job. We've had that car longer than two of my children, and the two older children have both practiced driving it.  We've camped in that car, when we were still camping, and we used to pull the seats out of the back at the drive-in theatre and watch the movie in style. As I got fatter, it expanded to accommodate me, and that should be mechanically impossible.  Yeah, sure, she's been looking a little weathered lately-- her last coat of paint/protective vinyl coating just came off in a big sheet the other day as I was driving, but I didn't think that meant anything permanent, you know?

But this… this is permanent.

And it would be one thing if we took it to the car lot and traded her in and had her all cleaned up and looking her best.  We could say, "It's been a good run. She's served us well, but we're ready to move on."  She'd get a wax job and a pedicure, and some kid with less money than sense would drive her for her last few thousand miles and that would be okay.

But now, she's just dead in the rain, her inside full of trash and my gym bag and the soccer chairs and the wheat thins that have lived under the seat since early summer when ZB got addicted to them.  It's just not right.

We're also a six person family with a car that seats five in a pinch, and that's not doing us much good either.

So there you go.  She's dead, Jim.  And all I can do is sit inside and watch it rain.

pieces of me said...

Oh Amy!
Only you would make me laugh and cry at once. Talk about bad- timing! I too would be embarrassed to make a grand entrance with my vehicle sounding like "Chitty- Chitty Bang, Bang". I hope one day you and mate will look back at this and laugh when the kids are grown and you're both old and grey. On the bight side January is in a couple weeks. Salesmen often try to end their month "big" ( to meet their sales goals). Pick a van that meets your needs and go to Truecar.com to see the average sale price for it. I also used beat the salesman to make sure I walked away with the deal I wanted. I'll attach that link below. I'm so sorry you guys are going through this. check out the this link. Or google beat the salesman. Good Luck! Anya http://beatthecarsalesman.com/school/how-to-negotiate-price-of-new-car.html

Once upon a time....all we could afford was a damn-near-dead used Ford Tempo that looked like it'd had seen better days BEFORE some metalhead kid got ahold of her...but the Dane loved her. He lovingly rebuilt her brakes down to the rotor, replaced her hoses when the Texas heat dessicated them to snakeskin thickness, and fed her transmission fluid like you'd give other vehicles gas.

For awhile she co-existed with a sleek beautiful Chrysler minivan, and then within a year of one another they both died. The Tempo's engine seized and then the Chrysler "lost it's mind" when the onboard computer-mind developed automotive Alzheimer's. Of course, neither died in a anonymous country back road. When you're so broke you can't pay attention and BOTH cars die...well...Putting good car mojo on the altar for you...and putting in a good word with the Big Guy in the Red Suit, too. Gentle Hugs!

*hugs* that soooo sucks! :/ ...timing wise & having to adjust to saying goodbye to the mechanical friend attached to so many family memories unexpectedly.
*stares out at rain in commiseration*

I'm writing a novel now in which the MC's car dies a final death in a town with a strong resemblance to Angel's Camp. But that leads him to love, eventually.

I hope your deceased vehicle gets you some kind of happy ending too.

I've owned a lot of old beater cars in my life and had to buy cheap ones most of the time. One of the best ones I owned, I bought at an auto auction for $500. It was an '87 Chevy Astro, and it was pretty rough looking, but it ran like a trouper. The passenger side front door wouldn't open from the outside, it had a big dent on the sliding door, and the inside looked like a pitbull had been turned loose and left for several hours to chew it up. I drove that thing for 5 years, and would have driven it longer but I was afraid I'd get trapped inside. Over the years I had it, the inside passenger door handle broke, the inside driver door handle quit working, the heater fan died, the windshield wiper gears stripped so they died, the whole muffler assembly from the catalytic converter on back fell off, and finally, the inside sliding door handle quit working. Do you know how hard it is to open a sliding door from the outside by trying to lean out the passenger window? Especially when you are the large economy sized person? The only door that still worked reliably was the back, and there was no handle on the inside. So I finally got rid of it. It was still running good at the time, though. ;-} To get to the point of this long-winded opus, maybe you can find an old beater for cheap at an auto auction to tide you over a few months until you can get a new one, and you will have it to trade in as well.