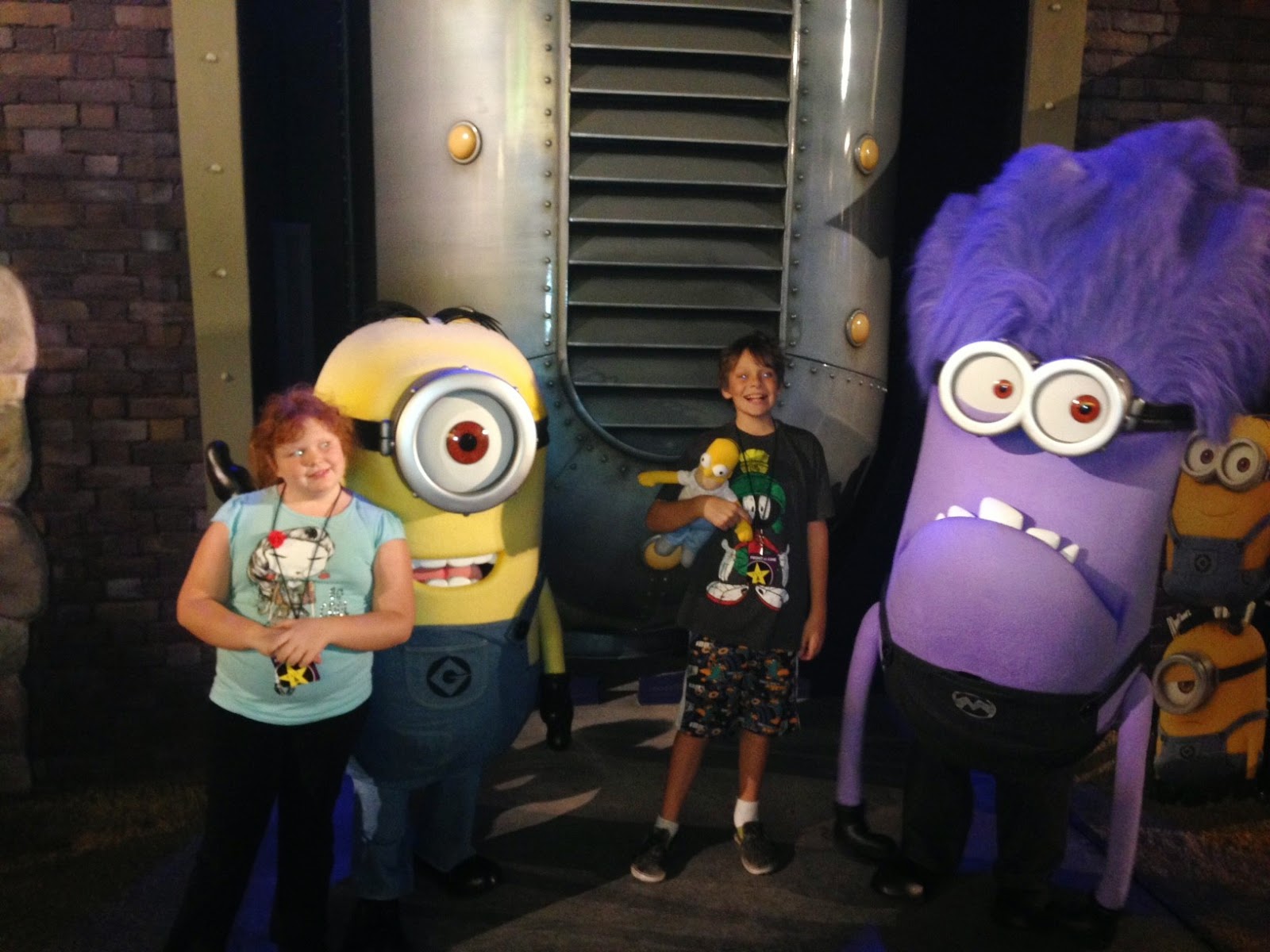 We told the kids before we left for the trip that they'd better enjoy Thanksgiving, because Christmas was going to be A. Thin, and B. Anticlimactic after eating dinner in Disneyland and coming home to a puppy.

They totally appreciated the warning.

And they totally appreciated the trip. 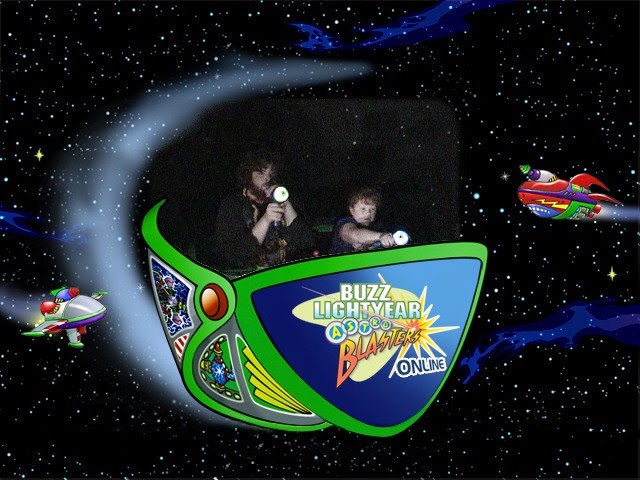 I'm not sure if I mentioned it, but Universal Studios was pretty funny.  See, the kids arrived in a game frame of mind--but highly dubious. 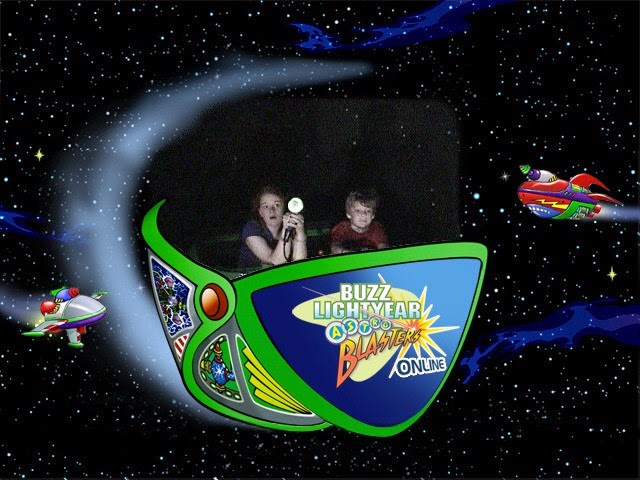 "Universal Studios. How exciting could this be? Are these going to be movies like Mom and Dad like? Jaws, Ocean's 11, The Italian Job, Super 8? Because we can see how that's Mom and Dad's cup of tea, but we, however, have a more discriminating palate that requires more roller coasters and special effects than boring old Mom & Dad!"

Boy, when they discovered everything from Despicable Me to The Simpsons to Jurassic Park, they were so excited.  The best part was the studio tour, which was great--not only because there was a lot of stuff Mate and I didn't remember, but because they had just watched Big Fat Liar which was filmed practically on the set.  It was like they bonded to Mate and I and our favorite hobby for real and for ever, right in that one ride.

That, and I almost wet myself when I found out that the episode of Castle I'd just seen had been filmed on the Wild West set. Seriously-- I totally did the happy dance.  Even made the tour guide crack a smile.

So anyway, they were all primed for Disneyland, and our first day was a success--but it was a crowded success.  Mate and I were afraid that Thanksgiving day, which would be the next day we went after picking the big kids up on Wednesday, would be too crowded for fun.

It was, in fact, just crowded enough.

Now, I admit it-- by Thanksgiving morning, I was, in fact, sort of burnt on crowds and noise and being on my feet.  I recognized the signs of imminent grumpiness if I got up and did the roller coaster trek Mate had meticulously planned.  I elected to stay at the hotel, sleep in, and, quite frankly, experience the joy of having my morning BM without worrying about five people pounding on the door.

By the time I got to the park, the kids were happy and ready for a brief rest, and Mate could get me a Fast Pass for Indiana Jones and I was ready to Disneyland again. I fully admit to doing the same thing the next night, when the older kids (who hadn't seen Fantasmic) insisted on closing the park down.  I had seen Fantasmic, we had closed down the park, and I would go back to the hotel and chill out.  I think maybe it's a sign of maturity (not the getting old kind) to know when I've had it.  Not just physically (although I'd been working on a training plan for Disney that had gone to hell in the past month, thank you pinched nerve and head cold very fuckin' much!) but also mentally. Mate thrives on that kind of thing, and I'm happy for 80% of it, but after that, I'm done. I'm starting to learn that if I say, "I'm done!" I have so much more fun for the parts I'm there for. Seriously. I'm a happier, better Mommy if I've had some quiet in my own head.

(I also confess that the more I write in the quiet of my house, the more of this I need.  I am grateful for my family which forces me to interact with the real world, or I could be a snarling old recluse in no time!)

But Disneyland was fun.  It was amazing fun. It was, "The big kids don't want to ditch mom and dad, they'd rather have their picture taken with Eyore" fun.  It was, "Let's play the Head's Up game in line to occupy ourselves and annoy the other people in line" fun. It was "Zoomboy and Chicken both want light sabers so they can fight!" fun, and "Chicken is afraid of ferris wheels?" fun.  It was, "Squish will keep up with the big kids if it kills her!" fun, and "Zoomboy will be a Jedi Knight!" fun.  It was "Mom wore the ears so she could match all the kids, even though her head was so big they looked hilarious!" fun.  It was, "Mate has mapped this thing like D-Day cause he's committed like you read about!" fun.

It was, "My family may be getting older, but their heart is still together," fun.

And then there was the death drive home.

The death drive was made longer by dropping Chicken off in San Diego and then turning around and driving back to Citrus Heights.  Many people have asked why we didn't just ship her back on a train, and the answer is that we needed to go fetch her rat, because she feels badly about shipping the rat off on other people.  Bon Bon is now happily ensconced where Spike used to be, and she seems to like daily cuddles just fine.

And speaking of daily cuddles…

So, the day we got back, you all may think we spent all day sleeping.

There were three things we absolutely needed to do.

Task the first: Pick out a new washing machine, because the old one, so help me, was scrap and destroying our garage. The whole place smells like toxic mold now because the water has been leaking from the damned thing for months, and it finally just… died. And here we were with all of our dirty clothes and a burning need to dress.

So, yeah. We got a washing machine that is smarter than we are, and our old, basic drier is sort of looking with the newer model he's stuck with and missing his battered old mate.  I've got nothing to tell him on this matter-- I think my Mate would miss me if I was replaced too, and no amount of bells and whistles would make him like the new model, but the least you could do was uses the bells and whistles.  (Oh God-- I've anthropomorphized my clothes drier. I'm stopping now, before I start to pity my dying car with too much maudlin sympathy.)

Anyway, task the second was to drop off the rental car.  *sniffle*  Oh, beautiful $50,000 minivan, we shall miss you.  You were a part of our family for a week, and we're spoiled for the video and sound system forever.

Was to get the puppy.

Yes, she's adorable.  She's tiny, but she's adorable.  Seriously-- when Big T was two years old, he sneezed and lost a booger that was bigger than this dog.  (Terrifyingly enough he had a big fight with his father over whether or not he was going to put that booger back where it came from.  T was never one for letting things go, trust me.)

We're calling her Geoffie, because we figure we'll have Gordie, Steve, Johnnie, and Geoff.  It's like our own little Office space staff, and she answers to Geoffie already.

She's a feisty little goober-- she's the kind of puppy that gets rolled over and wrestled with and jumps back into the fray, and if she'd been part of a normal family we would have called her Tuffy or Scruffy or Scamp.

At first we were terrified that she and Johnnie wouldn't get along. Johnnie looks fierce with his little snuggle tooth, and he's like a monster next to her.  But on the third day, something amazing happened. They played.  And not just played-- they ran around for an hour, until Johnnie jumped on my bed and curled up in the middle in a "Oh for fucks sake, mom, make her stop!" sort of gesture.

Ha ha-- not on his life.  He hasn't dumped the garbage once since her arrival.  He's too exhausted.

Not only that, but he's got company when we're gone.  They sleep in the same bed and gnaw on the same toys and run around the front room forever.

I am happy.  It was like adding children.  Every time we added one, I thought, "Oh no. What have I done?  My family balance was finally achieved!"  And then each child turned out to be the child we couldn't live without.  The same thing goes with Geoff.

And so's my family.