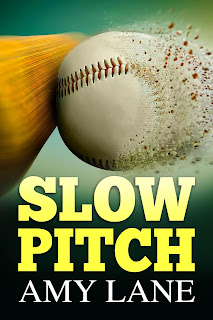 Tenner Gibson has a job he enjoys, a prickly ex-wife, and an adorable daughter he wouldn’t trade for the world. With no romance, no sex life, and no other hobbies, a rec league softball team is as close as he gets to hedonism.
But life throws him a curveball when cocky Ross McTierney sets his sights on getting under Tenner’s skin.
One explosion of lust later, Tenner wonders what possessed him to have a quickie with Ross, and Ross wonders how to do it again.
Tenner has eight weeks to convince his tiny modern family that Ross is what’s best for him.  Ross has eight weeks to get used to the idea that complicated doesn’t always mean bad. Their sex life is moving at the speed of light, and everything in their relationship is coming at them too fast….
But together, they might make a connection and knock it out of the park.

So I had this idea in my head, right? Two people from opposing teams giving each other shit and then nailing each other to the wall after the game?

It was so clear in my mind--when I started the book, I even called it Hatesex and Baseball--but my editors talked me out of it--and they were probably right to because that really does give the wrong impression of an Amy Lane book. But that instant spark, the instant fire, the instant connection--I REALLY wanted to capture that.

And then I wanted to capture the cockier of the two guys going, "Uhm... wait. I think I like you!"

And then to see what happens.

Because our first view of someone is often misleading, isn't it? We're like, "Oooh, pretty! Sexy! Want!" And then, in the course of interaction, we go, "Also human!" And then the deciding thought there is either, "Still want!" or, "Nevermind!"

So yes--in essence, it's a very simple story.

But it's also sooo easy to dive into.

It's snuggly. Its fluffy. There's a little hurt comfort in there--and I'd like to apologize for giving the two guys the plague because I wrote this in September and had no idea what was coming next. But I hope you like it.

The guys were... lovely. So lovely. Ross and Tenner were so much fun.