A Rollicking Night at the Lane Household... 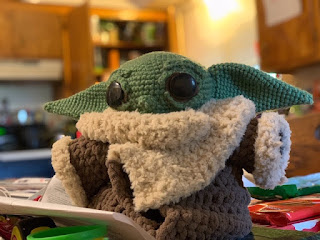 Do you like the stuffed animals? Chicken made them, and while the Baby Yoda is from a pattern (which was discontinued about a second and a half after I purchased it) the Trixie Matel Rainbow Cat was entirely her own design. We were super excited to see her finished product, and, well, crocheting has been keeping her sane.

She visited us yesterday and that was fantastic, but today was sort of blah. It was, in fact, s one of those days where you wake up with a headache and it doesn't go away until a nap and two more motrin. Not exciting, I know. That being said,  as I was sitting down to blog tonight, I realized that for a lot of us, what constituted major excitement anyway these days has changed.

So let's hear it for what now constitutes real firework moments in our nightly lives--from one kaboom (*) to 5!

They were replaying Jumanji all night, which is my husband's favorite modern movie-- * FIREWORKS! 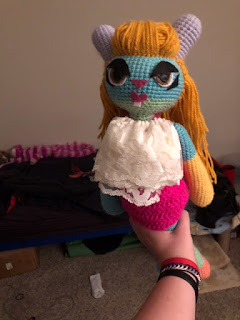 I have TWO new summer outfits, bought on sale on line, that I have not worn yet. * * * FIREWORKS!

My son took a SHOWER without a single adult commenting on his BO from across the room--* * * * FIREWORKS!

And finally, the topper in our 5* firework night-- We, as a family, managed to flea treat ALL FIVE OF THE QUADRUPEDS AT ONCE!  * * * * * HUZZAH! CELEBRATIONS ABOUND! WOOHOOOOOOOO!!!!!

And on that note, I leave you to celebrate your own small victories, including, I hope, being healthy and happy in your own (hopefully) flea-free abodes :-)