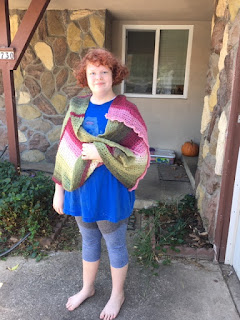 Last summer when I was in New York I visited my cousins. 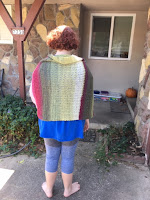 I adore my cousins--I see them rarely (as in once every ten years) and we suck at keeping in contact, but I am always so very excited to talk to them. Our fathers were sort of a trip, and it's wonderful to talk to people who understand.

Anyway, I came back from that trip determined to give them something--they'd given me hospitality and I wanted to return the favor.

What I ended up doing was--of course--yarn work. I wanted to make the women shawls. 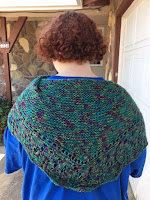 Now, once every ten years isn't enough to really know people--so I figured I'd make a variety of shawls, and send them ALL.

Then they could sort them out.

There's a variety here--four games of yarn chicken, only one (the dark purple and green one) that I lost.

One crocheted (the rose/green infinity one) and five knitted. 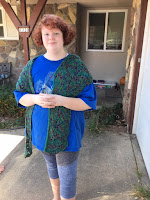 Three of the knitted shawls are the Oaklet pattern--free on Ravelry, but one of them I striped (nOT in the pattern) and one of them, I took the lace pattern that was used on the edge and carried it throughout the pattern. (Harder than it sounds.  There was maths involved. Scary, scary maths.) 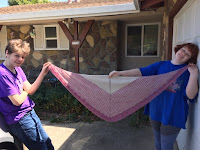 The dark green/purple one (the one where I lost yarn chicken on the I-Cord binding?) is done in Panda Pearl Silk Worsted. This yarn is SO discontinued that even yarns that were LIKE it were discontinued. I had to rifle the yarnchives to even find something close in COLOR. 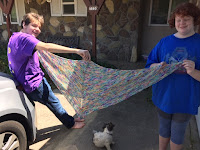 By the way, I'm making another version of that one--it's a Panda Pearl pattern, and I cut out the last four rows, which makes that loss in yarn chicken so much more bitter--so the new one is in a very basic mass produced super wash wool, in crimson. (Cascade 220. Ah, the classics.) Can I just say that every time I pick up the project I'm like, "Suck on THIS, yarn chicken!" because it doesn't matter how much more wool I use, there's SCADS of this and has been for at least fifteen years. 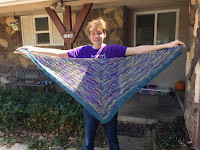 The two Oaklet shawls in the variegated color ways were done with yarn that was specialty made for the store in which I purchased it. I won yarn chicken by a matter of yards for those. (Dancing around your kitchen pumping your fists and going WOOHO! at two in the morning because you kicked the yarn chicken's ass is not something I can make my family understand.) 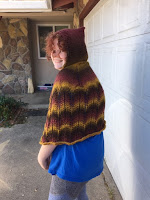 The crocheted infinity shawl and the knitted hooded poncho are my own pattern.

I think I had to list all of that because, well, I'm proud of it. My knitters and crocheters will understand what an undertaking it was--but very few others.

So, when I ask myself what I did over quarantine, I've got a book (I'm almost done with Fish 5) and this.