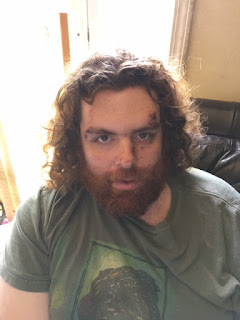 So first of all, thank you EVERYBODY for their good wishes. I mentioned on my Patreon that my son had been hurt on his way home from work last night--I was waiting for Mate to bring him home from the hospital and I wrote something to help me channel... well, everything, because yes. I was really freaked out.

I thought if I did it quietly, in a very small venue, only a few people--friendly people--would see, and it turns out that a lot more people saw it than I'd expected, and that they were ALL friendly and kind, so I felt like I should maybe give a better explanation of what happened.

My son--Big T--is a big guy. Late 20's, 6'5", 280, long curly hair hair, red beard, badly fitting clothes--you can see how he'd catch people's attention. He was getting home from work last night when a teenager who frequented the bus stop--and the nearby liquor store-- across from T's apartment thought T would be a good target. T doesn't do a lot of social talk--he has an auditory processing disorder, and he gets flustered.

The kid, being ignorant and cruel, basically tried "Hey, big guy, buy me some weed?"

T ignored him. He'd worked a ten hour shift that day. He bought his coffee drink, his chips, took his bag of work uniforms and left the store--and thought he was leaving the kid outside the store, posturing in front of the teenage girls  hurling taunts at T as he walked.

My son was seriously too busy, too tired, and had too much of a life to deal with their bullshit.

The kid didn't think so. He followed T and confronted him right when he got to his apartment parking lot. There was a rise in front of the driveway--the kid stood up on the rise to be tall enough to confront T, because, like I said, T's 6' 5". T basically said, "Look, I'm just walking home here. I don't want to fight anybody."

And the kid threw a punch.

T threw a punch back.

The kid was smaller, quicker, and stronger, and they fought for a bit. T broke away and in a fit of frustration, threw the iced coffee bottle he'd just purchased. It bounced off the kid--T's upper body strength isn't great. It's part of his overall disability--upper body, language centers, fine and gross motor control. It's one of those things that happens when a baby's brain is deprived of oxygen as the baby's being squeezed out.

The kid picked the iced coffee bottle and hurled it back, where it shattered over his head and the bridge of his nose.

When T came to, he called his sister, who came to help him deal with the police.

The police--being in their own way as cruel as his assailant--couldn't figure out why they couldn't understand him, and why he kept looking to his sister for help. Chicken stepped aside with one of them and told him that Big T couldn't UNDERSTAND WHAT THEY WERE SAYING when six people talked over each other. She told them about the auditory processing problem--and then added, "This man is the last person in the planet who would be high, I don't care how legal it is," and they backed off.

Then the firefighters got there and he was taken by EMTs to the nearest hospital where they gave him stitches in his head and his nose, and some ibuprofen. His father picked him up from the parking lot, and he came here, still smelling of coffee drink which had spilled all over his clothes. He took a shower,  called his girlfriend (she was visiting family) and went to sleep. (Squish gave up her new bed and went back to the bunk bed for a night, because she's good like that.)

He was okay this morning, for the most part. Ate, sat with his siblings, watched movies. Chicken brought donuts over, and we celebrated a quiet mother's day. I cooked dinner (We'd ordered takeout the night before, so Mate wouldn't have to feel bad about me cooking on Mother's day. Outback Steakhouse. Mmmmm... I'm a fan.)

And I was supremely grateful.

Yeah, there's fuckers out in the world who think keeping your head down and minding your own business is an excuse to throw punches--and God, they will come after your babies when you're least expecting it, won't they. But last night, my baby came home. Some cuts and bruises--and wounded pride, and puzzlement, because nobody expects that kind of evil in the world when they're keeping their head down and doing their best just to get through the day, right? But his heart is still good. He actually worried about the welfare of the kid who'd attacked him--thought the kid was bored and maybe neglected and hoped the kid found a different way. Thought the cops were pretty awful and wouldn't wish them on anybody. And thought the firemen and the EMTs were wonderful and wished they got paid more.

Yeah--my son's heart is still good. His body is still sound. And his girlfriend gets home tonight, and I know he was missing her so that's good too.

And my family is healthy. My children are safe. (God, I hope--I sort of thought they were safe last night, and boom!) And my stepmom sent me an adorable meme on the phone and my biomom survived a bladder infection and quarantine over Easter and hopefully got the package and card I sent her.

So I'm grateful. Happy Mother's Day to me--sometimes, the very basics in being okay is actually all you dare hope for, and it's more than enough.