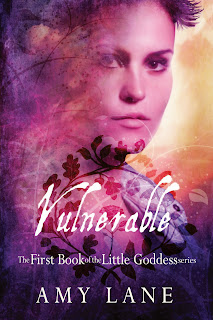 This is Vulnerable.  It's the first in the Little Goddess series. It was originally released over ten years ago, but DSP Publications has prettied her up and re-released her.  It is about a girl-- Corinne Carol-Anne Kirpatrick who realizes that she has power over her own life--and the right to as many lovers as she can handle.

(This was her original cover-- Mate took that picture, and I still maintain it wasn't bad for the two of us, screwing around, thinking nobody would want to read that book ever.) 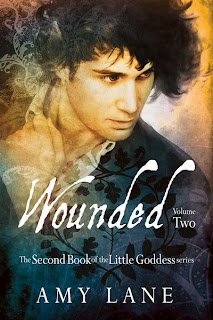 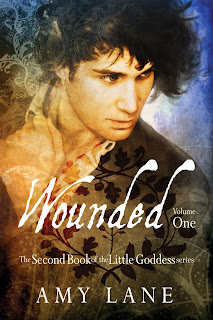 This is Wounded, Part 1 and Part 2.  Originally, Wounded was only out in one volume, but, as we re-did the editing for re-release, it became apparent that Wounded was a long fucking book.  We decided to split it up, because the press was geared for books less than 100K words, and that would help make it cost effective.  The sidhe (elf) on the front cover is Bracken. He's one of the first characters who ever charged into a book and said, "You! Author! Give me more lines! And a sex scene or three! And a really large cock!"  And then just brooded at me until I'd accomplished all of the above.

The original cover for Wounded was a picture of the I-80 corridor-- romantic, I know-- to show that the story was set in San Francisco, and that our girl-- born and raised in the California foothills-- was too far from home.  Wounded will be re-released in June and August. 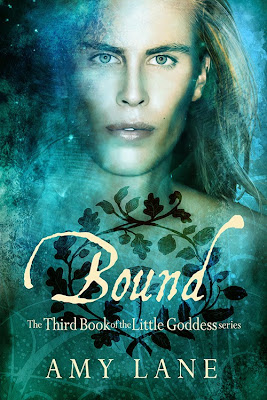 This is Bound, and it too will be split into two parts.

I don't have links for it yet-- it won't be re-released until December/January, but I wanted you to see it.  On the front is Green, one of my first "male nurturers" and one of the ones I'm the most proud of.  I didn't know where he came from then--I do now. He came from my father (to a small extent) but mostly from my Mate. He is by turns caring, strong, and, yes, exceptionally human. Green makes mistakes, for all his 1800 years. He frequently lets his heart rule his head.  And he's spent a very long time looking for someone to love.

His heart can only take so many disappointments.

And now he's bound to Cory-- and to her other lovers, including Bracken with the amazing Johnson.  But more than that, he's bound to their people, and they must always and forever be his first choice--and that's what we love about Green. He doesn't want it to be, but somebody has to take care of them. That's what makes him Green.

The original cover for Bound was a photo Mate took of the bridge at Forresthill.  For those of you who read Sidecar, this is the bridge that Casey had to cross--the one he thought about jumping off.  It's a double lane bridge-- each lane goes one way.  In it's own way, it's terrifying.

I really love this picture--and I love the bridge and all it represents.

But I love my cover of Green too.  If pressed to admit it, I love the new cover a little more, because Green is beautiful. 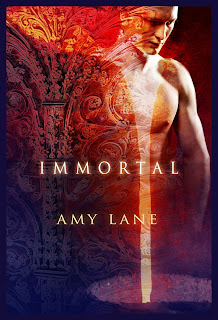 Thank you, Anne Cain, for your lovely work on my guys.  I can't wait to see what you do with Rampant!

And speaking of Anne Cain and her lovely artwork…

Immortal is now available for Pre-sale at

For those of you who fell in love with my fantasy first? Immortal is the story you've been waiting for.  For those of you who jumped on with my contemporary and haven't tasted my fantasy yet? I get dark in my fantasy, and raw and gritty and painful.  For those people who think that fantasy is all unicorns farting rainbows and bunnies burping daisies?  In my universe, the unicorns are skewering people with their horns and the bunnies are ripping heads off.

But the cover is very, very pretty… Thank you, Anne Cain, for all you've done to make my people beautiful!  I can't express my adoration enough :-)