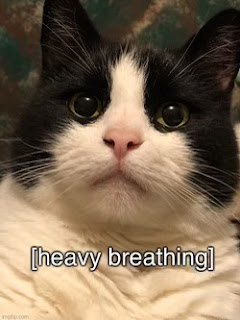 So I had a massive fasciitis flare up yesterday and I've spent pretty much all day stoned on Flexeril and Ibuprofen so let's see how coherent I am.

See, I know I promised to blog more, but I've discovered that when things get super intense, I get super quiet inside. It's like I can only deal with a little bit of something at a time, so I smile, get through the social sitch and then process everything later.

Unless shit is really bad, in which case I run for my room to cry, but that's something I try not to do a lot.

Anyway--so remember when it rained super much a lot? We were all pretty stoked that it happened, and still are--although we need it to do that about three more times, plus snowing in the Sierras for me to be comfortable showering every day. But when that happened, Chicken's apartment got flooded, and when the landlords came to assess the damage they found mold--that they sort of refused to remove or pay for. So Chicken's roommates decided to move--who can blame them?-- but they wanted to move out into their own apartment because they're a couple. Chicken can't afford her own apartment because fucking California rent, and as a result, asked to come home.

Her old room had been remodeled for Squish, so we said, "Sure--you don't have to pay us rent, but you have to do most of the remodel on what is now the storage room." She's in the middle of student teaching right now, but, well, Mate and I are in the middle of our own jobs which pay the mortgage on this crumbling piece of crap, so we knew it was going to be stressful but that was what we could manage.

The last two weeks have been her mad scramble to order her siblings around to clear out the room. She was super stressed thinking it wouldn't be done, and ignoring the fact that her father went in to work on it during the downtimes. Super small house, not a huge room--two people, maximum, can really get a handle on the work there. So she would get here and go, "OH!" And then stress out again because she had to be moved in by today.

She is moved in by today--thanks to a fairly herculean effort by almost everybody but me, because I mostly get in the way with jobs like that. My job was a little smaller--I had to get ready for Thanksgiving and then cook. We were having Chicken's roommates over, and my own dog walking buddies, and it was a large gathering for our mall, crowded house. I got it done--and even got some of the leftovers taken to my bio-mom the day afterward--but yesterday, my foot started cramping up. Being on my feet for three days, apparently, followed by a long stint of driving with not enough walkies. By last night, getting to the bathroom was super painful. Today, like I said, I spent the entire day stoned on Flexeril and Ibuprofen while my family and household changed shape around me, and my oldest, Big T, asked me why our family was like this?

I ran out of patient answers. I don't know why we're like this--why are our bathrooms falling apart, Big T? Your father was going to use his sabbatical to fix one of them, but he spent the whole time teaching you to drive. Why are our couches falling apart like they are? Well, you and your brother have been flopping your asses on them like trampolines for going on ten year now! Why do we have so much yarn?      Because buying the yarn keeps me from losing my shit about the house--yes, I'm aware it's a self defeating cycle, but when was the last time anybody offered to help dad with a house chore unless it benefitted you personally? And I realize this isn't entirely fair--mine and Mate's choices are our own, but  Squish has friends with much nicer houses too which I've heard about all week, and generally having your kids call you white trash is rough on the old self esteem.

I don't know what to tell them--or rather, I do, but what I want to say isn't polite. It's probably being in pain--and being on painkillers--because I can usually handle their criticism better than this. It might also be the worry that having one more person living here is going to change our dynamic for the worse. Or that our living room is so full of crap we can't fit a Christmas tree. I don't know--whatever it was, I know I didn't have a handle on my emotions or my ability to rein them in today.

Which is too bad.

Because I had a really nice Thanksgiving. All of that cooking was appreciated, both by Chicken's roommates, my family, and Bob and Sue. Bob is my dog walking buddy and Sue is his charming wife, and I have to tell you that when I talk about a full house, we had a six-Chihuahua Thanksgiving.  Chicken brought Carl, her roommate brought Guest-dog Gibbs, Bob brought Dude, and I had my own three to add to the mix and Thursday was raucous and delicious and fun. 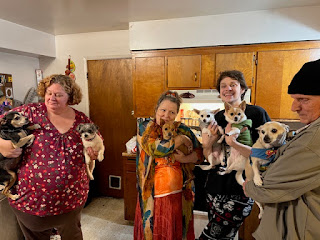 That wasn't the only part of the day that was great, either. At noon, we popped the turkey into the oven and then Mate, Zoomboy and I went up to my dad and stepmom's to visit with my stepbrother and stepsister, and while I see Casey a couple times a year, I do NOT see Todd--and it was really good to be in the same place with them on a holiday. I was so happy to get a chance to see them--and we got back to our house before the turkey was done, so I felt like a fantastic meal planner right there.

Friday, I took some leftovers--and a Chihuahua--to go see my bio-mom. Now, some of you are thinking,  "Why not Geoffie?" which is fair, because she's the cutest and the best behaved. But Ginger will bark at strangers--but not at friends. Geoffie will bark at friends because she sees the bork as sort of a "Hey, how are you?  Yeah? How's that going?" and she will bork at people as they are scratching her behind the ears because it's only polite to keep the conversation up. But Ginger, once you pick her up, as long as there's no other borking, will simply curl up in your lap and cuddle. 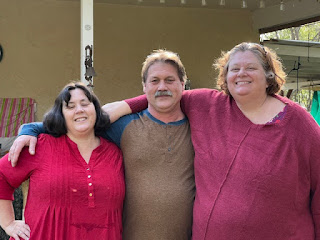 So that's all she had to do while I spoke to my biomom. And there I was, holding this neurotic dog who was looking around the picnic area skeptically when Ginger spotted her mortal enemy: a chicken. This dog--who is not too graceful anyway, because her legs are like way longer than her body did this tremendous SPLANG off the picnic table to get that damned chicken. She didn't, of course--I had her leash looped around my wrist because I try not to be stupid. Anyway--the moment was hilarious and I think Alexa enjoyed her pie, and, well, it was another good day.  We will not mention the moment when I got home and discovered that the room--which had been repainted this glorious "hushed rose" color that I adored had been "splattered" Jackson Pollack style with red in an attempt to be "ironic". I'll be honest--I cried. Foot was starting to hurt, I was tired and emotionally drained, and I hadn't expected the pretty room to be transformed into a murder room while I was gone. It through me. As an apology Chicken went and got some purple and some white and used that to splatter the room, and the effect was actually much better.

Also good was that yesterday we were able to tell Chicken to stay home and do homework while her father finished the floor in the room--and he did. It took him forever, but he had ZoomBoy to help and he should be proud of  the results.

So, yes--we're thankful. But there was also a lot going on there. I mean, a six-Chihuahua Thanksgiving and a murder room nervous breakdown would normally be their own headlines, right?

But with any luck--and a lot of ibuprofen--I should be able to walk by Tuesday and perhaps the world won't feel quite so out of control. And while I was laid up today, I managed to finish the last of three projects that I needed to photograph tomorrow so I can have a layout in the Sierra College Community Outreach education website--and I might also get to teach knitting and crochet and not just writing through them, so that's fun too!

And that also would have gotten its own headline.

See? This has been some week.

And I am still thankful. Taking deep breaths and counting to ten, but thankful. Remembering that it's every child's job to think their parents are idiots at least once in their lives, so still thankful. And grateful for heavy duty medication so I might be able to walk by Tuesday and, yes, still thankful.