The temperature today is: 108

I took the kids out to visit my grandma, and by the time we got home, we were both wrecked. Of course, part of that might have to do with getting to bed late because I'm writing, and waking up early because the two short people have taken to sleeping perpendicular to us. Mate woke me up with his patented "YAAAAARRRRGGHHHHHH!!!" and then went back to sleep after I got up and gave him more room.

And really--it's been us--hiding in the air conditioning, hoping the heat doesn't get in. I finally sent the short people out about five minutes ago (it's seven-thirty at night) so they can get exhausted enough to sleep tonight... but mostly, I feel like a you-tube video knit-tech sent me... uhm, Three guesses who's in it!

But I've been writing--uhm, have I been writing. I got all excited today after three pages of prose, and I was dancing up and down and trying to explain to mate how well it was going--"And then the vampires, they charge the good guys, and the good guys have a power shield and the Avians keep diving down to grab shit, and then Cory screams "get out of my way motherfuckers" and then...--and he just shook his head, pointed to my skull and said, "I get it, there's a lot going on up there."

*sigh * There is... but none of it makes sense until I get some peace and quiet--and that's not happening until it cools down enough to send the short people outside. oi!

But in cute kid moments? Cave Troll walked in yesterday with his hands up and bent at the elbows. "Guess what, Dad! I'm a cactus-boy!" *narf!*

And the big kids and I only have one more episode before we're caught up on Tru-blood. Am I going to hell for letting my teenagers watch this shit? Probably--but I've got a friend who's promised to bring a kiddie pool full of ice if I bring the tequila and limes. If I can sneak in a laptop, hell probably isn't a bad place, right?

In knitting news... uhm... still working on that vest for Mate--I want to finish it... but the alpaca in the heat? Even with the a/c, not such a good idea--I may have to stick to socks!

Which reminds me--I should probably update my Ravelry sometime this week--we'll see how it goes. I made something totally awesome for my T.A.-- in fact, (she says uncertainly) I may even find pictures...oops--wait. Wrong one! Too bad... I'll try again tomorrow! (hee hee hee hee) 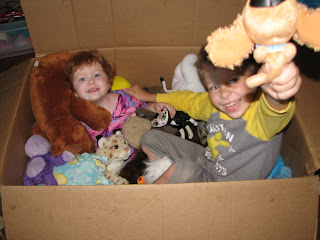 Yeah, it's meltingly hot here too:( And that box looks amazing

Come visit! We have temps in the low 80s and 0% humidity.

Oh, oh, I SO want to get into the next phase of the Cory-verse. I'm reading Twilight and it's so lame! OK, she writes well, but Bella is an air-head! Cory has worlds more smarts, guts and conscience. Time for re-readings I guess.

There too, huh? Guess summer's really starting all over. :-)
Keep on writing!
Samaya

You're mailing the kids off somewhere else cooler? Wouldn't it be easier to mail yourself off?

I'll swap - cold and rainy and grey here - sound like a great break and I love the pics!

I thought True Blood was a bit slow - I liked the books very much and persevered with the series, but wasn't sure about all the changes...

I do like Pushing Daisies though, because it is too silly for words - but mostly I've been getting into the Dresden Dolls - yay punk burlesque!

Yes, I'm hibernating from the heat too.

But you are writing! That makes me happy because I know we are getting closer!!

I liked the books buth haven't the heart to try the series (that and a lack of a television!). Charlaine Harris is a favorite and I hate to see favorites made into videos.

You are a writing fiend! Keep it up.