Seriously-- I've been clipping along at around 8 pages a night for the last week, and I went from 610 pages before I left to 675 pages as of right about now. I'm ROARING with the story now, and thrilled and happy to be doing it--and I've been worried. I forget, sometimes, how hard writing is. I remember my initial naughty girl joy at sneaking writing time in, and hee hee hee, isn't it fun, and nobody needs to know and...

Well, now, I'm feeling a reasonable amount of pressure to not suck, and that's an AWESOME thing, and also a hard thing. Writing is no longer cute and mysterious and arty--it's down and gritty hard work that I love with all my soul, but that, let's face it, has an end product that (and I can't say this too often,) NEEDS TO NOT SUCK.

I'm saying this to explain the massive amounts of Wincest I've written in the last six months. Because, you see, I CAN'T sell the Wincest fanfiction--it is, if nothing else, FUN TO WRITE. For the most part, there are very few people who will want to read this (if you're one of the few and the pervy, let me know, I'll send you the file, but remember--it's pervy and you can't judge me!) And I felt absolutely no pressure--no pressure to keep my world's consistent, to keep my voices consistent, to keep the level of emotional commitment consistent--just no pressure. Just writing. WRiting for sex, writing for angst, writing for the sheer stinking hell of it. Believe me when I tell you that Cory's latest installment would have been a whole hell of a lot more self-conscious if it hadn't been for the joy of just writing this secret little batch of crap for nothing than the fun of it. And now that RAMPANT is drawing to a close, I'm feeling very damned satisfied with what I've done. I feel like this was a well crafted story--I could be wrong, and I've got a LOT of hard editing to come, and you all know I'll need to be talked out of the crazy tree at LEAST six more times before this puppy comes out... but...

But I think it may not suck, and I think I put a lot of work into it not sucking, and I'm sort of damned proud of that.

"Can we play catch now?"

"Yeah!!!" And both of them ran to the television screen, where the absolute final credits--the part with a black screen and little pictures of robots were running around... and both kids ran up and tried to catch the robots running around the screen. I laughed my ass off.

And also in little kid news? I made the mistake of patting Ladybug on the keester and talking about her 'squishy bum'--the Cave Troll wanted me to tell him he had a 'squishy bum' too. Sadly, I could not. The bones in that kid's razor sharp ass could cut steel cable. I had to tell him he had a 'bony bum', and he must have pinched his own ass for half an hour, trying to reassure me it was squishy. For the record, this behavior does nothing to mitigate the impression made by the fact that all his shirts are too short and go up over his belly button and all his shorts fall to his hipbones. (My non-politically-correct daughter keeps telling me that he looks like we shop at Gay-Babies-R-us. I shouldn't laugh at this. I really shouldn't.)

And in knitting news? I really need to post these to Ravelry... but in the meantime... 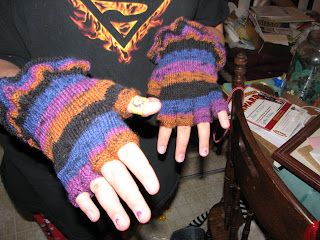 Writing for release is a valid way to spend your time. It lets all that excess creativity out into the atmosphere. I love the fact that my kids are grown adults and are wonderful women but when you write about the little ones, I miss having little ones around. They're always good for a laugh and a hug.

The mitts totally rock! Knitting those fingers is SUCH a pain, but so utterly worth it!

Sweetness, you could write a grocery list and it wouldn't completely suck as literature. YOu can't help but write well, and the way to write better is to write more, and that's what all the wincest was. Like Baryshnikov doing ten thousand plie's or some famous pianist doing hours and hours and hours of scales, you gotta put in the practice to make the perfect performance. Thank you, thank you for all your hours of practice! How wonderful that it was fun for you!!

Love the kid stories. Little boys are not supposed to have a squishy bum.

Snork @ Roxie - am now picturing 'Misha' being rather bewildered by Ms.Lane and Wincest... lol.

Those are soo cute! You really should post more cuteness.

Those stories aren't overly pervy. I'm about half way through them and really enjoying them.

We all agree it won't suck and appreciate your writing in all its permutations.

Whee! Does this mean I'll be editing soon (and getting to read the fun stuff first, or second, or third)? I only have eight weeks left of summer vacation.
Nice mitts.

Bet you five bucks it won't suck. Its just not possible :-P