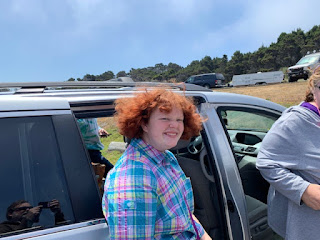 So it was a lovely vacation. It wasn't as busy as we usually are--and while the kids were sort of sad about that, I was thrilled. We drove to a couple of state parks-- Makerricher (sp), Russian Gulch, Glass Beach--and took the dogs on long walks, and even played in the sand for a little. 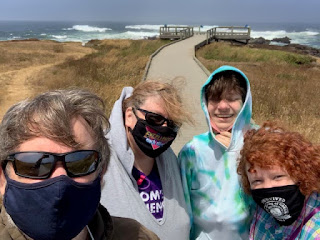 We rented a TINY HOUSE for four days--right off Noyo Harbor--as in, Squish took a video of a seal frolicking in the harbor from the back deck, and we could see water under the boards beneath the porch stairs. It was so small, the top loft was only about 4ft high--ZB sat up on a short-legged bed and had to be careful he didn't bang his head on the ceiling. The stairs were narrow, which was good because there was less room for him to hurt himself as he fell downtime, probably flailing as he went. 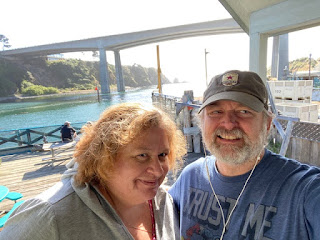 That was okay--it was bigger and more fun than a hotel room (and cuter too) and we got to keep the dogs. We also didn't eat out much because it had a tiny kitchen too! Wheee! 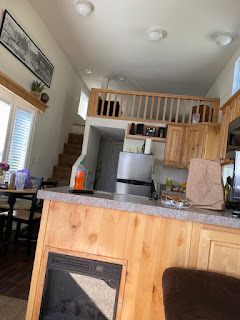 Mendocino is VERY big on masks--and most of the visitors respected that. When we were walking on the board paths that wind through Makerricher (sp) every family we ran into had their masks on--and so did we. I'm sure they have their own COVID spreaders--but for the most part, they're so isolated, and big hospitals are far away. They need to keep healthy and be good to each other, so they take their parts as good neighbors seriously.
Coming home was a comedy of errors though. 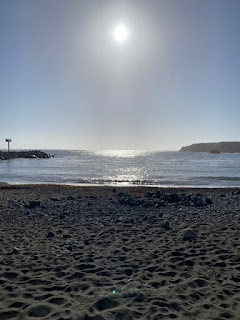 At first, we were going to stop and visit my friend, Karen. It turns out, Karen lives off the road from Cabin in the Woods, and the kids and I were wetting our pants. Then, it turns out, I had the wrong house number, and who wants to guess on the odds of calling or texting anyone with a cell phone when you're trying to find the Cabin in the Woods. Anyway-- we had to abort mission. The kids were legit asking us if we were planning to hide their bodies up there and I was getting car sick.
So was ZoomBoy.
So... about being car sick. And needing a bathroom on the road from Mendocino to what was GOING TO BE San Francisco.
A. There are very few bathrooms.
B. If you find a bathroom, you might need your own toilet paper.
C. If you find out you need your own toilet paper at the wrong time, remember, CELL PHONES DON'T WORK so you may have to holler to a random stranger in the next portajohn to please get your husband in the Honda Odyssey and have him bring the toilet paper. 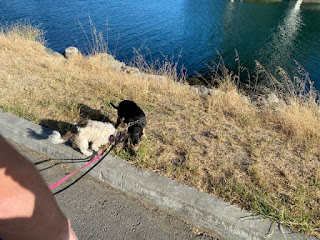 D. If you don't find a bathroom (and ZoomBoy couldn't wait) you might still need toilet paper.
E. If you happened to buy extra toilet paper because the tiny house you rented didn't have enough rolls, you may perhaps feel as if serendipity is on your side.
F. Your son may also still be trying to write a comedy routine about "does a boy shit in the woods?"
And now you know.
Anyway-- we were winding around the road and it was hot and we weren't seeing signs of civilization and Mate made an abrupt tactical decision and decided to take Mountain View Road to Williams, instead of driving all the way down to San Francisco. 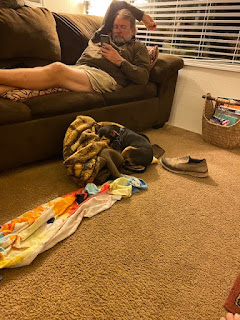 Now, I mentioned this to my friend--after we had bailed from trying to drive by and wave at her because her road is terrifying, and se said, "You think my road is bad, there's a road called Mountain View that's TRULY terrifying."
OH DEAR GOD.
It was like we were eternally stuck on Bob's Bogus Road-- between the aborted trip to the Cabin in the Woods to Mountain View "let's just drop the car off a side of a cliff because the road's not really there" Road, I have never--repeat NEVER--been so glad to see Hwy 5 in my life. So WHAT if it's straight as a ruler. So WHAT if there's a thousand semis on it. You know what? I'm not gonna upchuck on that road, and there is ALWAYS A FUCKING ROAD when you expect a FUCKING ROAD.
*pants a little*
So, uhm, that was fun. 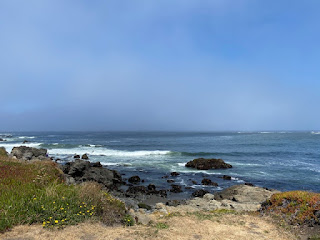 Anyway--
We got home.
We slept pretty much all of Saturday. Someone asked me for a chat, and honestly, I couldn't even brain words. Mate and I stared into space--we didn't even do laundry. Apparently Bob's Bogus Roads suck your soul out your eyeballs through a straw--and now you know. 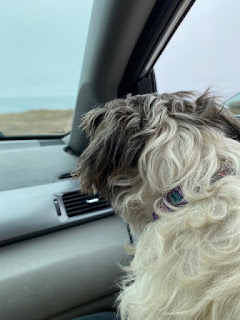 But other than the trip home, the rest of it was AWESOME. And even the trip home was an adventure. And given that, while we were gone, we had to deal with the news that the kids won't be returning to school in August except for distance learning (and that really sucks for both my kids, although we're super happy not to be sending them to their deaths like Betsy Devos wants us to) it seems like a vacation--even a tiny one--was well worth the price.