Shortbread and Shadows is Now Out! 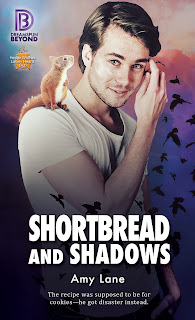 Shortbread and Shadows
by Amy Lane
I love paranormal romance and urban fantasy. (Yes, there's a difference--it's important, trust me.)
The first series I ever talked about on this blog was the Little Goddess series, and the second one was Bitter Moon--and I miss that touch of magic so much.
This book is paranormal romance--it's got a modern setting and just a dash of magic to make the world a little more mysterious than usual.
And to make love just a little less scary than it can be in real life.
There's a planned story arc here of four books--unlucky, I know, but I love every couple in the book, including Kate and Josh and Gabby and Chris, our two het couples. I've already finished book 2--Pentacles and Puppydogs, and I'm just... happy, with these books.
The real world right now is a big scary clusterfuck--I can't lie. And while I still believe that writing alternative universe fiction gives us the chance to say personal, telling things about human behavior--and I do that here, I promise--there is still that need to know that the world can somehow be set right again.
This series of books gives us that happy reassurance, and I'm not going to apologize for that. Escape for a couple of hours with the Hedge Witches Lonely Hearts Club--hopefully they'll cast a small spell on your heart for happiness we all deserve.
Blurb

When a coven of hedge witches casts a spell for their hearts’ desires, the world turns upside down.

Bartholomew Baker is afraid to hope for his heart’s true desire—the gregarious woodworker who sells his wares next to Bartholomew at the local craft fairs—so he writes the spell for his baking business to thrive and allow him to quit his office job. He’d rather pour his energy into emotionally gratifying pastry! But the magic won’t allow him to lie, even to himself, and the spellcasting has unexpected consequences.

For two years Lachlan has been flirting with Bartholomew, but the shy baker with the beautiful gray eyes runs away whenever their conversation turns personal. He’s about to give up hope… and then Bartholomew rushes into a convention in the midst of a spellcasting disaster of epic proportions.

Suddenly everybody wants a taste of Bartholomew’s baked goods—and Bartholomew himself. Lachlan gladly jumps on for the ride, enduring rioting crowds and supernatural birds for a chance with Bartholomew. Can Bartholomew overcome the shyness that has kept him from giving his heart to Lachlan?

Following is a list of places to either buy the book or review it after you've read it--if you have the time or inclination, a few nice words are SO appreciated :-)