The Cat is Infected by Satan 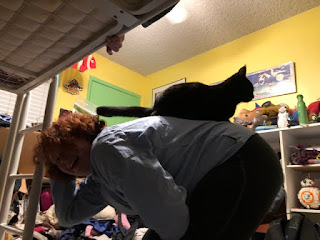 Yeah, so times are scary right now. We all know it. We're trying to hold on to our sense of humor and keep the kids from freaking out and losing their shit--and trying to remember that quarantine and  social distancing are temporary, and that--eventually--this will all be not so scary.

In the meantime, we are all--truly--okay.

None of us are showing any symptoms, and in spite of the fact that some of ZoomBoy's favorite activities have been postponed or canceled (the choir's trip to Disneyland hurt--I'm not gonna lie. We may not even get out downpayment back) they are mostly bearing up with good spirits.

This weekend was particularly strange. It was raining outside, and, well, we don't really do much on the weekends sometimes anyway. So, it was a rainy day weekend, and I'd gone shopping Thursday (before much of the madness) and we had lots of snacks and things people liked to eat and generally what was to worry about? I mean sure--the older kids had to snag some toilet paper rolls on their way out because they hadn't gotten to the store on Friday and now Safeway was out, but otherwise? Well, they ate every cookie in the house and two bags of potato chips but left most of the flavored coffee creamer so we'll call it good.

So I think that unless anything truly exciting (and frightening) happens, I'm going to keep the blog going with that certain humor we reserve to keep us from strangling the people we love the most while locked in a very small space with them.  I had to pull that sense of humor out today when, after we returned from our solitary walk in the rain with the dogs (the dogs were grateful to crap, but otherwise feeling very much affronted) Mate turned on the TV just as I got set to wash the dishes.

"I really really want to watch Frozen 2."  Our kids are too big to get excited about sequels--and they're old enough to read reviews and the reviews sucked. But Mate and I were sort of excited about this one, so, even though I'd planned to try to be productive...

You know, it wasn't bad.

I'd gotten up to go wash dishes afterwards, and while I was there...

Which is a favorite.

I sat down to watch it with him--we have sort of a rule that if we're watching something the other one loves, we don't mind if they stop household chores, so there's no nagging and no blame--and he... got up and washed dishes for me.

Which I can't really complain about. And I'm grateful for. But since I'd tried twice to do it, I'm going to argue it was dirty pool.

So that's it. ZoomBoy needs to make up his homework. Squish asked for art supplies. I confess, I may be staying up later and later and later just to find time alone to work. Walking the dogs is going to become a family exercise so that our arteries might not harden in the next two months. And we all recognize that the cat has been infected with Satan and we may have to avoid him as he bounces off the walls, the other cats, and our heads.

But I'm pretty sure we're not going to eat him, and I'm super sure we have enough supplies for the next week so we don't have to eat the children either.

All in all, we're doing okay.

And I'm hoping you all are doing the same.