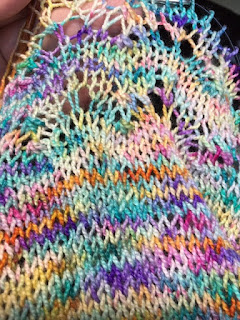 Kind of a weird day-- the power went off a couple of times, probably because the outside was super blowy, and the internet was down for a couple of hours. On top of the empty streets and the quiet cold of the dog park, we expected to see zombies at any moment. Fortunately not--no baseball bats at the ready.

Mate let me. Made me dinner (hey, it doesn't happen often, so I shall savor) and let me pick the movies  (Hitman's Bodyguard and Kung Fu Panda 2) and the kids have reached peak boredom. Apparently the power going off was the most exciting thing to happen to them in days. They were like, "Oooh... are you sure there's no zombies?" The upshot of this is that they leave us to our old people's movies and allow us to enjoy.

So I came within a movie of finishing this shawl.

It's an Oaklet shawl-- you can find it on Ravelry, and it's a pretty plain pattern down to the last border. In this case, I was (am!) sort of triumphant.

See, the original shawl is supposed to take up about 400 yards of sock-weight yarn, and I had 650 from an extra large skein. The pattern says you can increase the number of rows by multiples of eight, so I knitted sixteen extra rows, thinking I could capitalize on that extra 250 yards. And then I deliberated... eight more rows, or start the 21 row end game? Because the shawl increases from the top down, every row increases by four stitches--by the end, you're knitting a SUPER long row of nearly 350 stitches, so that last 250 yards was not going to last like I thought.

And sure enough, I quit then and started the endgame, and it might come down to the wire. (Yes, I know, knitters problems-- absolutely riveting!)  So tomorrow I'll probably show it blocking, and however much yarn I have left (not gonna be a lot) but today I've got a detail of the beginning lace work, and of course, the pretty pretty yarn.

Not sure what I"m going to do with this one. I give away most of my knitting, and I had a plan to knit all of my cousins something--I was going to do six wildly different shawls, and this would be part of that collection. I could give it to my son's girlfriend--she does love these colors but I started something different and a little sturdier for her. I could give it to my mom or stepmom--but it just doesn't seem like their thing.

A part of me wants to keep it, of course. The yarn is... to say it's soft is to say kittens are adorable. And the colors make me swoon.

But we'll see. My grandmother used to knit and crochet random things, and I just connected with my cousins again this year and I thought the box of shawls would be a super neat thing I could do to remind them they have cousins on the far side of the country.

I mean, I have three more shawls to finish (I have literally four started shawls in my UFO pile right now, and one I owe a friend from her birthday last year.) By the time I finish the whole box of shawls, I may just be in a place where I've seen it enough, peeking out of the box, and pet it wistfully, that I can part with it.