So last month I was worried about February because January sucked so hard--but you know something? February is the shortest month of the year--and there are some awesome things planned for this February, including a chance to teach next Saturday in Berkeley. So I am going to WOOT-WOOT! and celebrate this February-- it is the month of love, dammit, and I want everybody to get a Valentine's Day card, because I said so that's why.

And speaking of Valentines...

We have some adorable creations here.

First we have Powder and Pavlova, a BRAND NEW release from Jay Hogan, with an adorable "just a fling" premise. Definitely worth checking out! 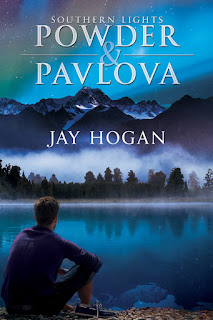 ETHAN SHARPE is living every young Kiwi’s dream—seeing the world for a couple of years while deciding what to do with his life. Then he gets a call.

Two days later he’s back in New Zealand. Six months later his mother is dead, his fifteen-year-old brother is going off the rails and the café he’s inherited is failing. His life is a hot mess and the last thing he needs is another complication—like the man who just walked into his café,
a much older…
sinfully hot…
EPIC complication.

TANNER CARPENTER’s time in Queenstown has an expiration date. He has a new branch of his business to get up and running, exorcise a few personal demons while he’s at it, and then head back to Auckland to get on with his life. He isn’t looking for a relationship especially with someone fifteen years his junior, but Ethan is gorgeous, troubled and in need of a friend. Tanner could be that for Ethan, right? He could brighten Ethan’s day for a while, help him out, maybe even offer some… stress relief, no strings attached.

It was a good plan, until it wasn’t.

Moving on, we have a spot of M-Preg, and what looks to be a sweet maiden-uncle sort of hero, with a love handles and a lot of love to give--let's hear it for Misha Paige and A Serpent's Bond!!! 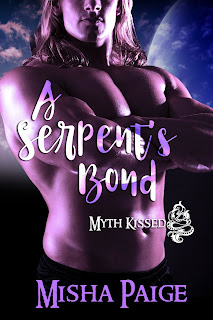 
A former foster kid, Hudson always had a simple dream for a perfect life. A husband to love and a family he could come home to every night. It wasn’t a fancy wish, but it might as well have been.

Approaching forty, he’s still single—and fighting the battle of the bulge—so his dream probably wasn’t going to happen. Not in this lifetime.

Especially not with Drakein Nacash, the drop dead gorgeous man who’s the subject of his nightly fantasies and barely even knows he exists.

In one day, his life is turned upside down and he’s introduced to a myth turned real. What if he could have everything he ever dreamed of?

And I have to admit--while most of my Kermit Flail books are sent to me, I have one here that I sort of, well, stole. Kilby asked me to participate in the promotional chat for this one, and it looked so awesome--and it's Kilby's first M/M book--so I wanted to give her a big welcome and a *muwah* from all of us in M/M land. Let's hear it for Kilby Blades and Adam Bomb--YAYAYAYAYAYAYAYAYAYAYAYAYAYAYAYAY!!!! 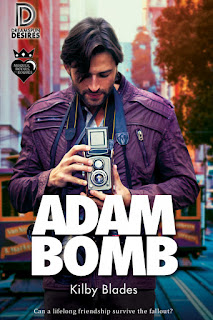 
Can a lifelong friendship survive the fallout?

Levi Cossio’s best friend Adam has always been larger than life: a smoking-hot billionaire hotelier whose charm can bend the world to his whim. When New York City stops being big enough for both of them—at least if Levi ever wants to fall out of love with Adam—he leaves it behind for a job in in San Francisco.

But when Adam pulls an Adam—upending the calm new life Levi has come to love with a plea to lend his talent to a worthy cause—Levi is helpless to resist. Adam will be the first Fortune 100 CEO to come out of the closet on a grand scale. He needs a trusted ally on his PR team. Levi is a lauded portrait photographer. And the job will only last three weeks.

Levi accepts on one hidden condition: he’ll keep his new friends away from Adam, certain that if they get a whiff, they, too, will fall under Adam’s spell. Bent on keeping his two lives separate, Levi barely makes it through the first two weeks unscathed—and then Adam drops another bomb….

And finally, I have my March release, which is sort of a crossover book--but MOSTLY a standalone with lots of cameos from some of your favorite people. It's called Shades of Henry, and it's about a soldier whose entire life detonated and his brother sets him up with the most unlikely of jobs. 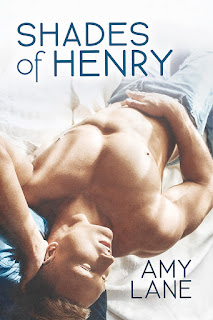 And a letter from management--

-I have to admit--I could SWEAR someone else sent in a Kermit Flail earlier on in the month. I know I was planning on three posts besides mine and Kilby's and I CAN'T FIND IT IN MY G-MAIL. So, if this was you--it's not because I don't like you or blew you off--please contact me and I'll edit this post and add you in. PLEASE contact me--I'm totally serious--because it's going to drive me NUTS until I remember who that was I was supposed to add. Also, I'm so sorry--I usually prefer if things run a little more smoothly than this. My incredibly embarrassed apologies. DON'T FORGET TO SEND THAT IN! Thank you. Amy
Posted by Amy Lane at 8:30 AM