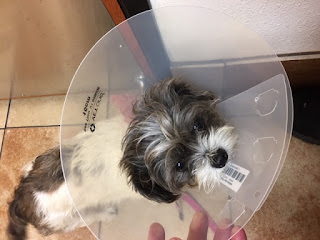 There's that moment in the Harry Potter movies, where Mrs. Macgonagal looks at Harry, Hermione and Ron and goes, "Why is it always you?"

Ron replies, "Believe me, Professor--we ask ourselves the same question."

If anyone is going to get sick, it's Geoffie. 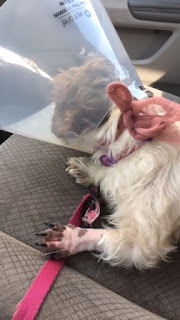 When she weighed three pounds she stepped on a fox tail, it penetrated her widdle foot, and she was the sorriest 3 lb. piece of fluff on the planet.

When she was two years old, I went away for the weekend and came back to her life-threatening eye infection.

A year later, I gave three dogs a big pork soup bone to gnaw on. One dog got a chunk of bone too big to digest in her teeny digestive track and almost died.

We have no idea.

It started out as a boo-boo, and then she chewed on it and it became an ouchie, and today she was three-legging it around the park and now she has a cone of shame and a goblin paw.

And she's been force fed pills and had icky stuff rubbed on her skin.

She is every bit the sad panda.

But she is, indisputably, ours.

Poor baby! Cone of shame is the worst :( Sending love and wags from me and my pup, Molly.