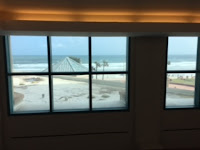 *  On Saturday, during the book signing, I got two text messages from Chicken.

1.  "There was a small fire in the kitchen today. The funniest part was looking at Dad as if to say, 'There, there is a fire. What now?'"

Given the information at hand, I'm glad to see that California is still standing after spending all Saturday naked and on fire. 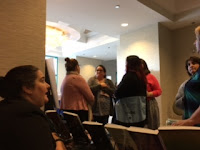 *  I had never been to the Charlotte airport before. As we were getting our stuff from the overhead bins, I told that to the lady next to me. She said, "Where are you going?"

"That's in the middle of the airport." 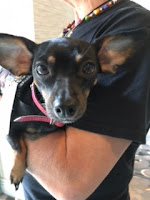 I made it with five minutes to spare, panting, blowing, and wishing for teleportation in the worst of ways. Damn, NC, well played. Like that whole bathroom thing wasn't bad enough, just running through your airport shoved me over the edge. I'm crossing you off my list of destinations, for life. 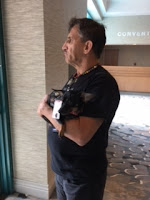 *  The Killing Game panel at Coastal was.... *shakes finger*  You know who you are!!!  All I have to say about that was, I sat on a panel with THREE PEOPLE who willingly admitted to offing between dozens 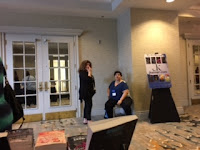 to WHOLE POPULATIONS. These people had destroyed worlds, y'all... and what was the topic of conversation?

One vampire, one housewife, and one damned horse.   *shakes head*  Nope. Never killing the horse again. 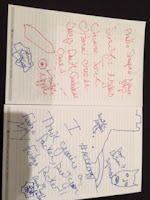 * The dog is Lacy-- she belongs to Randy and Mary Gresham. (I posted about them on FB and Twitter.)  When I am far from home and missing my dogs like crazy whoa, seeing Lacy and being allowed to stroke those amazing ears often makes the difference between having fun at a con and being just miserably homesick. Thanks Randy and Mary--mostly for being such kind people that your dog is that nice too. 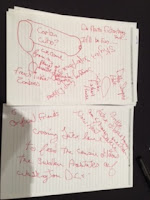 *  Speaking of dogs, my own dogs have been walked in the rain and fed bad, horrible, very tasty foods. I have recemented my identity with them as their favorite human, and they will follow me into hell, barking at the fuckers who scratch their pits on their own front lawns all the way. *happy sigh* Fucking wee potato shaped hounds. I missed them so.

*  I got publicly groped by the TSA in Daytona Beach. Like, my cooter and everything. I mean, yes, she gave me the option of going to a private room, but I said, "Whatever," because I was thinking, "I've done this before--how bad can it be?" 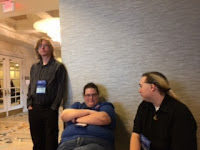 Well apparently it was "Touch the cooter through the skirt and panties" bad. I stood there with my arms out and a stoic expression on my face until she was done, but inside I was thinking, "Y'all... I think your machine is bonkers and this is insane."

Oh well-- I hope it was good for her, because next time I want lobster thermidor and a glass of wine before that shit goes down.


*  On my last business trip, I sat next to a woman who was very offended about the fat. My leg slid into her territory as I slept and she woke me up to see if maybe I could take a deep breath and hold it for three hours and try not to be so fat. She huffed, she rolled her eyes, she got upset if our shoulders touched. I almost wanted to sit on her "on accident" just so her worst nightmares of not being near a woman who wasn't a size two could be realized and she could hate all fat people with a passion for a REASON.

She was, for the record, blonde and blue eyed with a fake tan and a nose I don't think she was born with and boobs that were much perkier than the skin around her neck.

Last night, as I was nearing my bank of seats, I was appalled to see I sat in the middle. Holy crap, if there's a place you don't want to sit as the fat kid, it's in the middle where there is NO SPACE to move.

The young woman sitting on the end said, (with a California accent, y'all) "Oh-- would you like me to sit in the middle? You can have the end that way."  She smiled as she said it, and it was such a kind thing to do.

For the record, she was wearing a hijab.

Prejudices come from many places. The first people I ever met wearing that particular headdress were students of mine--funny, kind, wickedly smart, they made sure that my sympathies would be, forever and ever, solidly on their side.

I just think it's important to remember that most holy books, most philosophies, most people respected for their point of view and reason hundreds of years after their deaths, everyone from Jesus to Mohammed to Buddha, are very quick to point out that the quality of our culture can be judged by our kindness to strangers--or to the lowest strata of our own society. (Like, say, fat people, where skinniness is the watchword for beauty.)

While I was in Florida--often with zero bars to post, in case you were wondering-- my country was fighting its own government for the right to treat people kindly.  While I was afraid on the one hand (I was far from home and airports were being blocked by protestors) I was also proud.

We want to be the people who treat other cultures kindly.

Let's continue to strive to be that people. Let's not lose faith that we can be. Let's continue to fight. Yes, we lost the DeVos vote--by one person. And if she tries to give students guns to fight grizzly bears, I'm pulling my kids from school--but that was a close vote. We can't give up while we still have voices. I think we're beginning to be heard.

For the record, my literary Goddess......You killed Adrian, Grace, Sweetie and Comet. There are others, doubtless - because once you kill off one, murdering others is easier so they say. And you are correct, we can almost forgive you all of these save the HORSE. Ugly horses with a heart of gold are sacred. Perhaps more so than cows. Don't kill off cows, Amy. Especially those Valley Girl cows in the California cheese commercials....while they may need a healthy dose of laryngitis, death is not an option there.....Please, AMY!!! NOT the COWS!!!