Kermit Flail--February! (The Month of Love?)

Okay-- it feels like February is proof that we made it--not just to 2021 but to the year beyond. I mean, nobody imagined it was going to get better immediately and the fog would be lifted and we'd be all in unicorns and rainbows, right?

But it does seem to be incrementally better, so let's celebrate the increments here! It's February, and Valentines Day is coming, and it's a good time to read romance!

Kaje Harper, Andrew Grey, and RL Merrill have all sent in contributions this month, and I cannot think of better authors with which to celebrate Valentines Day! Also, the second book of the Hedge Witches Lonely Hearts Club is out this month, and while it's a few days after V-Day, it's also deliciously sweet and adorable--and that is some reading we can all get behind! 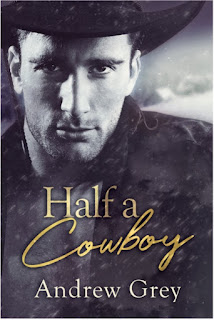 Ever since his discharge from the military, injured veteran Ashton Covert has been running his family ranch—and running himself into the ground to prove he still can.

Ben Malton knows about running too. When he takes refuge in Ashton’s barn after an accident in a Wyoming blizzard, he’s thinking only of survival and escaping his abusive criminal ex, Dallas.

Ashton has never met a responsibility he wouldn’t try to shoulder. When he finds Ben half-frozen, he takes it upon himself to help. But deadly trouble follows Ben wherever he goes. He needs to continue on, except it may already be too late.

Working together brings Ben and Ashton close, kindling fires not even the Wyoming winter can douse. Something about Ben makes Ashton feel whole again. But before they can ride into the sunset together, they need to put an end to Dallas’s threats. Ben can make a stand, with Ashton’s help—only it turns out the real danger could be much closer to home. 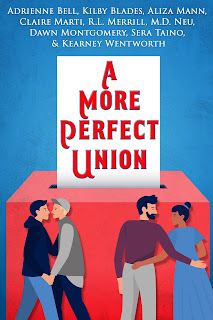 by Various Artists (RL Merrill and Kilby Blades among others!)

A More Perfect Union is a charity anthology written to celebrate our voices--in choosing our government and in choosing who we love. A number of bite-sized stories are gathered together, the proceeds of which go to benefit A Fair Fight, which is an organization dedicated to fight voter suppression! Come check it out! 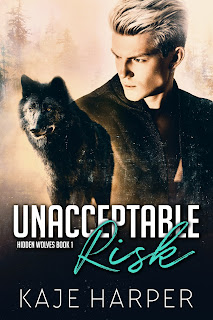 For a hidden shifter, falling in love with a man may be the death of them both.

Simon Conley knows about being an outcast. Born into a secret werewolf pack, he’s the lone gay wolf, an outsider even among his packmates. The top wolves consider him a perversion, a failure, and a security risk. To survive in the human world, werewolves rely on absolute secrecy, and any breaches of their code are dealt with swiftly— and violently.

So when Simon falls in love with Paul, a human man, even his Alpha's grudging tolerance won't protect him. He must keep Paul from discovering the truth about him and the secrets the pack jealously guards, or it’s not just their love that’ll end up dead. 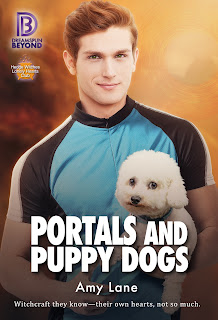 Sometimes love is flashier than magic.

But he’s also a witch.

Business powerhouse Simon goes for flash and glamour… most of the time. But something about Alex makes Simon wonder what’s underneath that sweet, gentle exterior.

Alex could probably dance around their attraction forever… if not for the spell gone wrong tearing apart his haunted cul-de-sac. When a portal through time and space swallows the dog he’s petsitting, only for the pampered pooch to appear in the next instant on Simon’s doorstep, Alex and Simon must confront not only the rogue magic trying to take over Alex’s coven, but the long-buried passion they’ve been harboring for each other.
Buy Here
Posted by Amy at 11:16 PM