Fitz and the Tantrums 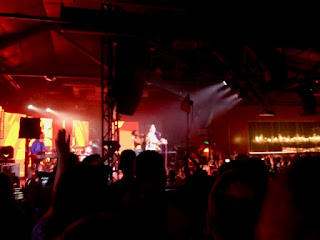 So-- very quick post tonight, just so you all know I'm alive.

Mate and I bought the tickets months ago--Fitz and the Tantrums--we'd seen them once in a festival, and fell in love. Not just the awesome melodies, but their stage persona is just stunning. (I've got a youtube video here, but it doesn't capture half of the band's charisma--Michael Fitzpatrick and Noelle Skaggs are incendiary!)

Anyway-- they were playing at Ace of Spades, which is a Sacramento institution, and we enjoyed every minute.

Two things about the performance--

One, Mate and I were standing very close, but the music was very loud, and I have to admit--  Fitz was doing it for me. Oh my God--rock stars are my candy, and he was SWEET to watch. So I leaned over and whispered in Mate's ear, "You know my laminated card with five names?"

"You know my laminated card with five guys I can have sex with?" I shouted back--just as the music died and they prepared for the next song. It wasn't loud enough for the whole place to hear me--but the people in our immediate circle all turned their heads.

I nodded and the next song started and now many strangers know I'm a total ho bag for a rock star. But Mate forgives me, so whatever.

And the second thing--at the end of the show, which blew everybody's mind, Fitz said, "Remember to treat each other with love, respect, humility and kindness. It's the only way to get through this world."

And I loved the music and I loved the band, but that just cemented the deal for me. I've heard a lot of people talk about kindness and then turn around and act like dicks--but this guy, in his art, in his music, in the way he talked about his band and the band they were touring with, was a class act--and so was Noelle, who was the soul of that band if Fitz was the heart.

So we may end up closing down the entire city for a while--the Kings game was cancelled as people were sitting down in the arena tonight. But I got to see that concert and it reminded me that there's still a lot of good in the world.

We could all use more of that.

We are lucky when we have Mates who understands us and loves us anyway.