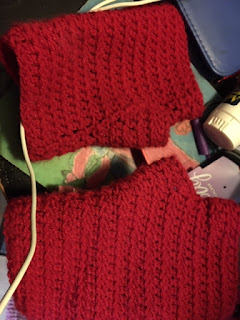 Christmas shopping with Mate is one of my favorite good things from a bad place to have happened in the last decade.

I used to be one of those crazy people waiting the day after Thanksgiving for the doors to Toys-R-Us to open, and I gotta tell you, we gave our kids a lot of useless plastic shit in those days. But when I got pulled from my job in the high school, I wasn't allowed to talk to any of my teaching friends, which meant my social circle just disappeared, in the span of a really shitty hour.

The buddy I went shopping with wasn't allowed to talk to me anymore.

And I was a mess.

I would fade in and out of conversations--my attention span was non-existent, and I would cry randomly, for no reason at all. At one point in time, we had to pay $300 to replace a key fob I'd left in one of my bags of yarn because we just could't fucking find it, and every time I wandered the house to look, I burst into tears.

So imagine that kind of wreck around Christmas. I'm pretty sure Mate was afraid to leave me alone, but I had Squish with me at the time and we sat around and watched a lOT of television when I wasn't writing. But send me into a crowd of people at the mall?

I don't think so.

So we started this tradition of the two of us taking a couple of days off to go shopping. And it's been a lot of fun. It's an excuse to do something together and to talk and to enjoy each other's company and to discuss our favorite topic--our kids--and to laugh at the weird things you can buy for the holidays.

It's something I've started to look forward to.

But this year was hard--for a number of reasons--including my foot which was swollen and aching as we walked. And while I wasn't bursting into tears a lot, I was wandering in and out of attention, and Christmas shopping isn't as much fun when you don't have the resources you normally do.

Still-- we had some fun moments. We found out from the guy at J.C. Penny's that people tended to walk in off the street and steal socks. Not packages, just one from the package. I helped a woman who was looking for a salesperson, and when I told her, "Now THAT would be a miracle," she smiled. And then she was really grateful when I told her that simulated down was usually hypoallergenic polyfil, and real down would probably make her sneeze.

And then there were the mitts.

See-- I had actually MADE MYSELF MITTS. I had two pairs. Two pairs of mitts--and I'm used to losing half a pair sometime during the season, but this year, given how distracted I am, I went big. Like MUCH bigger. I didn't just lose one mitt. I didn't even lose a pair, or half of one pair and half of another.

No, this year, I lost four fingerless mittens--two matching pairs--and apparently the gods have them because I have tossed the damned house.

So in the middle of Christmas crafting--and at this point I have a sweater to finish and two scarves to make--I had to take a time out last night and make myself another pair of fingerless mitts. Because my old creaky fingers get cold, that's why.

Why are they bright cherry red? Because for reasons known only to the gods--and they're feeling tricky this year, as you may have guessed-- I had one skein of this color--ONE--in my stash.

But I got to tell you, they sure did look Christmassy.

And they kept my old creaky fingers warm in the oh-my-god terrifying chill of the high-forties/low-fifties that was this day. (East coast people, stop laughing. Stop it I say. We know who we are here, and we are wimps.)

And amid the uncertainty and the zoom brain and the hopes for a better tomorrow and the extra work to make that happen, I have to say, this bright cherry red reminder that I can make something concrete and useful sure did make a difference in the tenor of my day.