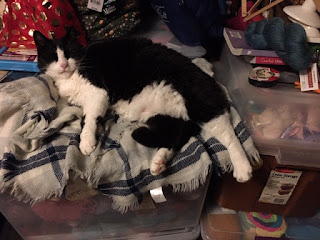 First of all, I'd like to thank everybody who's taken the time to review Clay and Dane's story in all the usual outlets--remember, creating buzz and reviewing a book are great ways of supporting your favorite authors.

Second of all, I'd like to have a word about Steve.

You may see her, pictured here, lounging among the yarn boxes.

Do not be fooled.

That blanket she's on used to belong to Squish. I reorganized my yarn and ZoomBoy put it on top of the boxes as a decorative thing and Steve... made it hers.

As in, last night, it had slid to the floor, and instead of sleeping on that big glorious patch of open box, she slept ON THE YARN I WAS KNITTING FROM until we fixed her spot back.

If the bathroom door is locked while I'm using it, she scratches at it until I open it. If I leave it partially closed, she bursts through it like the Kool-Aid man--like, rears up on her back paws, gets some momentum with her upper body, and CRASHES the door.

She's been known to take a running jump onto the bed to face bump me into petting her.

She's been known to head-bump my boobs repeatedly at three in the morning, because, you know, attention.

If she's sleeping on the cat bed (notice, there ARE cat beds in the house that do not involve yarn, projects we are working on, other people's blankets, or the back of the couch) that sits in front of the pet door, the dogs will look at her and whine until somebody gets her out of the way. They just don't trust her to let them out unmolested.

She is unbullyable when still--however, she does not run that fast, so the dogs CAN bully her if the catch her moving. To counteract this, she stays still as often as possible.

I usually turn and dump her on top of the couch, and she's started settling down immediately, as though this were her plan all along, but she needed the airlift to make it happen.

If we run low on food, she will reach out a casual paw and delicately claw your leg until you get your lazy ass up and get her some.

When she's on an affection high, she stretches her paws out in front of her while I scratch her ruff. I think she really believes she can fly.

When I used to take walks at night (when I moved faster and with more confidence and was not quite as terrified of my neighborhood) she would follow me for a two block radius, keeping to the shadows by the houses while I used the sidewalk. I don't think she quite trusted the dogs.

She bets for attention no less than twice a day. I think she feels under appreciated.

I have had some memorable cats in my time, but Steve is perhaps the smartest I've ever loved.

I think she feels as though I am her favorite human. We got her in 2010 I think?

Steve and the dogs are three of the favorite things I've done this decade.