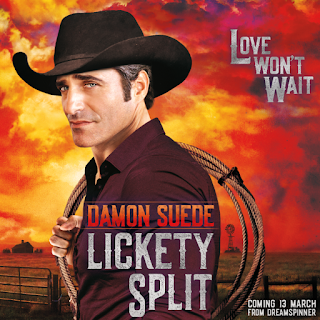 A few weeks ago, I interviewed Damon Suede about his new book, Lickety Split-- the full review can be found HERE at Prism Book Alliance. Now, because I'm me--and because he's Damon-- we sort of spilled over the word count, and there were a few more things to say. I'm blessed, because Damon let me post them on my blog.
So without any further ado, I bring you a few deleted scenes from our earlier interview:

So, Damon--Tucker was a sexy hunk of sand-paper-palmed, swaggering, lusty cowboy--who didn’t actually think of himself as “gay” or “bi” or any of the sexuality labels currently used. Do you think there are a lot of “Tuckers” out there? Guys who don’t mind doing “stuff” as long as it’s consenting adults but who don’t actually have the words to articulate what they’re doing? (I have a theory about this, about how language sometimes hinders the full realization of our own identities, but it’s long winded and boring.)
One of the persistent myths and pop culture is that small towns are more conservative than big cities. Sometimes that's true, but you'd be surprised. Countryfolk are practical in ways that can peel paint and wake snakes. LOL There's a reason rural areas thrive on gossip and scandal. Folks out in the sticks get bored, so fighting and fucking become a kind of live-action Opera that everyone can afford to watch and anyone can take part in.

In a very real sense, that kind of rough edge, homegrown sexiness is the seed from which this whole book grew. That shit's hot, yo. I'd much rather read about people connecting in unexpected and fascinating ways and waste time on greasy, waxed bodybuilders standing around in unscuffed boots pretending to be cowboys. Real emotion is really moving and I'd always rather get inside if I can, to split the piñata and knock the candy all over the floor where we can get at it. Lickety Split needed that grit to work the way I wanted it to.
Tucker’s horse, Nugget-- I have to admit, as much as I admire horses and horsemen and women, I was sort of the victim of an equine vendetta as a child. Tucker loved that animal. How do you feel about horses? Love? Hate? Admire from afar? Would you write a scene with Patch and Tucker riding together if you had time?
I’d totally write Patch and Tucker riding together, but for this book, with all the other threads taking the time just didn’t feel relevant or right. When I decided I wanted to write a cowboy book obviously the first thing I thought was, "Well, what about the damn horses?" I didn't want to write a book set on ranch; it felt wrong for these characters and for that part of Texas besides. The farm needed to raise hay for so many reasons, but I knew Tucker would keep his old mare close by. Nugget was the name of my quarter horse growing up and she had been trained to cut cattle... You could turn her like a car, like a knife. She was amazing, light chestnut with a white blaze and sweet as butter. And so I gave her to Tucker because I knew he take care of her.

I grew up riding. My family raised Tennessee walkers and quarter horses. They went to shows, rodeos, and auctions all the time. It's not really my scene, or at least it wasn't after I hit puberty and I started working in show business pretty regularly, but I love to ride and the smell of hay and horseshit still seems wholesome to me in a funny way that takes me back to the ranch.

Actually Botchy, the battlescarred pitbull, is also real and from our ranch. She’s a big slobbery sweetheart who really does climb up on roofs and patrol the property like a jolly bandit. Champagne coat and pink scars that don’t seem to bug her in the least. Again, I knew Tucker would know how to take care of her.

I have to admit, I fell in love with Botchy. I’ve made out with pitbulls before, and they’ve always been attentive and kind and have never let me feel like I was being used in the least. Botchy was the kind of dog who would break fancy vases with her tail--I adored her as a character.
Speaking of amazing supporting characters, tell me about Janet. She was a wonderful supporting character--a “haven” character, a “sage”-- Is she based on someone you know or is she based on someone you think every young person should have in their life? (Or is she a person needed for the narrative--and that’s a perfectly legitimate answer too.)

Well, Janet Rodman is very much real and very much one of my favorite people in Romancelandia. She's smart and sassy and hilarious as I wrote her, and if even half of her charisma comes across I consider myself fortunate. Part of Patch's homecoming had to be about his iffy memories. Not everyone is evil, even when it seems so. I knew that there are allies in every community and I wanted him to have a safe space. A teacher, a raucous irreverent teacher seemed like the ideal person to extend a hand to a kid that trapped by his surroundings. Janet was a teacher for many many years and she has an uncanny ability to cut through BS with her wit and warmth. When I first mentioned I was thinking about making her a secondary character in a book she had only one thing to say, "It better be fucking dirty." And it is.

The truth is when I first thought of including her I had no idea how pivotal she would become to the course of the story and how much the real Janet would inspire the lady on the page. The fictional Janet was me trying to capture the real Janet for everyone who's never met her. Ironically, she only read the book after it was finished, but between you me and the rest of the world, I feel like all I did was give her an East Texas accent.

I have actually met Janet Rodman, and she's wonderful. You did her proud--I'm so tickled to know this!   Thanks so much for stopping by, Mr. Suede--as always, it's been a pleasure.

Bio: Damon Suede grew up out-n-proud deep in the anus of right-wing America, and escaped as soon as it was legal. Though new to romance fiction, Damon has been writing for print, stage, and screen for two decades. He’s won some awards, but counts his blessings more often: his amazing friends, his demented family, his beautiful husband, his loyal fans, and his silly, stern, seductive Muse who keeps whispering in his ear, year after year. Get in touch with him at DamonSuede.com.

Social Media channels:
BLURB:
Lickety Split: love won't wait.
Patch Hastle grew up in a hurry, ditching East Texas for NYC to make his name as a DJ and model without ever looking back. When his parents die unexpectedly, he heads home to unload the family farm ASAP and skedaddle. Except the will left Patch’s worst enemy in charge: his father’s handsome best friend who made his high school years hell.
Tucker Biggs is going nowhere. Twenty years past his rodeo days, he’s put down roots as the caretaker of the Hastle farm. He knows his buddy’s smartass son still hates his guts, but when Patch shows up growed-up, looking like sin in tight denim, Tucker turns his homecoming into a lesson about old dogs and new kinks.


Patch and Tucker fool around, but they can’t fool themselves. Once the farm’s sold, they mean to call it quits and head off to separate sunsets. With the clock ticking, the city slicker and his down-home hick get roped into each other’s life. If they’re gonna last longer than spit on a griddle, they better figure out what matters—fast.