Honestly, I've only ever seen a monologue from the play Zooman and the Sign by Charles Fuller, but the minute I started calling Thing 3 "Zoomboy", that title has been going through my head. 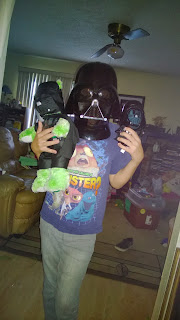 If you've been around awhile, you remember when we called Zoomboy, "The Cave Troll" instead.  See, when he was first born, Mate and I knew we were hopelessly outnumbered as it was.  And then Zoomboy started showing his rather peculiar type of manic intelligence, and suddenly this kid seemed like overkill.  Abruptly, we were Boromir and Aragorn in Lord of the Rings: The Fellowship of the Ring, and there was this tremendous force of nature about ready to squash us flat.

"They have a cave troll," Boromir said to Aragorn.

Aragorn's smile was correspondingly arch.  Overkill.  Madness.  They were going to die anyway, and the enemy has a cave troll?

Well, Boromir and Aragorn had to kill their cave troll.

We simply enacted a ten year campaign to make him one of us.

And he is!  He is the geekiest, brainiest Little Lane-ette we have ever turned out.  He loves Star Wars, Monkeys (primates!), Diary of a Wimpy Kid, reading almost anything, and Legos.  He never makes eye contact while he's absorbing information, doesn't say a lot when you ask his opinion, and is devastated if you don't get his jokes.  He refuses to declare whom he's crushing on (and I think he teases me about being gay because he knows he's my last best hope) and he's finally caught on that soccer is social hour, even if he's only partially sure what to do with the ball.  He does his homework every night, never turns it in, and, I'm sure, makes his teacher bug nuts crazy because he aces all his tests.

Every morning as he's getting out of the minivan, he gives me a hug and says, "I love you."  Then he turns to the dog and pats it.  "You, not so much."

It's his ritual, and I treasure it. 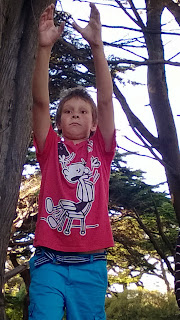 In spite of the fact that I drop him off on time, he is perpetually late for class.  His first grade teacher told me that she'd say he had an attention deficit, but that would imply he had any attention at all.  She also said she adored him, and wanted more of him.  I think she was kidding about that.

His second grade teacher said exactly what the first grade teacher said, but added (in an embarrassed whisper) that he seemed to play with himself a lot.  It seems this is a thing that ADHD kids do-- they get bored, and, well, it's portable, it's easy to play with, and it can be a hell of a lot of fun.

We got him on his meds, and his third grade teacher repeated what the first two teachers said, but Thank God, he'd stopped playing with himself.

His fourth grade teacher said he was awesome, and he got lots of great certificates.

And the entire time, his entire academic career, not one teacher has doubted that he's going to do great things. 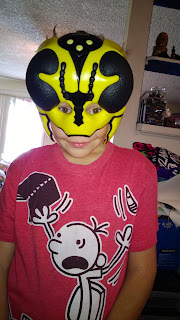 When he was born, he spent an extra five days in the hospital after we left, because his blood sugar dropped and he almost died. It feels as though I have spent his entire life feeling my feet on a rocking boat, making sure I never take his persnickety, particular, ADHD presence for granted.  He's not your usual boy, our Zoomboy.  He's not average, or easy, or laid back.  He's intense and wall-bouncy and brilliant.

And kind, and funny,

Happy Birthday, Zoomboy.  It's been ten rollicking, unpredictable, amazing years.  You're still overkill.  We still love you.  We can't wait to see who you become.

And this pic is for my knitters out there (Roxie, Donna Lee, Knittech, and Samurai) I thought I'd show you that I haven't forgotten you, and that I still keep the faith and knit, and that I treasure every comment you make, even if I don't show up on your pages as much as I'd like to.  This is a pair of worsted weight baby socks, that go with a matching hat-- that I'm going to have to finish up tonight, as well as another pair to go with a contrasting hat, to go to a mom from ZB's soccer team who is having twins. 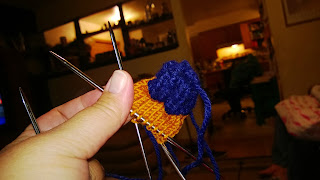 And this sort of stoked my fire-- that's the RT Book Reviews magazine that features the article about the Riptide Christmas Bundle.  So, yes.  I'm in there!  And there it is on the shelf of Barnes & Noble. And yes.  I bought a copy.  Seriously-- wouldn't you? 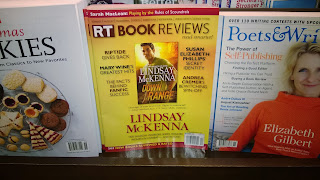 Happy 10th Birthday, Zoomboy!! You are a delight to hear about! Your mama is SO proud of you. I love reading her stories about you and your brother and sisters. You are AWESOME, dude!

Happy birthday to the Zoomboy!

I can't believe Zoomboy is already 10! When did that happen?

He truly is going to do amazing things in the world (if you survive his teens :-)

My oldest daughter (who has ADD)'s teacher said "I can't teach her, she is always 2 steps ahead of the rest of the group". I think some people glide through the world and some hack their way through with a machete making people take notice and changing things in their wake. They challenge us to be better parents and then they grow up to be amazing adults.
Happy Happy Birthday Zboy!

PS: Pretty colors on the socks!