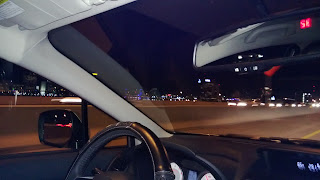 Okay.  I know what you're thinking.

You're thinking that getting an invasive pat down in an airport because one's maxipad apparently looked threatening on airport security X-Rays pretty much levels out the weirdness scales of bad travel stories, right?

I thought so too.

Of course, when I sat next to Michael from Mourning Heaven (minus the gay, more's the pity, cause he was terribly terribly cute, but probably also minus the tragic backstory, so Godspeed young soldier) I thought that was pretty cool.  Weird-- because, seriously, a town in Humboldt County with a population of less than forty was so very close to the scenario I'd painted that it gave me the shivers-- but, you know, considering I couldn't even make American Airlines cough up a seat reservation until the last fucking gasp, it felt like serendipity.  I was SUPPOSED to sit next to the fuselage and be confronted with the real person who represented the specter of the young character I'd completely fubared and killed off in fiction.

Anyway, my fictional real person disembarked, and I sat in Dallas thinking that, just once, I'd like to see the real Dallas and not the airport version, and then I was bound for Jacksonville.

Jacksonville has a very pretty skyline at night.

It's one of the few things I know.

There are some other things I know.

I am not a person of instant action.

I am very much aware of that.


But see, there's this joke, a kid's joke, about two lion hunters.

Bob says to Bill, "Bill, I want you to go down to the bottom of that rise, and I'll flush out the lions.  When they run by, shoot them!  But you can't move.  No matter what you do, DON'T MOVE."

Bill says, "Okay.  I promise upon my honor I shall not move."

Bob does his part, and after he risks life and limb, there is NO ONE to shoot the lions he scares into the clearing.

After a few moments, Bill comes running out, screaming.

And Bill says, "Okay, I know, I promised.  But when the pterodactyl came out of the jungle and made a nest in my hair, I stayed.  And when the gorilla came out and started throwing me against a tree like a basketball, I stayed.  But when two squirrels ran up my leg and said, 'Should we eat em here or take em home--I RAN!"

So, two very nice girls-- let's call them Shannon and Amy (because seriously, those were their names)-- once visited a castle by the sea.  And they were told, "You will stay at this castle and meet and greet people and enjoy, and our only request is that you stay AT THIS CASTLE."

And Shannon and Amy said, "FRICKIN' GROOVY!"  Cause they were easy that way, and a castle by the sea sounded like a good deal.

But at two o'clock in the morning, the two girls drove a Subaru Imprezza screaming from the one castle to a near by Regency Inn castle, and threw themselves upon the mercy of the kind night clerk so that they might stay the night at the Regency Inn castle.

And the other people around them asked, "But girls, what are you doing?  We told you not to move!" 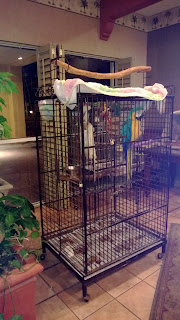 So, as this story can illustrate, cockroaches and spooge stains in a hotel room CAN spur Amy to instant action.

And did I mention the birds?

See, I should have known it was going to be interesting when we checked in and the foyer was balls to the walls bird cages.  Not hygienic bird cages, either.  Just... just... lots of parrots and parakeets.

And now those birds are all alone by in the castle by the sea, because Shannon and Amy got the motherfuckinghell out of there before the cockroaches could make off with their computer equipment and psychosomatic itching could reduce both girls to sad and scratchy mess on a dirty rug.

Like I said, you'd think the invasive pat down because of the maxipad shadow on the X-ray was bad enough.

Apparently, not in castle by the sea.
Posted by Amy Lane at 12:18 AM

I think that was a wise move on your part. I'm feeling a bit twitchy now.....

Glad you got out of there!