The Dance of the Hours 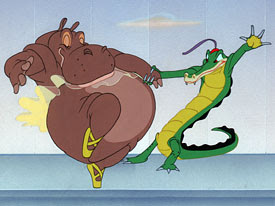 So, we lived through Saturday.

It was tough-- it got to be a-hundred-gazillion-wasumba degrees on Saturday, and, well, that sort of sucketh right there.  But the kids got up on stage and the danced their hearts out--even Chicken, who was fading fast in the end.

Chicken actually had a very funny moment, speaking of fading fast.  The thing is, Chicken (like most of the people there) was only on stage for a couple of numbers.  A long adult jazz medley, and her own senior solo plus the senior dance.  But Chicken--being  helpful Chicken--made her self supremely useful and sort of adopted moving the little kids from spot A to spot B as the the recital went on.  That was her job.

Anyway, the night before the recital, she asked me if she was going to get a jacket--it's tradition.  Graduates get a red jacket, with their name on it.  (In her case, her jacket had "Sunshine" on it--she was called that because she never smiled.)  I told her, "Yeah, probably," which makes the fact that they had to drag her on stage for the presentation even funnier.  She told me, "They were like 'Get up there!  You know what comes next!' and I was like, 'But I have to get the kids in position!'"-- she was so busy being an awesome Chicken that she forgot to go up and take credit for being an awesome Chicken, and I sort of love that about her.

Her dance went well-- she did a long series of something-e'es' (hey, *I* never took dance--I just shoved my kids on the floor!) that were essentially a series of very artistic moving turns--they were supposed to be the end of the dance, and she was trying to make them until she went off stage.  She ran into a curtain instead, but she was so relieved it was over, she didn't really care.  I was trying to explain to her best friend (who was there to watch her perform) that she was going to be a horrible combination of whiny, bitchy, prickly, depressed, and amped at the end of the show.

"Why?" Stevie asked, and I shrugged.

"She really hates performing," I said.  "Being on stage is a big furry deal for her."

"Oh!"  And Stevie got it.  I didn't so much--I'd always loved performing.  Never really got to a lot--as I grew up and started to teach I realized that the secret of performing was commitment.  I was better at it as a teacher than an actress, I'll give you that, but I still understood--which is why I got a lot of character roles.  But Chicken was always too cynical and self-aware to commit, which is why her song and her dance and her costume--sort of a sweet little extemporaneous LOOKING, swaying to the wind hipster kind of affair-- really suited her well, and Stevie was prepared for the emotional tsunami that was Chicken after the recital.

But as for commitment?

Squish had it in spades.  Squish had the commitment thing down so well, that we all got to see her, in a white leotard and blue tutu, stamping her foot and pointing to tell the girl next to her where she was SUPPOSED to stand.  And Squish was lovely, too.  Her hair was braided on the sides and pulled back into a pony-tail, and she wore dresses and cute hats and... 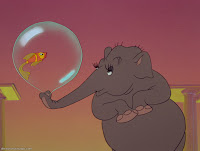 She was our Squish.  Fearless (except of bugs-- bugs scare her these days), opinionated, pretty, perfect, and, very often, dead wrong--but unafraid of being so, because she's only sure she's right--her self-esteem is not necessarily invested on that fact, it simply follows in the wake of her being awesome.

Still, I was not sure how to take my stepmom's assertion that she was just like the hippo from Fantasia. 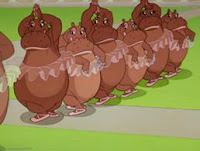 Now see, my first reaction was probably like yours.  "She said my baby's WHAT?"

But then I started to think about it.  I mean, LOOK at those hippos.  They're all girl. There is no compromise, no "Oh, yes, I'm pretty for a HIPPO," or "Well, I shall move to minimize my hippo-ness, because it is unfashionable to have quite so much, arm, hippopotamus in one, erm, tutu, right?  I shall strive to be less of a hippopotamus to make the world feel better about my hips-that-art-part-o-us." 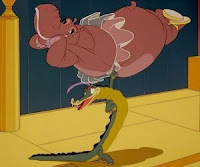 She does not worry that she is not pretty enough for the crocodile, and she shouldn't.  She is ALL woman, and that crocodile does his damnedest to hold her up, because she deserves no less.  She executes all her moves, and lets the creatures around her execute theirs, expecting no less than perfection.

She IS perfection, and if the foundation of the surroundings can't take so much awesomeness, well, that's just IT'S problem, because our little hippo has gotta dance.

See-- THAT'S the way I think my stepmom meant it.

She meant that nothing was going to stop Squish, no skinny stick man crocodile, no spotlight usurping elephant, no nothing.  Squish was going to be the queen, and the prettiest and the best damned ballerina, and the one who by golly knew where the spot was.

So, well, I didn't take exception, because that IS my Squish.

If I find out she meant my baby was fat, I'll be pissed.

Anyway-- that was Squish.  There was also Zoomboy, who FOR ONCE looked like he not only knew where he was going on stage but he also seemed to approve of getting there, and it was a pretty successful moment.

And we barely survived the heat.

It was all right.  And Sunday morning, I got to throw them all on my parents front lawn and send them to play with grandma for three days.  I'll see them tomorrow, and I won't have NEARLY enough work done to show for their absence (well, Mate and I DID spend Sunday going to the movies and going out to dinner like it was our anniversary on Father's Day or something... wait...)

And we'll be all rested up to rock hard with Roxie in Portland!  Roxie sent me some suggestions for what to do on Saturday, when we'll be running around with her and Bucky.  I sent them to Mate for discussion, but, seriously?  It's like the dear woman read our diary.  I'm SO EXCITED I'M BUZZING!  I'm going to meet Roxie, and I already love her to death!!!  Yay! 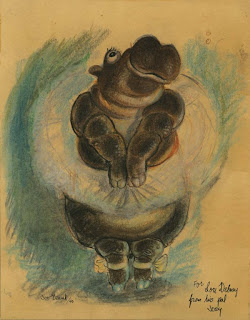 So, like I said, we survived--and I, for one, am never going to think of Dance of the Hours with anything but fondness, for hippos and other dancing creatures:-)

I can hardly WAIT!

You have the capacity to make 3 hour long kids' recitals fun, funny and engaging. Lordy, woman! You can WRITE!

If/when we win the lottery, I want to collect all of you west coasters in one place and come over and visit. I'm jealous.

Recitals can be excruciating but often entertaining. I love the image of the little girls as absolutely self confident in their perfect femininity. I'm going to carry that with me all day.

I don't think you understand the AWESOMENESS of Hyacinth. Yep, that's her name.

I wanted to be her when I grew up. She was the PRINCESS of No Matter What Dance. And fucking hell yes the Prince adored her because she is Fearless.