How to fix a broken "Sposta." 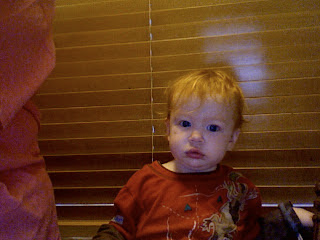 Well, it's been a breathless two days at school, a sort of "I'm talking most of the class and people are coming in during lunch and I've got a meeting afterwards" sort of two dayd, and, with the a/c out in the Lane family crapmobile, it's been a "claw your way through traffic with the windows open in the 95 degree heat" sort of commute. So when Mate said he had to work late tonight and I was on for dance lessons w/Chicken...

Well. My "Sposta" shorted out.

I mean, technically, I was "sposta" get home, do the dishes, shuttle Chicken w/the young-uns, pick up dinner for the older-uns on the way back, and, in general, be a good citizen, and I think if the a/c hadn't gone fukyabyebye I might have achieved that state of activity usually reserved for chickens after beheading and before actual brain death. But the a/c DID go fukyabyebye and there WAS a new pile of purchases from amazon.com on the table, and all of a sudden, there I was, llying on the bed, chin deep in unfolded laundry, and armpits deep in the newest Charlaine Harris while the little-uns laid on me and watched a Disney movie. I don't know what the big-uns were doing, but I suspect it was school related, so good on them.

Now see? Does that sound like a woman with a good-working "sposta"? I mean eventually it flickered on. I washed the young-uns, put the most evil and destructive one away in her wooden cage and left the older, more indestructible one at the tender mercies of his *ahem* kind older siblings and took off for sustenance (because my brain matter was too decayed to make so much as a quesadilla or open a can of chili). But after hunting down and killing a couple of burrito bols, it became painfully obvious that the "sposta" was still a little busted, because my uncle and his son (only a few years younger than Chicken) were also at the great Chipotle hunting ground, and I found myself talking to Phil like I hadn't done in a while...and I enjoyed it. So what if the Cave Troll was watching Monster's Inc for the billionth time while I was gone--he needs to take notes so he knows to laugh at the monsters when the root out from under his sister's crib and start eating his toys.

I mean, I haven't seen Phil in MONTHS...and I would have just blown off that chance to talk to him if I hadnt broke my "sposta". For that matter, I would have missed out on a really excellent Charlaine Harris book (for those of you who like Harper Connely and Tolliver Lang, there's a spoiler coming right about here--

And I also would have missed out on Ladybug, just leaning against me with her juice box, completely content to chill and have her hair stroked, with the Cave Troll resting his chin on my hip, both of them entraned by Mike and Sully and the hidden lives of scary monsters.

And now I'm wondering if my "sposta" didn't short out because it's been like a lightbulb left on too long...I mean, that's what happens when you burn something out, right?

So tomorrow, I'll wake up and hustle to my expulsion hearing bright and early, leaving the young uns with Mate, and then I'll come home and probably mooch around the house on my stolen sub time and nap in my knitting chair intermittently while feeding and hugging the little uns. And when the big uns get home, my "sposta" will be all charged up and ready to go, and I'll be good with that.

Maybe, sometimes, we just need to give the damned thing a break before it breaks on us, right?

Yeah...I think that could be one of the most important rule in the owners manual for care and feeding of the modern human "sposta", don't you?
Posted by Amy Lane at 10:20 PM

Expulsion hearing? Ooooh, fuck. May the vainglorious prickweenies of the world be forced to eat their words.

Actually, I think you used a neglected part of the "sposta." After all, you're sposta nurture yourself, too. And it's about damn time.

You're not saying that Toliver and Harper FINALLY..... I love those books!!!

Student is getting expulsed? Right? As for the rest of your post, sorry, only "heard" one thing: There's a new Charlaine Harris?! Squeeeeee!!

My sposta's all packed and sitting at the back door waiting for its taxi to Logan tonight. I can feel it coming -- a post-Little Gym dinnertime trip to Starf*ckers for a big slurpee coffee for me and a cookie with the same circumference as her head for the Jujube. Ah, dinner. My daughter. A Type 2 Diabetic in the making. Thanks to her mommy's fizzling sposta.

To me, it sounds like you was sposta stay home and relax.