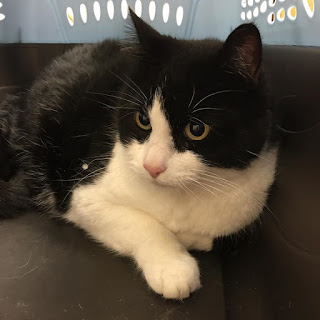 So, the kids were going to put the cats in their crates this morning, while I stole another half-hour of sleep, but things didn't go as planned.

We were all thinking, "We've got two crates, one of them's big-- we can probably just put two cats in the big crate."

But the two cats were too big to room together in the big crate, so they tried to put one cat and then the other in the small crate, a crate that has crated all our cats for about twenty-five years.

Apparently not these cats anymore. These cats were far too large for this little crate, so I said, "Fuck it-- Steve's got a dental cleaning, it's a bigger appointment, I'll take her!"

Dewey, that little shit, got to flounce out, fluffing his ruff and tail as he went. "Little does he know!" I thought. "I am going to make another appointment for him AND Nebula today! That'll show him!" And I did.

So I took Steve and got a call that they were going to do her dental cleaning in an hour right before I went to pick up kids. I picked up kids, came home and napped, and when I woke up, there was a panic message on my phone.

Her temperature spiked, oh no, they couldn't put her under, and then her blood pressure and her blood glucose and omg she's never reacted to opioids like this before and--

And I called them back and they were like, "Uh... how about we do this tomorrow."

I was like, "Okay-- since we've got an appointment for Dewey tomorrow at nine, we'll just slide Steve into that spot, and I'll bring Nebula too."

They were like, "Okay-- that's convenient," and so we're planning to do that.

But Steve looks sick and sad and mad. And they don't want to charge me anything-- they're thinking they don't have to do a bunch of stuff over, so this will all go on the plan, but I'm like, "You know, if she's not up to it, maybe we just put it off for three months until she feels better. Cause I know what it's like to not be up to some fucking bullshit and I'd just rather not."

So tomorrow, Steve may be back at the vet's office. But I swear, if she's not happy tonight? Im just putting Dewey in the car carrier because he's due.