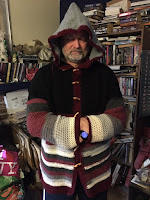 Okay... so, two nights ago, I finished Safe Heart, the third in the Search and Rescue series, and it took an extra long time because A.  Christmas, and B. Sick. So yesterday I did a Patreon story, and tonight, I... well, I finished another project.

Like Safe Heart, this one had a Christmas deadline--and I sort of missed it. In fact, both the projects you see here were for Christmas. 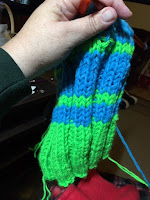 The sweater was for Chicken's bestie, Stevi, and I was super honored she asked me. She picked the colors (from my existing stash) and I loved crocheting it. I had Mate model it first, and he did his Jedi-Master pose, because the sort of lush hood makes it seem very Jedi-Masterish.

So two years ago I finished ZoomBoy's sweater--and he's worn it to school frequently since. He asked for the colors, and picked the finishing touch--collar vs. hood, cardigan vs. pullover, etc--and I love that he loves this sweater. 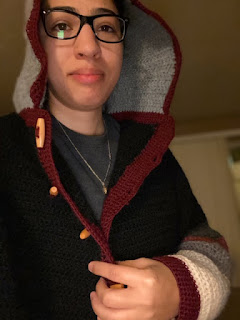 Well, for Christmas, when we told the kids things were going to be a little thin, I asked him what he wanted. He'd JUST finished borrowing my Christmas scarf--made by a student, so it's been around a while--and he really wanted a scarf of his own.

"I want it to match my sweater."

Oh my God. OH my God. My retina had hardly healed, I shit you not.

And, I have to admit, I was OVER crochet after finishing that sweater, so I knitted the scarf, double stranded and extra wide. I wanted it to be super lush. 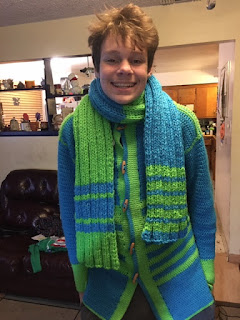 When I got to the end, I remembered that the stripe pattern on the sweater was asymmetrical. The pattern on one side was purposefully different than the pattern on the other. Looked very avant-garde and, well, 80's, since we were going neon. I echoed that in the scarf--and it's more noticeable in the scarf because I threw the colors in relief. So today, in the spirit of finishing things, I took a little time off of the grind and shotgunned Leverage which is an AMAZING show, and finished the scarf. I've got a pair of socks to go, and then I can make my son's girlfriend a shawl, and my friend a VERY belated birthday present.

So there you go--I really DO knit and crochet and yarn still. Sometimes I forget that's still a thing, even though I do a little every day.

Oh! Speaking of knitting--Mate Skyped from Vermont tonight. He was wearing the sweater I made him, because... well, probably because I made it and he wanted me there. People ask me why I don't sell my yarn wear. For one thing, I"m super slow and my family would starve. But for another, finishing things is not really my strong point.

I think my family saves every sweater, hat, and (mostly) pair of fingerless mittens because they know I finished that object out of love.