The brain cloud captain--she has frozen! 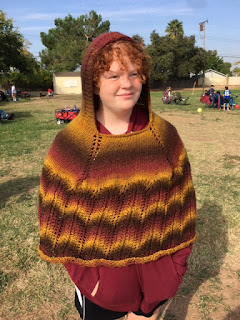 So, on Wednesday I leave for a two destination trip--and I have to admit, it's got me sort of... uhm... wobbly.

See, this weekend was a soccer tournament.

A very long, very sad soccer tournament. Squish's team lost all four games in two days, Mate's boy's team (younger, with shorter games) lost all four of their games in one, and I lost two days to sitting in the middle of a soccer field, knitting.

Okay-- talking to the moms and Mate which was possibly the best part, besides finishing this hooded poncho, which nobody--repeat NOBODY in my family wants. The girls are both, "But we like PASTELS!" So this will probably go to a random cousin because i had sort of an idea about knitting a big box of stuff for them and sending it and saying, "Just send me pictures!"

But it still looks good, right? Particularly with Squish's hair.

But about this trip...

See, GRL starts Wednesday, and yes, there's a lot of reasons not to go, including expense, but there are people I want to see, and I really need to attend Ethan Day's memorial service, because I've spent the last year missing the fact that he's been out in the world.

But I've also made a concerted effort to make teaching a thing, and my class on conflict was accepted by the ECWC in Seattle for the same weekend, so literally at the end of the signing, I am running away from the hotel at 12:00 and catching a plane at 2:30 for Seattle. The fun part is that I go from rooming with Andrew Grey to rooming with Kim Fielding and since I adore them both, this makes me really happy.

Also, getting into the room with the clothes scares me. Dust. So much dust.

Also, I NEED TO ADD TO MY DAMNED PRESENTATION because I have an hour and a half in Seattle and it was designed for the hour in New York.

Also, I just started a new series for Dreamspun Beyond and I adore it very much a lot but the first few chapters are super hard and really awesome but did I mention the super hard?

Also, have been chronically short on funds and I can't do the "make Amy NOT a troll" thing until Tuesday, when the plane leaves on Wednesday, so if I miss something like a face wax or my roots or getting the squirrel on my head beaten into submission or my ratty toenails, well, there's still a human under all this crap, I swear.

Also packing is going to be sort of weird and I'm debating whether to bring books or too much swag or not enough swag or oh my God what clothes am I packing again?

WAIT? DID WE GET HIM A HAIR CUT AND HEM HIS PANTS? 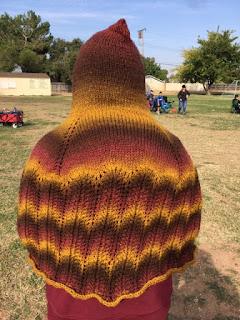 WAIT!! I NEED TO PRACTICE MY READING FOR GRL!

What am I reading? Oh God. I can't decide. What should I read? The new Jackson?

ALSO FISH ON A BICYCLE IS OUT TUESDAY!

Shit. Is that right? DO I HAVE A RELEASE ON TUESDAY?

*buries head in hands*  So, uh, can you tell the brain cloud has frozen?

Here. Enjoy pictures of Squish modeling this super cute hooded poncho that looks super cute on her that SHE DOESN'T LIKE. You may notice where we are as she models it. Would that be... yes! Yes, I do believe it was... WE'RE ON THE FUCKING SOCCER FIELD.

Because of course we were.


And if anyone has any suggestions for what I should read on Friday, let me know. I should probably practice that.

Shit. Yeah. I really should.

I love those colors, I think you did a wonderful job knitting that

This may be a time to mail your clothes to the hotel in Seattle. Then you can pack a bag with extra swag, which will give you an empty bag for the return from Seattle.

I have found that once you get inside a building, you can't tell what season it is. I used to wear the same business clothes to Canada in Feb as Mexico in July because the buildings were kept at the same temp--in fact, the buildings were often colder in July (because of the AC). Since I carry a few extra pounds, I tend to overheat, so I usually dressed in light to medium weight clothing and brought an lightweight sweater in case of overactive AC. For managing the outside temperatures, you will need to bring a heavier coat to Seattle, but unless you plan on walking to the venue, you won't need anything terribly heavy--a lined raincoat should be sufficient.